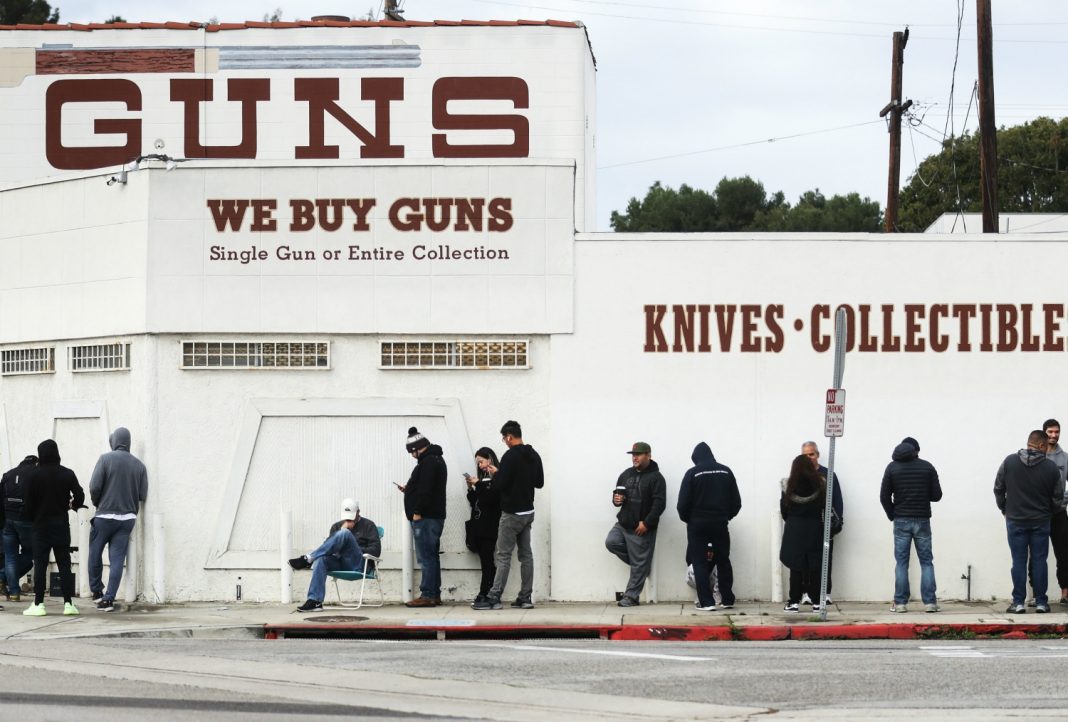 Toilet paper and hand sanitizer aren’t the only commodities that Los Angelenos are panic buying to cope with coronavirus fears.

All across Los Angeles, from Culver City to Burbank, gun sales are booming. Long before compulsory social distancing became a reality in California, gun stores were already selling out of ammo and staying open late to accommodate a panic-driven run on their wares. According to gun shop personnel, most of the rise in demand is being driven by first-time buyers, including many who have never fired a gun.

At Gun World in Burbank on Sunday morning, there were 40 customers waiting in line on the sidewalk when the shop opened at 11 a.m. Two hours later, the manager was already turning customers away. Gun purchases in California are slowed by paperwork—from gun registration to a written gun test—which kept customers waiting around for hours after money had changed hands.

It was the day Italy announced a record one-day death toll of 368 from the coronavirus—just hours before the Mayor of Los Angeles would order bars and restaurants to close as a protective measure—and anxiety was in the air.

Most of the rise in demand is being driven by first-time buyers, including many who have never fired a gun.

“If you folks want to put down a deposit on a gun today, you’re welcome to remain in line and come back tomorrow to fill out the paperwork,” the manager said, holding out his latex-gloved hands in a gesture of calm to the people still waiting in line. “If you’re trying to buy ammo, please step forward.”

One latecomer protested that this was the second time this week that the store had turned him away empty handed. “How early in the morning do I have to get in line?” he wanted to know.

“We ran out of ammo two weeks ago,” said a manager at a nearby Burbank gun store, Aegis Trading Enterprise, who declined to give his name. “People came in and bought everything we have on the shelf.”

He added, that “out of good conscience” he has refused to sell inexperienced shooters anything more powerful than a 20-gauge shotgun, which has minimal recoil.

“No time to talk,” said Joe Ferrero, owner of Gun World, which carries every major manufacturer’s line of firearms and most smaller makers as well. “I’m serious. I’ve got customers lined out the door,” he said.

As images of the crowd outside Martin B. Retting gun store in Culver City circulated on social media, motorists would slow to a drift on Magnolia Boulevard and gape at the bizarre scene outside Gun World in Burbank. Some took out cell phones and filmed in disbelief. One pedestrian edging through the crowded sidewalk called out, “It’s not the zombie apocalypse!”

The array of face masks in the crowd were not entirely to prevent the spread of the coronavirus. Ranging from paper surgical masks to headgear reminiscent of Bane’s in The Dark Knight Rises, they were also useful to protect one’s identity. This is L.A., after all, and some people were rather sheepish about exercising their right to keep and bear arms.

One manager said that “out of good conscience” he has refused to sell inexperienced shooters anything more powerful than a 20-gauge shotgun.

“You’re not going to describe what I look like, are you?” asked a young screenwriter from Burbank who was wearing a corduroy cap and Warby Parker frames along with his N-95 respirator mask. “I told my wife not to even mention to my friends that I’m doing this.”

In the news vortex that has formed around the coronavirus, the longstanding social taboo against gun ownership in L.A. is losing ground to doomsday imaginings. The screenwriter was seated on a bench beside another “creative,” a music producer from Hollywood, who kept making references to the 1992 L.A. Riots and the AMC hit TV show The Walking Dead. The music producer declined to give his name and admitted the surgical mask was intended to conceal his identity. Owning a gun, he said, “is not really my brand.”

The anonymous screenwriter was waiting on a Mossberg 500 shotgun for “home protection” and a Glock 19 pistol “for the car.” Although he and the music producer said they’ve fired a gun at a shooting range for fun, neither had ever purchased one until today. The music producer was waiting to register his new Glock. “Things will get crazy if people are out of work for too long with no jobs,” said the music producer. “Like the L.A. Riots and shit.” A man who identified as a police officer in training imagined a scenario akin to the overwhelmed first responders in New Orleans after Hurricane Katrina.

“Were you here in L.A. during the Northridge earthquake?” chimed in Dean Almalla, 63, of Sherman Oaks, who was nearby waiting for the paperwork to process on his first gun purchase, a $400 Smith & Wesson. “You would call the police for hours and hours and nobody answered.” Almalla’s son Mohammed joked that his father’s recent Dirty Harry-brand handgun purchase was “to protect [his] toilet paper.” His nephew, Kal, meanwhile, appeared to endorse the internet conspiracy theory that the coronavirus is linked to exposure to 5G wireless technology. “You should look into it,” he told me.

Inside the shop, the phone was ringing nonstop. “Is anyone gonna answer that?” asked a San Fernando business analyst who was waiting to be helped amid racks of AR-15s and carousels of hunting rifles and shotguns. The man, who gave his name as George, was with his 24-year-old son Patrick, who said he would prefer a gun that shoots nonlethal rubber bullets. “Yeah. We’re not doing that,” his dad said.

A big, bald, and goateed employee from the ammo department moved a family of four to the side as he hurriedly photocopied someone’s driver’s license. The mother, a platinum blond from Encino named Joanne, said she hated guns but was afraid of what could happen when she was home alone with her children. As she filled out paperwork for two handguns, she argued with her husband about whether the couple’s six-year-old son was too young to fire a gun at the shooting range.

“You don’t have the virus,” the father told him.

The father, an Encino attorney in his 50s named Sal, described himself as a Joe Biden supporter and “gun-toting liberal.” He blamed President Trump for the anxiety on display at the store. “When Trump is on TV downplaying the virus, and the medical experts are shaking their heads and then correcting him later, that causes anxiety,” he said. “There’s going to be a lot of people doing stupid things.”

Ferrero, the shop owner, said the store which normally closes at 6 would likely remain open an extra two hours that Sunday to accommodate the rush. He compared the recent surge in demand to the Obama-era ban on assault weapons.

The phone on the wall stopped ringing just long enough for someone to remark that it had stopped. Then the continuous ringing started again.

For the past two weeks, the gun-store lines have been a regular feature of life in Burbank.

“The only thing that spreads faster than the flu is panic,” observed a sales manager as he completed a customer’s registration form.

When was the last time the store was this busy? I asked.

RELATED: All L.A. Bars, Gyms, and Movie Theaters to Close at Mayor’s Order