Home Urban Development An Aerial Tram Could Move Visitors Around Griffith Park, but Not Everyone... 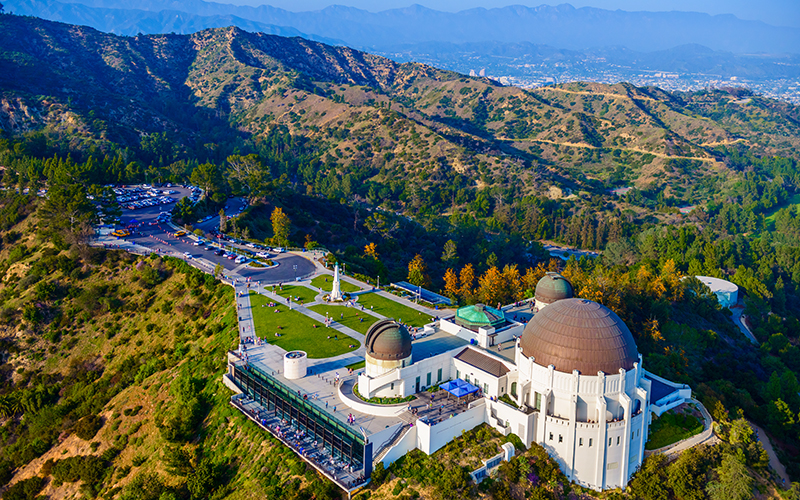 The city is considering a Griffith Park tram system that would shuttle visitors around the vast urban park, offering them aerial views of the landscape and easy access between various attractions. But, as consultants working on the project reveal new details about possible routes and what might go into constructing the tramway, conservation activists are renewing their criticism of a development they think could permanently destroy Griffith Park’s natural environment.

“What is at stake is a massive, commercial infrastructure system that will have permanent, far-reaching, and devastating impacts on the park,” reads a statement from the nonprofit conservation group Friends of Griffith Park.

Griffith Park tram proposals date back to 1942, when the idea was first floated. Pre-construction work began at the top of Mt. Hollywood, but the project was put off amid the war effort and never completed. Proposals for trams popped up again throughout the 1960s as car traffic congestion grew at various parts of the park. Each time, ideas were ultimately nixed following outcry from locals.

The concept returned in 2003 as part of a Griffith Park Master Plan that also included a hotel, school, and additional commercial attractions. Negotiations on that Master Plan among stakeholders and politicians continued until 2014.

The conversation about building a tram seems to have begun around 2017, when a group of private investors–among them, billionaire mogul Barry Diller and his fashion designer wife Diane von Furstenberg–offered to pay for an aerial gondola connecting the L.A. Zoo to the Hollywood Sign. They suggested the idea as a possible response to legal wrangling between the city and residents of homes near the sign who were complaining about congestion. After that, Warner Brothers stepped forward with their own privately funded concept which would have placed the terminus at what’s now a parking lot close to their own Burbank studio tour attraction.

In 2018, the L.A. City Council commissioned what is known as the Dixon Report, to propose a number of possible options for easing Hollywood Sign traffic.

“The Hollywood Sign and Griffith Park are being loved to death,” Councilmember David Ryu stated at the time, referring to the increasingly unsustainable numbers of tourists and visitors attempting to stage their perfect photo ops.

Based on recommendations from the Dixon Report, the city brought in Stantec, a private consulting firm, to conduct a feasibility study specific to the proposal of a Griffith Park tram. That study is currently at the second of four phases, the final results of which would be the City Council taking the conclusions under advisement and deciding if they want to move ahead with the idea. Only then would a potential project begin to take shape.

In late August, the Griffith Park Aerial Transit Study released new details about the possible routes they’re looking into, and some new information about what that might look like. It appears they’re investigating four different paths, and would link guests to various locations within the park, as well as a new Hollywood Sign viewing platform that would be constructed as part of the project.

Urbanize Los Angeles reports that, depending on the route selected, the system would ultimately consist of between 21 and 25 individual tours, and offer total ride times of around 12 minutes. It’s estimated that the tram would move anywhere from 3,000 to 13,000 passengers each day.

Friends of Griffith Park opposes all versions of the proposal, which, the group says, would require miles of cables obstructing views and causing gondolas to sway above humans and wildlife that seek out the park for its natural beauty. They’ve also raised concerns that the fee-based tram may only compound the commercial and tourist draw of the park, potentially at the expense of local residents who use it for outdoor recreation.

“It is difficult to mentally grasp the enormity of such an ill-advised proposal,” a statement from the group says. “The park has faced numerous threats over the years, and while trams are not a new one, this proposal is here, now.”

Currently, Stantec is accepting public comment in an online survey and, on September 3, will hold a community open house via Zoom for interested parties to share their thoughts on the tram idea.

RELATED: It Was a ‘Summer of Kittens’ in the Santa Monica Mountains