Home Architecture Homes That Look Like Big White Boxes Have Taken Over the Westside’s... 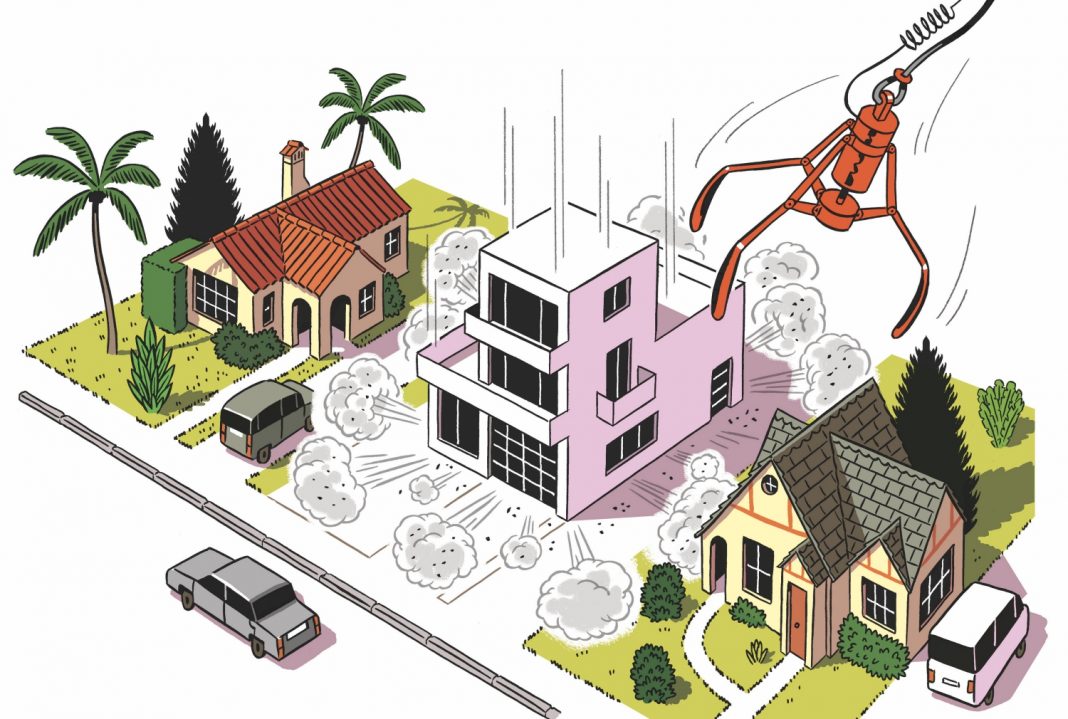 The big house on the next block rose in 2014, startling in its size, its whiteness. The design was simple, almost austere—two rectangular stories and a balcony, the stucco expanse broken only by three wood-framed windows. In an older, mostly modest Westside neighborhood five miles east of the beach, it seemed an aberration. In fact, it was just the start. Today clones of that house stand on every street, hulking white squares, sometimes accented with black or gray, sometimes with wood. Inside they have five bedrooms and six baths, open floor plans and floating staircases along with a bonanza of window glass. The realtors’ fliers that regularly arrive at my door announce them as the latest and best in “modern” architecture: “luxury modern,” “coastal modern,” “modern masterpiece,” “reimagined modern designed jewel.”

The Great White Box (as I call this style) is slowly but inexorably transforming where I live. Its cookie-cutter looks and the astronomical prices it commands—most recent peak: $2.8 million—have filled me with wonder. All the boxes near me were built on spec by a constellation of individuals, companies, and mysterious LLCs. How had they all simultaneously decided to build nearly identical houses? In a city where the median home price is about $700,000 and median household income less than $58,000, that’s a 5-percenter question for sure (though—as GWBs spread through Venice, Mar Vista, south Santa Monica, Culver City, West Hollywood, Beverly Grove, and even parts of Portland, Seattle, and Vancouver—not an idle one). It’s pretty clear how a fashion craze takes off: A model or celebrity wears a dress, TV and Instagram explode with images of it, H&M cranks out a version for $29.95. But who and what was behind this architectural steamroller? What human first gazed down the block of an aging postwar tract, slapped his or her forehead, and shouted, “By God, what this place needs is a box!”?

If there’s a specific person or dwelling from whose loins the GWB sprang, I never found it. The realtors, designers, and builders I asked seemed taken aback by the very question, replying with, essentially, “Dunno, but not me.”

“We’re not trendsetters,” said Jay Lappen of the Riviera Property Group, a six-year-old investment company specializing in new construction, particularly west of the 405. Small-scale West L.A. builder Yigal Sadgat was even more blunt: “I have no idea. I just follow what houses in the area have been selling. I put my finger in the air and see which way the wind is blowing.”

The GWB seems not to have been planned as much as to have materialized out of a powerful cultural-economic convergence—think of those spots in the ocean where opposing currents smack to create monster waves. Building big is nothing new. Homes in L.A., as in the rest of the U.S., have been expanding for decades, even as the number of people who inhabit them shrinks.

In 1950 the average single-family American home was just 983 square feet. And even the latest round of local fighting over how big is too big is more than a decade old. The urge to demolish older homes and replace them with something grander spikes during economic booms; cases in point, the 1990s and early 2000s. In 2001 the Los Angeles Times reported that a recent demolition binge of 1,211 homes per year, or around three a day, had created a new sort of “ghost town in the city.” Stupendous, architecturally ambiguous McMansions replaced those specters, especially in some of L.A.’s pricier neighborhoods. In 2008 pushback from preservationists and neighbors left in shadow led the city to pass a “Baseline Mansionization Ordinance,” which aimed to put some limits on home-to-lot ratios. Tweaks and updates to the ordinance followed in subsequent years, each igniting fresh debate.

The current rush to bulldoze ’n’ build has unfolded at an even more frenzied pace. Nearly 8,000 L.A. residences were replaced between January 2013 and June 2017 (that’s an average of five a day, around half on the Westside.) Literally hundreds of the new homes, at $2 million per, have come from a single developer, Aliso Viejo-based Thomas James Homes, which Builder magazine admiringly called “one of the nation’s largest tear-down, scattered-lot, production builders.”

Since developers monitor what sells, these spec houses share a pattern, though three dominant variants seem to have emerged: the Cape Cod, with a steeply pitched roof and “coastal” feel; the Modern Farmhouse (slightly more rustic); and the GWB. All are white, feature open floor plans, and hit new levels of gigantitude. When the anti-mansionization movement began, the median size of a new L.A. home was 3,520 square feet; that’s where these babies start.

A cube is simple to construct, can be plopped almost anywhere, and accommodates the requisite bells and whistles an upwardly mobile buyer demands

Unlike the Cape Cod and Modern Farmhouse, designed for family living—“My builder won’t do a ‘modern’ here because it won’t sell,” one realtor told me at a Cheviot Hills open house—the GWB targets the two-income, no-kids hipster market. And it’s no coincidence that unlike its McPredecessors, known mostly for their size and opulence, the GWB uses the description “modern” to claim an elite aura and pedigree. (GWB style may be called “modern,” “modernist,” or “midcentury modern,” terms that have real and different meanings but that have become sloppy shorthand for anything with a flat roof and white walls.)

Modernism is one of L.A.’s few native architectural aesthetics, observes Dana Cuff, director of the UCLA architecture think tank CityLab. “The indoor-outdoor living that’s part of the modern tradition is a California model,” she says. It’s also one with zeitgeisty cachet. This popularity has varied roots: Mad Men, Dwell magazine, Design Within Reach, the casting off of maximalist ’90s glam for simplicity and vast expanses of white, and even the clean, spare lines of Apple products. More to the point, the style’s most passionate adherents are educated, wealthy, and youthful. Mollie Carmichael, a principal at the real estate, data, and technology advisory firm Meyers Research, pointed me to the results of her company’s survey of more than 6,000 new-home shoppers. Younger buyers overwhelmingly wanted a home with a “casual contemporary” interior and “modern” exterior, a preference, Carmichael says, that was especially strong in the “more affluent price points.”

Which brings us to Venice, possibly the GWB’s ground zero. Geometric neomodern architecture appeared here in a dramatic way in 2003 with Mark Mack’s Bay City Lofts, and it was a style well suited to a community that had money, lots too small for sprawling homes, and a reputation to uphold. In 2007, for example, a $2.25 million, three-story modern with a music studio, media room, and roof deck squeezed 3,154 square feet of living space onto a 2,250-square-foot lot. But it was the arrival of tech firms in 2010 and after that brought hordes of modern aficionados, “dual-income, educated, frankly moneyed buyers who were moving to L.A.,” as Joanna Leon, a designer for Riviera Property Group, described them. “Young buyers who loved contemporary design and wanted something that was very highly curated.”

As neomodernism spread through coastal neighborhoods, then into an increasingly large adjacent area that real estate magic made part of Silicon Beach, curation—perhaps inevitably—gave way. The architectural firm Marmol Radziner has specialized in modernist work for several decades and is known for a careful restoration of Richard Neutra’s 1946 Kaufmann House in Palm Springs. True modernism, in which a house and its setting exist in harmony, “is less a stylistic response than it is a way of living…a philosophical perspective,” founder Leo Marmol wrote in an email. It’s “about proportion, efficiency of materials…the relationship of the interior to the exterior garden.” Doing it right, he emphasized, requires “rich, deep, thoughtful design.”

But when 8,000 homes have been torn down to make way for updated models, and the point is return on investment (not artistic vision), rich, deep, and thoughtful is not a viable option. It’s not as easy as you might imagine to make money on a spec house, longtime Westside realtor Ron Wynn told me. He explained the economics: Take the cost of the teardown, the price of construction, the interest on the cash you must borrow to buy and build, and closing costs/commissions for selling the finished product—and putting up a 3,000-square-foot house in a hot Westside neighborhood will quickly set you back a few million. If you want to turn a respectable profit, you need to build something that goes up smoothly and sells fast. A cube is simple to construct, can be plopped almost anywhere, and accommodates the requisite bells and whistles an upwardly mobile buyer demands: en suite bathrooms, big closets, a kitchen full of gleaming quartz and chrome. Standardized plans and inexpensive finishes also save money.

Perhaps the resulting homes aren’t really a “slow, steady cancer upon the landscape,” as Marmol has called them. Yet the irony is that even as historical modernist designs are found wanting—in 2013 the Pacific Palisades Kingsley Residence that was the last unaltered home designed by J.R. Davidson, a Neutra and Rudolph Schindler contemporary, was flattened and replaced by an $11.7 million “modern traditional estate”—the postmodern “modern” flourishes. Still more ironic is that a sophisticated demographic, one whose members wouldn’t dream of buying something that might be called a McMansion, have embraced something equally as generic. “A pile of geometric forms that maxes out the building envelope in order to market at the highest price,” as Cuff put it. “A minimal articulation. The crust of a style.”

Earlier this year I went to open houses at two nearby GWBs, asking prices $2.3 million and $2.7 million. They were big, blandly pleasant spaces, pale wood floors and a palette of black, white, and cream. Every bedroom had a walk-in closet and a bath, and the two master baths were huge, each with a freestanding soaking tub. Multiple sliding doors opened to rooftop decks and rear yards. It was churlish of me—who couldn’t afford either house—to notice the cheapness of the windows, the stark, treeless landscapes. One home’s second-floor deck offered a view of the 10 freeway.

Whatever. A GWB that set neighborhood price records in 2015 sold again this year for $300,000 more. A five-minute walk away, a tiny pink ’50s house with a bay window had sold in nine days for $1.27 million, and the construction fence with a demolition notice was already up.

“The demand right now for a $2.5 million, 3,500-square-foot house on the Westside is tremendous!” Wynn says, practically shouting. “It’s overwhelming!” Architecturally, he acknowledges, maybe GWBs “aren’t so pretty. But builders will stop building them when people stop buying.”

RELATED: How the Architect Behind the Lucas Museum Is Crafting L.A.’s Future