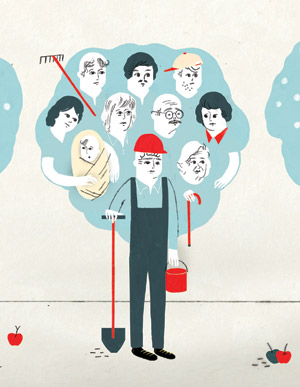 If you live in the same city all your life, as I have here, you tend to see it not just as it is but as it was. You are constantly looking through a divided lens. Even for those of us who are inured to nostalgia—and I pride myself on not yielding too much to that emotion—there are inevitable comparisons between past and present that arise at almost every turn, at any moment, on any drive or any stroll.

This is—no question—a far, far different city from the one I grew up in, from the one a lot of us grew up in. At the risk of sounding wistful (I am not going to succumb to full backward longing), I do yearn for the days when you could get from one end of L.A. to the other in maybe 20 minutes on the freeway. How I loved driving then (and how I hate it now). Development hadn’t gone crazy. In my neighborhood, as in many others, houses were size appropriate; they were not the jammed-on-the-lot villas that are everywhere on the Westside. The boulevards were not lined with anonymous apartment buildings or squat, aesthetically challenged minimalls. The decibel level was much lower: fewer jackhammers and sirens and people gossiping on their cell phones. There was more elbowroom, and you could see the stars at night.

Let me not sound too rosy. There certainly have been anti-immigrant rumblings, largely about those from Mexico and other points south. L.A. is almost 50 percent Latino; the public schools, 75 percent. You hear complaints about the bilingual nature and feel of the metropolis—a sense from long-timers of being overrun, even though it’s not proper to give voice to that sentiment in public. But the topic that bedevils this place, toys with its new tolerance, causes neighbors—sometimes even spouses—to squabble, is illegal immigration. After a kind of quiescent stretch (during which the city basked in relative racial peace), the issue is back on the front burner in part because of the recent Arizona law and in part because of the current budget cuts and an ongoing threat of terrorists slipping across our porous borders.

We have tended to live in a state of truce—with the undocumented and with our consciences. Through the years many an otherwise law-abiding citizen (I include myself and most of the people I know) has hired someone who is here illegally: a gardener, a nanny, a day worker from in front of Home Depot. We don’t raise the subject of papers—we look the other way. We’ve been a “don’t ask, don’t tell” city for as long as I can remember. We smile and say thank you and pay in cash. We are grateful because we get off easy—no need to fill out tedious forms and dole out social security taxes and go through the rigmarole of an aboveboard transaction. Have I felt guilty about doing this? Do most of us? Sometimes I do; sometimes we do—in fits and starts. Mostly we content ourselves with the thought that this is a win-win bargain. I know people who have been vociferous about the impact of the undocumented on local services like schools and emergency rooms. Still, these people have on occasion, with a bit of willful ignorance or denial, employed someone they knew down deep (or not so deep) was not on the right side of the law.

Now the lid is off. Everywhere I go there is talk about the dilemma we face and the choices we must make. You can feel a tension that wasn’t there a few months ago. To me, the shift is strangely positive while also being unnerving. What we have been doing is not really fair to anyone: Employers and employees, citizens and noncitizens, are tiptoeing around waiting for something to happen, for a shoe to drop.

One thing is inescapable: Many are fearful. I hear stories about people who came here years ago without documents and have made good lives. Some were lucky and won amnesty under President Reagan in 1986. Others missed that, but they have been working in L.A. and paying taxes for more than 20 years and in every other way have been mindful citizens. They don’t know whether to rush to lawyers and start on the arduous road to legal residency—thus outing themselves—or hang tight.

Then there are the kids who were brought here by undocumented parents and are afraid they might be deported to countries they don’t remember. Others crossed the border on their own—like many before them—toting big dreams they cannot realize in their own lands. I run into two at a public high school in Pico-Union. They are the star students. One lovely young woman tells me how she arrived five years ago from the Philippines with her parents. She says she didn’t even know they were illegal until she started applying to colleges. She has been accepted to a terrific private school with a generous partial scholarship, but she can’t apply for state or federal loans—or a job—to make up the rest of her tuition. Her father recently left to return to the Philippines, and her mother, who is working three jobs, is undergoing chemotherapy. She is full of both sadness and drive. A young man, the class valedictorian, entered California with his brother four years ago in order to receive the education he says he could never afford in Mexico. Now he is scared, and he’s also mad and full of moxie. He is tired, he says, of living in the shadows. “Those of us who are illegal are misperceived,” he says. “We can do great things if we get the chance. We have to contribute and see solutions as a community.”

Some people will have no sympathy for these kids. I hear from them, too—in person and on the airwaves. They talk heatedly about how illegal immigrants are a drain on the economy. A search through the economic data suggests, however, that undocumented workers are in fact a net plus and that many give back to the system through retail sales and the taxes withheld by their employers. I am struck by the vehemence expressed by some of my friends. “They broke the law,” a pal tells me when the topic of illegal immigration pops up—right there, with the first sip of wine. “I don’t think that’s right.”

Diverging opinions are also apparent among Latinos themselves, some long-established residents who evidence little sympathy for the newcomers. The owner of a small construction company—his employees are foreign-born Latinos, and all have documents—says he’s underbid by men willing to work for less because they don’t have papers, and he worries for the livelihood of his workers.

Obviously there is rancor, but there is also a palpable sense that Los Angeles doesn’t want to be torn apart by this issue. Figuring out what is right—that’s the trick. There has been, to my ears, a move toward consensus, a repugnance at the thought of deporting the hundreds of thousands who are already in the city, a desire for a workable path to citizenship. Recent statewide polls on illegal immigration indicate a sea change in attitudes in the last 15 years, a shift from the punitive toward the tolerant, a trend that is driven, pollsters say, by people 25 and younger. They are growing up in the new L.A. Driving through Silver Lake or walking down a sidewalk in Venice, I watch the sassy multiethnic spill of the young with envy, for their energy and openness, for the way they chat and laugh and flirt with one another, for the city they are inheriting and transforming. I am inclined then to moments of optimism, to the hope that we have indeed entered a postracial period of stability and balance.

I look out through my old eyes as well, through the other half of the divided lens. Oh, how my homeland has changed. An academic I talk to calls Los Angeles an “unfinished city.” He says he knows that some might find that idea hard to embrace, the notion that in effect everything will keep evolving, that there will always be newcomers, that none of us owns this particular piece of earth, no matter how deep our roots. The letting go, the acceding to the new, I have learned to do in my years here. But the challenge is constant, almost existential. On most days I am up to it.