Home Politics Granola and Government: Eric Garcetti’s 10 Most Tweetable Quotes From This Morning’s... 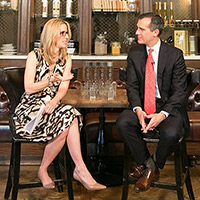 His schedule may be tighter than Brad Pitt’s during Oscar season, but still: the guy’s gotta eat. Mayor Eric Garcetti joined us this morning for granola parfaits and salmon tartines at Public Kitchen and Bar as part of our Breakfast Conversation series to discuss everything from earthquake safety (timely) to the issues that keep him up at night. Moderated by our editor in chief Mary Melton as part of LAmag.com’s ongoing video series Big Shots, the chat focused on civic stewardship and the future of L.A. Being the savvy Tweeter that he is, we thought we’d compile our favorite 140-characters-or-less sound bites from the morning’s festivities. Here are 10 of his most Tweetable quotes (hashtags not included).

On L.A.’s tendency to be content in its disconnectedness:
“I worry about putting the pieces together. I hope that we’ll realize we’re one city across all of these boundaries.”

On Angelenos being open with him about their needs:
“What is important to the Angeleno’s quality of life? You need to hold me accountable for it.”

On investing in the LAUSD:
“All of us need to own our public schools. We’ve turned them into islands.”

On L.A.’s consistently poor voter turnout:
“An election is the reflection of the work done between an election.”

On the image L.A. gives off to visitors:
“L.A. should hit you when you arrive here. Instead, we hide it.”

On the ways young Angelenos are changing the transit climate:
“Kids these days don’t want cars. Bikes and public transportation are already part of their culture.”

On his vision for education:
“Rather than argue about control, let’s align education with our economy.”

On L.A.’s ongoing dry spell:
“I’m not worried about the drought. I’m focused on it…we have plenty of water here. We really do.”

On his mayoral m.o.:
“My strategy is being a back-to-basics mayor and making City Hall work.”

On boldly proclaiming our city pride:
“We’re so good at publicly bitching about what we hate about L.A. We need to talk about what we love.”

All photographs by Jennifer Fujikawa