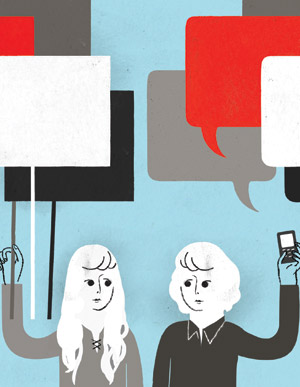 The TV footage showed chanting students and cops with billy clubs. I figured the broadcast was from a foreign country or an earlier era. I hadn’t seen this kind of confrontation in a long time. Not only were there demonstrators, but they were on the grounds of UCLA, just up the road from where I live. I was mesmerized. What had lighted this fire?

A tuition hike—rather spike, a full 32 percent—as it turns out. The regents were on the university grounds to vote on an increase that would raise annual fees to $10,300 a year, which doesn’t include housing or books (I know a couple who pay $25,000 a year to send their son to UC Santa Cruz). An angry crowd had come out. The activists tried to block the board members from leaving the building where they were meeting. This was intense stuff, with comparable protests at several other UC campuses. It’s one thing to see Berkeley and Santa Cruz up in arms, but this time UCLA was astir, too.

I am a product of two of those institutions. Following high school in Los Angeles, I went east for a year, thinking it would be good for me, broadening. But I was completely disoriented, particularly by the long gray winter and what felt to me like East Coast snobbishness, and I hurried back west, landing first at UCLA for a couple of quarters and finishing at Santa Cruz. This was the late 1960s and early ’70s, the heyday of the protests against the war in Vietnam. Though different in temperament, both places roiled with political passions. Each was magical to me. UCLA was a big-city school, but it felt like an intellectual oasis during the days I walked its verdant campus. It was also alive with rallies where people with bullhorns exhorted the crowds and volunteers counseled scared young men facing the draft. In the midst of this antiwar fervor, feminism was beginning to erupt along with racial anger. Angela Davis, an avowed Communist and a vocal sympathizer with the Black Panthers, was an acting assistant professor in the philosophy department. Fired by then-governor Ronald Reagan in 1969, she was reinstated after she sued the Board of Regents. Great waves of moral energy sloshed this way and that. In the thick of this tension, I felt like a raw nerve. So much stimuli, so many ideas. I was also getting a first-rate education. I would sit in my bell-bottom jeans and army surplus peacoat in some huge, chilly lecture hall and be dazzled by a professor’s elegant disquisition on Thomas Paine or André Gide and then stumble out into the bright, agitated day—all for about $150 a quarter.

On a visit to friends up the coast, I was smitten with UC Santa Cruz and decided to transfer. I wanted to leave my hometown, though not the UC system. I knew in my bones it was the state’s ultimate gift and bargain and anchor. Santa Cruz was the new wild child offspring, a bookish summer camp in the redwoods. There were no grades, no exams. I attended seminars on the lawn with a number of splendid thinkers—a sun-splashed Monterey Bay shimmering in the distance—and way ahead of the cultural curve, dined in the cafeteria on organic veggies grown by students in a campus garden. There was foment, antiwar solidarity strikes, and adamant chatter about the need for diversity, but because of the school’s nature and location, the decibel level was decidedly lower than at, say, Berkeley. The place suited me. I paid—I remember writing the check—$342 a quarter for tuition, room, and board. Even then that amount seemed to be astonishingly low. In spring 1971, I graduated with highest honors in politics (what the school called political science). A photograph from that day shows me standing barefoot in a meadow, wearing a thigh-high white dress with big green anemones on it, blond hair streaming almost to my waist, a brainy flower child.

Like many of us who were in school in those days, I have been struck by—and sometimes troubled by and critical of—the long period of campus quiescence that followed. The collegiate atmosphere has felt tame and goal oriented, marked by students with their heads down working toward their degrees so they can get to Wall Street or into grad school. The release of choice has been binge drinking rather than protesting. Now they’re back at it, the young people of California. Or are they?

I contacted a female student who had befriended me. A thoughtful aspiring writer and UCLA senior, Natasha Hakimi provided me a sharp reality check. She said she knew maybe one person who had participated in the demonstrations and that only a couple of hundred had actually been involved. That’s all. Yes, she said, students are upset about the tuition jump but feel powerless to do anything about it.

“My generation is very apathetic,” she told me. “But a lot of that comes from a feeling of futility. We don’t have any hope of really changing anything. So it seems pointless to be out there. There is no sense of community, no sense of belonging, no support groups. It’s ‘If I protest, who has my back?’?”

Hakimi’s mother is Mexican and her father Persian; she attended high school in Woodland Hills. She’s enrolled at UCLA on a full scholarship—proud of it and grateful, too.

“Many of our parents are immigrants,” she said. “That’s especially true here in L.A. And they bought into the American dream. They want us to have everything. In some ways we are spoiled. We grew up in this little bubble. During the protests, some students asked their instructors if they could leave class to join in and still receive participation credit. Absolutely not, they were told. So they stayed put. We’re just afraid of rocking the boat.”

The next day I went to UCLA and found it quiet, almost serene—and very clean-cut: females in flip-flops and shorts, males with close-cropped hair. Cheerful-looking women from the gymnastics team, in tiny blue outfits and ponytails, were turning cartwheels, hoping to entice passersby to come to an upcoming meet. Almost everyone was on a cell phone or texting or listening to an iPod. One is conscious of the ubiquitousness of our gadgets in any public setting, but at that moment I was struck anew by how completely technology has defined this connected disconnected generation. For all the talk about the Web putting people in touch—as was noted myriad times during the recent Iranian demonstrations—what’s obvious is that it divides people. Each student seemed to be walking around in his or her own technobubble, inured to any call to arms, should one even be sounded.

There was another divisive factor, something Hakimi had talked about and that became apparent as I roamed the campus. The allegiance of most students, she said, was to their own group—Mexican American or Southeast Asian or Iranian—not to the whole, another reason why bringing together a cohesive protest movement was complicated and unlikely. Indeed, on the path to Royce Hall there were some freestanding placards, but none mentioned the recent tuition-hike imbroglio. Instead they posted invitations to join the CSA—Chinese Student Association—or the Latin American Student Association. Others advertised groups like Students for Justice in Palestine or Grace on Campus (Christian, I assumed). In short, students were being offered an enclave that was tailored to their beliefs or origins. Hakimi said that’s where her activist friends tend to put their energies, helping orient or tutor others from their own ethnic background.

I thought about her as I strolled and saw faces like hers, purposeful and hopeful, and chatted with other students. Despite the tough economic times, they more or less manifested a certain pragmatic optimism, a feeling that, yes, it would be hard to get a toehold in the world but not impossible. There was no cynicism, no rancor. The more I thought about it, the more appreciative I was of that lack of animus, because if we baby boomers, in our insistent if somewhat tattered nostalgia, can be churlish about the apathy of these so-called millennials, then they have every right to be disappointed in us and our profligate stewardship of their world and their university. We had, many of us, surrendered to the good life—or certainly tried to carve out a nice chunk of it—and had failed to join the fray and support the few legislators who were working to protect the state’s resources. California’s higher education system should have been at the top of the list. Instead the ideologues and opportunists had helped send the state into financial free fall, exaggerating the ever-widening gap between rich and poor. California’s priorities had gotten screwed up, and a lot of us had succumbed to the same resignation expressed by these students: Can’t do anything about the mess, so might as well do your own thing.

When I reflect on my college years, what I remember most is precisely the opposite—that everything seemed possible. My voice and vote and presence at one demonstration or another mattered. You could not go from class to class uninspired. There was a collective vigor of being lit up, engaged—not just with the issues of the day but with big ideas about justice and democracy and fairness, precisely what I was studying in my poli-sci classes. Of course, the money part was so different. Many of these students are graduating with huge debts and justifiable nervousness about what lies ahead. They have a tremulous eye on the future. They also have no faith in government; they think it is broken, beyond repair. Despite our cynicism back when, we were still in the fight to change leadership, still maintained the belief that such a shift could and would matter. That gave moxie and meaning to those years.

I have always been thankful for my UC education, thankful, too, to have been young when I was.