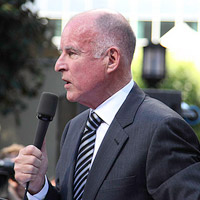 Governor Jerry Brown today released a revised budget plan that reveals the state has received an unexpected $6.6 billion in revenue. The surge, which goes some way towards reducing California’s deficit, most recently estimated at $15 billion, will be spent on education. The news should be of some relief to California teachers, thousands of which rallied on Friday to protest cuts in education spending. The budget also shows the governor’s plan to eliminate 43 boards and commissions. You can read the budget here.