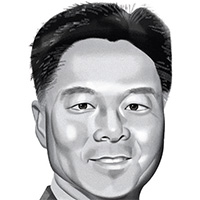 The South Bay Democrat, who represents District 28 (an area that includes Torrance, West L.A., Beverly Hills, and West Hollywood), recently announced his run to replace 40-year veteran Representative Henry Waxman. “I was surprised Waxman chose to retire. Running was a difficult decision I made very quickly.” He’s no household name, but he did rack up 25 political endorsements, including one from congresswoman Maxine Waters, within 24 hours. “[Former House Speaker] Tip O’Neill’s adage was that all politics is local. I’ve represented the district for years and worked with these elected officials. They know my leadership.” His top issue? “Climate change. It’s the biggest threat facing California and our nation.” Come the primary election on June 3, he’ll have to beat rival Wendy Greuel or find a new career. “If I don’t win, I’ll no longer be in the state senate. But politics has not been my entire life. I was in the air force. I’m willing to take the risk.”

Rep. Lieu Says He Struggled Not to Use “Swear Words” in Trump-Putin Statement