Home Urban Development Going Up: How Your view of Los Angeles is About to Change... 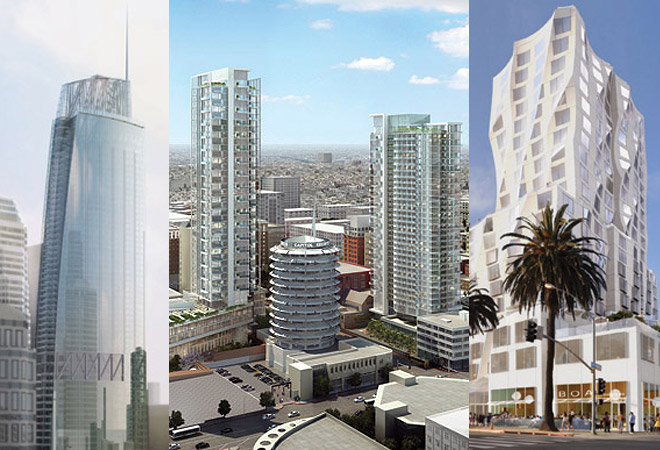 L.A. may boast a spectacular array of architecture, but we’ve never been much for skyscrapers. At 32 stories City Hall remained the tallest structure here until 611 Place was built downtown in 1969. That’s about to change drastically, with plans for several very high (and even higher-profile) buildings in the works. Local politicians, construction unions, and urban planners have largely supported these efforts. As developers eagerly find new ways to pack more real estate around now-walkable business districts, some residents are fighting for their space. They cite fears about earthquake safety, doomsday traffic, and—perhaps worst of all—lost sunlight. Like it or not, many of these projects are moving forward, so it’s time to get familiar with buildings in three neighborhoods that are destined to change L.A.

Skyline 1: Downtown
Since 1989, the 1,018-foot U.S. Bank Tower has been the tallest building west of the Mississippi. But no longer, thanks to the Wilshire Grand Tower, designed by AC Martin for the Korean shipping corporation Hanjin Group, which will be built on the site of the demolished Wilshire Grand Hotel. With its spire, the project will top out at a hulking 1,100 feet. There’s another way the Wilshire Grand will transform the skyline: The building has been exempted from a 1974 municipal code that requires emergency helipads atop all skyscrapers, so the peak will be a mohawk instead of a flat top.

Skyline 2: Hollywood
A hotly contested revision of the Hollywood Community Plan will allow for more tall buildings in a district that’s seeing plenty of vertical growth. Three new projects will rise at least 22 stories (matching the Sunset Vine and House of Blues buildings): the under-construction Sunset Gordon project, Columbia Square’s tower planned for the old CBS Studios site, and a double-tower combo in the Hollywood Palladium parking lots. Meanwhile the Millennium Hollywood will feature residential towers of 39 and 35 stories each (reduced 25 percent from the original plans) near the Capitol Records building.

Skyline 3: Santa Monica
The formerly low-key community is now debating a Downtown Specific Plan that would make room for three hotels to soar above the modest vista. The Fairmont Miramar hotel hopes to add a 21-story tower as part of a renovation. Across the street from Santa Monica Place, a onetime Holiday Inn has been taken over by a Wyndham, which wants to add three towers, including one that reaches 15 stories. Finally, the ocean avenue project could exceed them all with a hotel-condo complex and a public rooftop deck. The 22-story undulating white facade is being designed by local resident Frank Gehry.