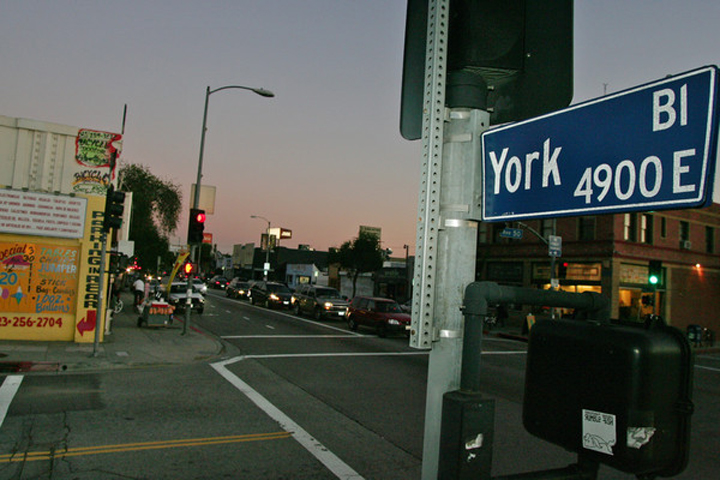 Early in the evening two Saturdays ago, as shopkeepers on Highland Park’s York Boulevard were preparing for the monthly NELA Art Gallery Walk, a group of protesters made their way down the street. They carried signs that read, “The Community Is Not for Sale” and “Check Your Privilege.” They played music, passed out flyers for a renter’s rights workshop, and—most noticeably—posted handwritten fake eviction notices on new businesses, including many restaurants.

York Boulevard is the epicenter—or at least the most visible display—of the quick, dramatic changes that the Northeast L.A. neighborhood has undergone in the past few years. These changes signal gentrification or revitalization, depending on whom you ask, and the inflammatory eviction notices, which charged the businesses with “neglecting the displacement of others,” proved to be an explosive symbol.

The Internet response was immediate and impassioned. Many who had witnessed the demonstration took to Twitter, voicing their support for the new restaurants and shops. Others sided with the protesters. A heated, emotional, and days-long argument played out in the comments section of neighborhood blog The Eastsider.

Calling it an artistic performance in part, the organization behind the protest, the North East Los Angeles Alliance, admits that their actions were designed to provoke.

“What the eviction did is took something that is usually invisible—the very private, humiliating process of being evicted—and it made it present in a very sensitive, image-conscious area. It sullied the view,” says a NELAA member who preferred not to be named. “The dialogue on gentrification as it stands on places like York and stretches of Figueroa is shut down, it’s locked up, and we wanted to open it up again through a provocative act,” he says.

And open it up they did. Many residents and business owners felt blindsided by the protests, which some characterized as “childish” and “misguided.” Restaurateur Andre Guerrero, who opened Maximiliano three years ago on York and has had his storefront defaced with anti-gentrification graffiti in the past, expressed anger and dismay.

“My family moved to Glassell Park over 50 years ago. In fact, when we moved here, we were the first Filipino family,” says Guerrero. “I guess the thing that I resent about people who want to protest my being here is that I was probably here before they were. And then they insinuate that somehow I’m a privileged white person with a sense of entitlement. I guess I do have a sense of entitlement because this is my neighborhood….I’m not some carpetbagger opportunist.”

Joram Young, a co-owner of Town Pizza, one of the strip’s newest businesses, echoes Guerrero. “All three owners at Town have been residents of North East Los Angeles for years,” he says. “We love Highland Park. There is nowhere else we would rather be.”

But business owners like Diep Tran of Good Girl Dinette, which is located just off of Figueroa Street, empathize with the protesters. “I think I understand the rage,” she says. “What happens to a community when it gets gentrified—you know, the actual community that was here and built that sense of vibrancy and the dynamism that makes it so attractive—do they get pushed out?”

She says she tries to do her best to fit into the neighborhood by hiring locally and providing fair wages. “Gentrification means somehow you’re out of step with the community that’s already there. If you open up a business that’s in step, you take into account the community and are mindful about who you are hiring—I mean, nobody should tell you who to hire, but if you’re getting tax breaks, you have to give back.”

Many business owners and residents argue that, by virtue of being small and independent, these new storefronts create a net gain, bringing greater public safety and infusing capital into the neighborhood. Some say the protesters are focusing on the wrong issues and, instead, should be targeting the area’s fast food establishments and check cashing stores, working to eliminate gangs, or trying to effect change through local government.

One 15-year resident, who wished to remain anonymous, put it this way: “If you’re going to rage against the machine, make sure you’re raging against the right machine.”

In response to these kinds of criticisms, NELAA says they do focus their energies on many prongs of the gentrification issue, including renter’s rights, the housing shortage, and council politics, but don’t deny that demonstrations like this one can create visibility and spur instant dialogue.

“If you’re really sincere about being in a neighborhood—like really present—you have to be open ears and open heart…you have to go in and listen,” says the NELAA member, who later added, “We talked to people [during the protest] who were angry and then stood and listened to us, and we got to listen to them.”

How the conversation evolves will surely play a role in shaping the future of this neighborhood in flux.