Home Uncategorized Going For Broke: Is Los Angeles Headed in the Same Direction as... 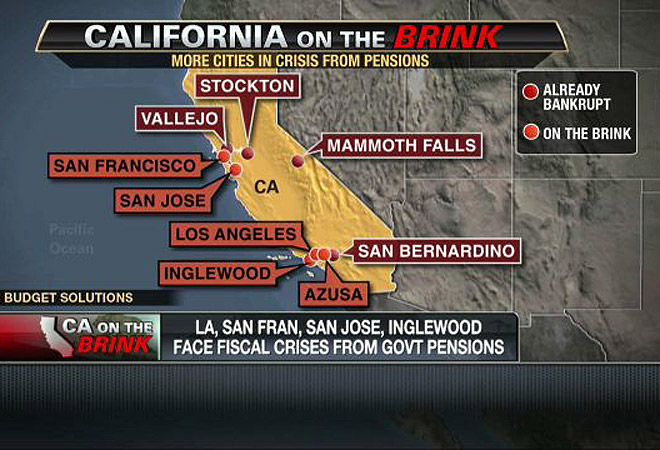 In an interview with HuffPost Live’s Jacob Soboroff on Tuesday, California Pension Reform President Dan Pellissier put forth the opinion that Los Angeles is dangerously close to filing for bankruptcy, all thanks to an out-of-hand pension crisis. “I think your city of Los Angeles is probably two to three years away from being in the same position that Detroit is where there is not enough money to pay the bills,” Pellissler told Soberoff. “[L.A.] can’t project, going forward, a stable budget because they face the same pension problems that everyone else in the country does.”

Pellissier’s declaration comes on the heels of Detroit’s historic municipal bankruptcy filing on July 18th, a last ditch effort to counteract a pension debt that had gone from bad to astronomical: of that city’s $18-20 billion tab, 54.3% ($9.5 billion) is attributed to pension and healthcare costs. And they’re not the only ones. Last week, Chicago’s credit rating was reduced as a result of $19 billion in underfunded pension liabilities.

By comparison, L.A.’s pension crisis seems marginally less paralyzing, though a true figure estimating the city’s debt conflicts across sources: According to a February 2012 review by the Stanford Institute for Economic Policy Research, 30,000 beneficiaries between the city’s three pension systems—the City of Los Angeles Fire and Police Pension System (LAFPPS), the Los Angeles City Employees’ Retirement System (LACERS), and the City of Los Angeles Water and Power Employees’ Retirement Plan (LAWPERP)—have accumulated a debt of $27 billion. Varying estimates of discount rates, however, have caused Los Angeles city officials to provide lower estimates. In a pension reform plan presented by City Administrative Officer Miguel Santana in September of last year, LACERS estimates only $6 billion in unfunded liability by the fiscal year 2016-17, $5 billion less than was calculated by SIEPR. In January of this year, The Pew Charitable Trusts determined L.A.’s unfunded liabilities to be only $4 billion.

Due to the variability in discount rate estimat

Jack Dean, Vice President of the California Foundation for Fiscal Responsibility, believes Los Angeles’ own pension woes can be attributed in part to pension benefits being enhanced beyond what the state of California is actually able to sustain. “In 1999, right around the time of the dot-com boom, California took what’s called a pension holiday because the state was well funded,” he says. “They stopped putting money away because so much was coming in. But anyone in investing will tell you, you need to continue putting money away in the good times because there are sure to be bad times.”

Dean also blames L.A.’s pension predicament on California’s overly magnanimous policies. “We’re too generous,” he says, “and therein lies the problem: After 9/11, many fire and policemen got their bump in the pension formula, taking them from a 2% pension plan to a 3% pension plan, which is a 50% increase. By not putting any money away to cover all of those 50% increases, [the government] automatically created an underfunded pension liability.”

While Pelissier and Dean think the path we’re on is parallel with Detroit’s, not all key players seem to think the Motor City’s implosion is related to L.A’s current economical climate. “The comparison to Detroit is completely off,” says Santana. “L.A. has made significant progress in addressing pension issues in the city, probably more so than any other jurisdiction around the country: We’ve increased the retirement age from 55-65; we’ve limited retiree healthcare benefits to just you as opposed to you and your partner; the [salary] contribution level, which was at 4%, has been increased to 11%, plus a whole series of other reforms.”

Will Los Angeles bankrupt in two to three years? “Absolutely not,” Santana says. “Detroit’s crisis is driven by the fact that they’re losing their population. L.A.’s population conitues to grow. Our economy is solid and getting stronger every year. Our housing market is one of the strongest in the state. We’re driven by a growing economy and a dropping unemployement rate; Detroit is seeing a decline in their popualation and exceedingly high unemployment rate.”

Should Pellessier’s predictions come to fruition, Los Angeles wouldn’t be the first California city to succumb to municipal bankruptcy. Just last year, both Stockton and San Bernadino were forced to seek a bailout in an effort to navigate their respective fiscal crises; similarly to Detroit, both cities owed the majority of their debt to a depleted pension fund. But Santana is fairly certain of a positive outcome for us. “The reforms we’ve already enacted are beginning to work, and they should lower [pension] costs by $4 billion in the coming years,” he says. “And while the rate still continues to grow, it’s growing more slowly than we projected a few years ago, which is progress.”

This post has been updated to clarify discrepencies between sources on Los Angeles’ pension debt.

Barneys Files for Bankruptcy, and Most of Its L.A. Stores Are Closing