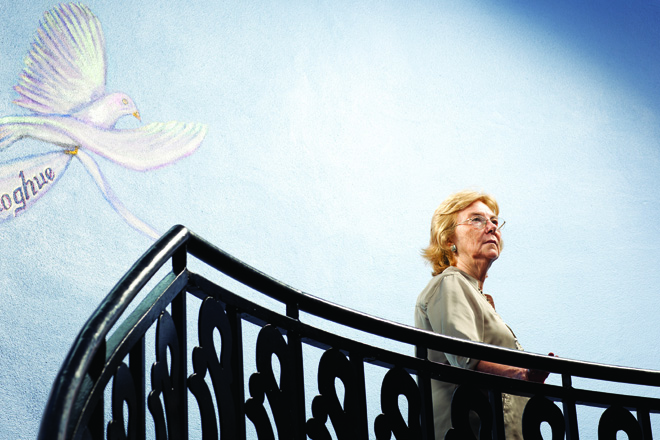 On a lovely winter morning Ana Deutsch and I sit in her bright, cheerful office in the Mercado La Paloma in South Los Angeles, talking about the topic that has consumed her life: political torture and violence, specifically how to help heal those who have been abused by those in power. By coincidence, the same day The New York Times carries a front-page story on one of this year’s Academy Award favorites, Kathryn Bigelow’s Zero Dark Thirty, about the tracking and killing of Osama bin Laden. The movie shows graphic scenes of the brutal interrogation tactics—including the much-discussed waterboarding—used by the CIA to try to elicit information from prisoners. Deutsch is troubled. She is not loud; she does not remonstrate. But one can hear the anger and the weariness in her voice. She has been at this a long time.

Deutsch is the clinical director and cofounder, with Dr. Jose Quiroga, of the Program for Torture Victims. Started in 1980, it was the first organization of its kind in the United States, an all-purpose nonprofit that provides medical and psychological help to survivors of torture. Deutsch came to this world through personal history. Born in Argentina, a country she misses and speaks of with longing, she fled to L.A. with her family during the so-called Dirty War of the late 1970s, when there was full-scale state-sanctioned violence. People were being locked up or maimed, or they “disappeared.” She was not tortured, but some of her relatives were, and those memories propelled her into her line of work. A psychoanalyst by training, she had to start over and obtain a counseling degree when she came here. One by one, clients who had been victims of violence sought out her program.

I met Deutsch more than a decade ago when I was doing an essay for PBS. With her dedication and warmth and quiet outrage, she became one of those people I’ve kept my eye on, a moral touchstone  who has changed my view of my city. That’s what I look for as a journalist and a citizen—corny as that might sound—someone who can expand my understanding of the world in which I live, this world, this L.A., this huge, strange sprawl of so many millions from so many places. I live here in my small bubble, and then I meet a person like Deutsch who bursts it. She laid out a hidden side to the city, introducing me to torture survivors from across the globe who have traveled here as she did, leaving behind families and countries and horrors. She tells me that Greater L.A. has been home to the largest number of torture survivors, asylum seekers, and refugees in the country for the last decade, and that makes me feel both sick on one level and proud on another. Yes—take them in and heal them. Find them a haven among us. Let us learn from their grit and grief. Let us listen to them, if they are willing to talk to us.

Some are and others aren’t, Deutsch tells me. She has seen hundreds, maybe a thousand, during her time at the PTV. She has lost count. A portion stay briefly, seeking help with getting asylum and that’s it. In a painful and perverse twist, torture often leaves the victim with a sense of shame, as if he or she were responsible for what happened. Certain clients just don’t want to revisit the trauma. But others stay on, continuing therapy even after they are back on their feet and functioning. I speak with one young Caribbean man who was brutalized in his country not because of his political leanings but because of his sexual orientation. Deutsch says the PTV is seeing a lot of that now—people thrown in jail and raped because they are gay. The man I talk to is brimming with charm. He is open with his story, which is a breathtaking catalog of atrocities. He now has a job, and his application for citizenship is proceeding through the system. He says the flashbacks are still awful, that he wakes terrified in the night. But, he says, he is strong. The hardest part was learning to trust someone again. He continues attending sessions at the PTV to exercise that trust, to practice being with people who want to help, not hurt, him.

He is, I know from Deutsch, unusual in his exuberance, though there is a hearty strain in all the people she sees. After all, they have made their way to this city and this program. Deutsch once took me to a gathering of a social support group called the Healing Club, which PTV runs. The group assembled in a small suburban house, each member arriving with food from his or her native land for an international potluck. First there were songs in a polyglot universal language, then stories. I remember a woman from Sierra Leone, beautiful in a flowing white dress and white turban, her lined face radiant with sadness. She was there with a grown daughter and son. He had been tortured back home, and another son had been killed. Her daughter translated as she haltingly picked her words. It was hard to look at her and hard to look away. Afterward everyone chatted and ate—even laughed. I was astonished at the easy humor, people figuring out how to communicate in their heavily accented English.

Deutsch says that what knocks her out is the incredible resilience of her clients. She recounts how they live in the sparest circumstances so they can send money home. Close to half of the project’s current clients are from Africa—as many as 40 percent of the 100 or so people Deutsch and her colleagues see in a given year. It is a continent in constant turmoil. Over the years there have been survivors from everywhere: in the 1970s and ’80s, refugees from Central and South America, then later from the Middle East and Asia.

How ironic—if that is not too gentle a word, and it probably is—that torture is currently a major issue in the country to which so many of these victims have fled. Since 9/11, we have been engaged in a national soul search about the topic. The Senate Intelligence Committee recently completed a 6,000-page report on the subject—which is, alas, still classified. What’s clear is that the United States has in the past decade inflicted physical and psychological pain on people to gather information. At the same time torture has become a kind of ugly, titillating staple of our entertainment, on TV shows like 24 and Homeland. There is a suggestion that in the tougher, meaner world in which we now live, nothing is—or should be—off-limits. There has also been a spirited and angry backlash, especially to Zero Dark Thirty, with politicians from Dianne Feinstein to John McCain insisting there is no proof that torture played a part in generating the information that led to Osama bin Laden.

Deutsch simply says: This is a country where the rule of law is sacred. We should prosecute people in a court of law, not torture them. She does not breathe fire. That is not her style. I see during our visit a sadness I did not register earlier. She has lived with an ongoing account of evil, hearing it and breathing it and trying to counter it in a concerted, daily manner, one person at a time. Yet she says she has become comfortable in Los Angeles. She has a grown son and daughter and grandchildren, and they bring her joy. She returned to Argentina three times last year to see family and work on a project with former political prisoners. She lights up when talking about the current criminal trials of the generals from long ago, those who perpetrated the terror during the dictatorship of 1976 to 1983. She says she visited the courtroom just to watch the reckoning of one of those responsible for the torture, an aging, well-fed man in a uniform.

There will be more survivors, more people finding their way to Ana Deutsch’s office at the Mercado. They will live among us with their disturbing stories and incredible courage, in Little Ethiopia and Koreatown and the Valley and South L.A. They will tuck in and put down roots and become part of the fabric of the city, reminding us, if they’re willing to share their stories, of the cost of torture.