Home Politics Why Do Officials Who Worked with George Gascón in S.F. Appear to... 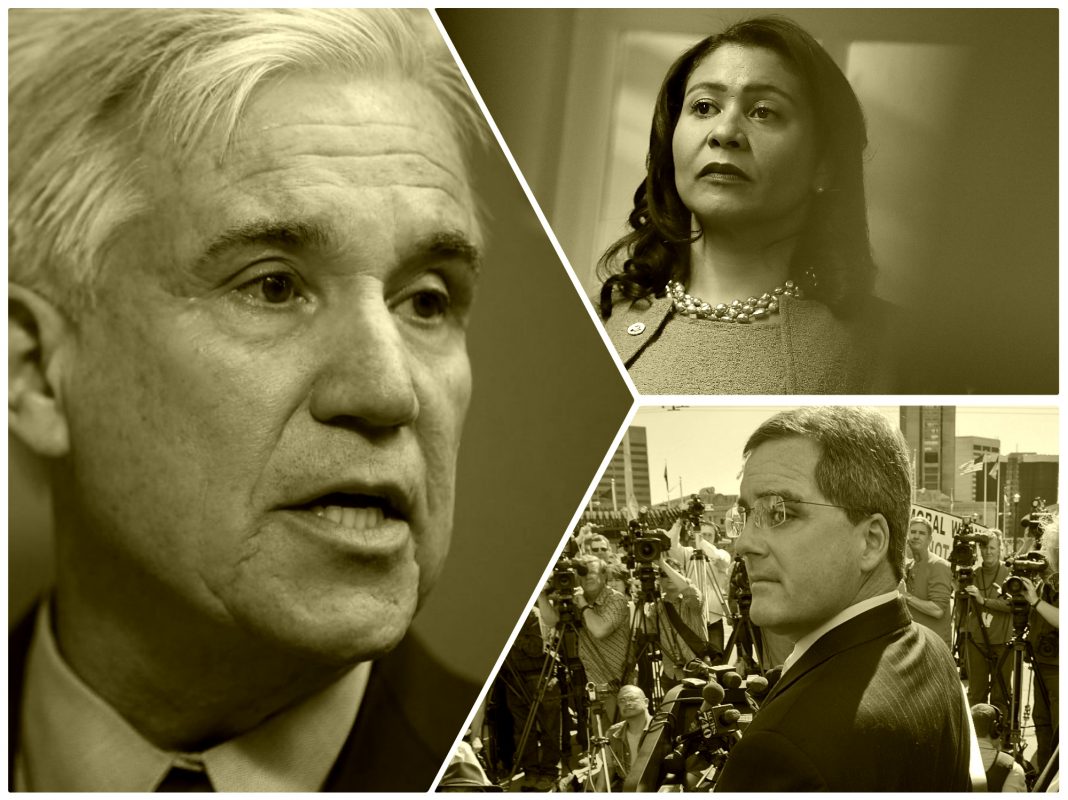 The race for Los Angeles County District Attorney is quickly shaping up as a convoluted Tale of Two Cities.

On Thursday, San Francisco Mayor London Breed and longtime City Attorney Dennis Herrera announced they are both endorsing L.A. County D.A. Jackie Lacey for reelection. What makes this more than a typical endorsement is that Lacey’s main challenger is  former San Francisco District Attorney George Gascón. The head-turning public endorsement of Lacey is an unmistakable snub to Gascón, who only resigned as the Bay Area burg’s top prosecutor on October 19.

It is but the latest turn in the competitive race to lead the nation’s largest and busiest prosecutor’s office. The former chief of the LAPD, Charlie Beck, announced he was backing Gascón over Lacey on October 28. Beck was a co-worker of Gascón’s when Gascón was an LAPD assistant chief under Bill Bratton. He praised Gascón for championing reform, saying it showed “a commitment to doing the right thing, even when it comes at great personal cost.”

Behind the divided loyalties of high-ranking city leaders lies the debate over criminal justice reform in California’s two leading metropolises.

Breed and Herrera, who has been S.F.’s city attorney since 2001, praised Lacey in a way that seemed like a tacit critique of Gascón’s tenure in the Bay Area. Breed said that Lacey “effectively navigated the delicate balance between keeping our communities safe and enacting meaningful reform,” as quoted in the Los Angeles Times. Herrera said Lacey “knows how to balance reforming the system while ensuring that violent criminals are off the street and neighborhoods are kept safe.”

During his tenure as San Francisco’s top prosecutor, which began in 2011, Gascón has positioned himself prominently on the side of reform. He has expunged minor marijuana convictions, experimented with technology to address racial bias among prosecutors, and supported a state law that mandates the state Department of Justice clear records of convictions involving probation and jail once an offender’s sentence was completed.

Most notably, Gascón co-authored the state ballot measure Prop. 47, which reduced punishments for certain nonviolent crimes. That measure has come under some scrutiny in San Francisco amid a rash of car break-ins and street-level drug crimes plaguing the city. When Breed named an interim prosecutor to fill Gascón’s seat, she singled out for criticism what she called “the endless cycle of people getting arrested for dealing drugs, or breaking into cars, only to be released back out on the streets.”

Gascón’s campaign is blaming the police for the city’s recent wave of street crime. The campaign told the Times that police made arrests in less than 1.6 percent of reported vehicle break-ins; Gascón prosecuted about 85 percent of the auto theft cases presented to his office, they said. As for drug-dealing cases, San Francisco prosecutors filed charges against more than 80 percent of the nearly 750 cases presented by police in 2018, the Times reports.

The Gascón campaign alleges that personal animus may have played a part in Breed’s decision to snub the candidate. The San Francisco Chronicle revealed in a report earlier this month that the mayor had asked Gascón to review the conviction of her brother who is serving a 44-year sentence for manslaughter. Gascón’s office complied with the request, but ultimately decided not to reopen the case.

Jamarah Hayner, a spokeswoman for Gascón’s campaign, told the Times that, after the office declined to reopen the mayor’s brother’s case, the relationship with Breed “went downhill.” However, Breed told the Chronicle she does not recall phoning Gascón about her brother’s case, and denied ever asking for or receiving any special treatment on the matter from the district attorney’s office “or anywhere else.”