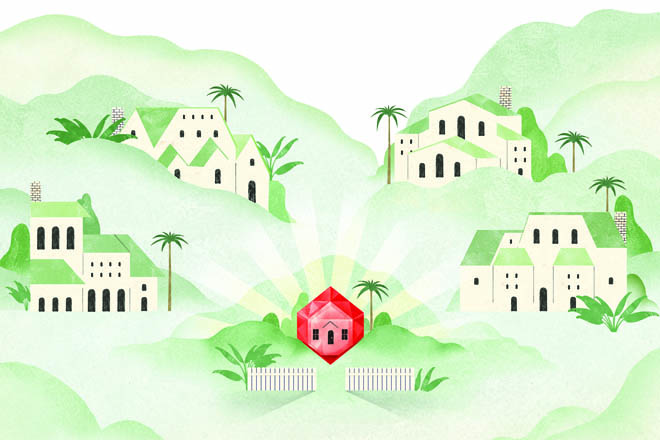 Starter house: That’s what people—including family members and friends—said when they looked at the small cottage my husband and I were buying in the 1970s. The implication was that we would move on at a future point, or rather move up, to something larger, certainly if we added a child or two. We smiled as we listened to them. Both of us knew that we were in it for good. One reason was pure brute love. We were crazy about the place. It fit our image of ourselves, of how we wanted to live, in a lovely little clapboard box that reminded my husband of his Southern roots and me of a bygone American era. The bungalow said “home.” We knew we would not leave. There was a big old peppertree out back, where we hung a swing, and a prolific lemon tree in front. Plus we were within a mile of the ocean. Our Brentwood neighborhood was modest then. People weren’t yet knocking down structures like ours and putting up buildings that went from lot line to lot line. We were nesting in an unostentatious suburb where the sea breezes blew and couples like us could settle down.

The other reason for staying was financial. We were fortunate enough to get into the housing market at a good time, though even then we had to borrow cash from my mom. When it came her turn to buy a half mile away, my husband and I were then in the position to give her a few bucks. What we understood early on is that we were never going to make much money. We were both writers, not of the Hollywood variety but of the old-fashioned reporter kind. I was a freelancer, hawking my wares to magazines and newspapers here and in New York. My husband had steady journalistic gigs at Newsweek and CBS News before he joined me in the world of the self-employed, ultimately starting his own media training business. We lived paycheck to erratic paycheck—and we were comfortable with that, though there were terrifying periods, I admit. At our lowest moment, when my husband was having health problems and my career hadn’t really taken off, we would raid the piggy bank to buy groceries. We were profligate at times and then had to dig our way out of a pile of bills. But we became more conscientious and careful as we went along.

I had been trained in this roller-coaster life. My parents were actors, and they had long stretches between jobs. When they were working, the money could be good—not huge but solid. There were days, however, when my mom would sit on the front stoop waiting for the mailman to bring, she hoped, a residuals check. I was weaned on those rhythms—you have it, you don’t have it—acclimated at a young age to the notion of choices. My parents wanted to do creative work; well, then, it came at a cost. You paid in financial insecurity. That was the trade-off. So too for my mate and me. We learned how to manage what we had and heighten those few pleasures.

There would be no costly renovations or additions—no granite countertops or Viking ranges, no walk-in closets. We did not have kids of our own, but when one or the other of my stepsons lived with us, we tucked in together, lining up for the lone bathroom. We never put in a second one. We warned our many houseguests that if they had a digestive emergency, they would just have to sing out so the current occupant of the facility could yield the premises. Those were the house rules. If anyone grimaced at the indelicacies of the situation, my husband would show them a photograph of the “shotgun shack” where he was raised in the swampy North Carolina countryside. “The outhouse was over there,” he’d say with a smile. In short, we made a game out of our circumstances without being apologetic. We thought our lives were rich to the max. And they were. We had a glorious if modest roof overhead. We had those lemons and before all the farmers’ markets came into being, our own vegetable garden, which my husband tended in his overalls and straw hat. Food was our main hobby, and as we practiced it, not an expensive one. We loved to cook and serve big meals—sides of pork and greens and cobblers, nothing that broke the bank. I remember best when the onions came up, sweet and pungent, and we would make sandwiches of them on thick slices of heavily buttered homemade bread. We learned to put together splendid meals for guests: meat loaf and a terrific pinot noir (if you ate cheaply, you could purchase a great bottle of wine), chicken in tomatillo sauce with black beans and rice. I said it was a game, the way we navigated, the concessions we made to our means. But it was more: It was who we were. Trying to keep up with the fancy folks was not in our DNA.

I know many people in L.A. who live the same way. They don’t overreach or get into hock. They don’t have a zillion smart gadgets and toys and flat-screen TVs. From the outside our city can look like a place where people show off, where they attempt to out-stuff one another. There are plenty of ridiculous mansions and sleek, privileged-looking people. But I have always thought this a city where you don’t have to compete, where the quality of life can be high without all the trappings. There are so many bargain pursuits at hand: beaches and hiking trails (you don’t need that high-end gym membership) and terrific ethnic restaurants. There is no uniform; you can dress stylishly for not that much—buying from vintage places and thrift stores. This is truer now than it ever was. There were work settings when I needed more adult, Armani-like fare. I could not afford these clothes myself, but a wonderful friend/godmother bestowed on me a couple of designer pantsuits. On major interviews I wore them with glee and gratitude, but I felt a tinge foolish, a California girl in power garb. It was fun, but it wasn’t me.

One thing I never cared about was cars. Nor did my husband. We had no automobile vanity. All we were concerned about was getting to and from. We drove used vehicles that inevitably had a scratch or a ding, though we tried to keep them washed. Our favorite, which is still in the family, is a 1993 Subaru wagon now with 200,000 miles. I once drove it to a posh lunch where I spoke to a group of well-heeled women from Orange County. We shared a lovely meal and much mirth and book chatter. As we stood in the parking lot to collect our cars, the valet brought up one Mercedes and BMW after another. Then came my green putt-putt. I turned and smiled at the waiting group. “This is what you drive if you want to be a writer,” I said.

I don’t mean to sound smug. What I feel is lucky—beyond lucky, in fact. There was enough money for tennis rackets and trips and health insurance, crucial if you are a solo practitioner, to use a big word. Our cottage was key, of course. Having it allowed us enormous freedom. That and hanging in with each other. Divorce was never in play, and we both knew that. We had our battles and sorrows, but splitting up was not a possibility. We got that. We laughed about it, sometimes in the heat of a fierce verbal battle. One of us would say, “You can just forget it—I’m not going anywhere,” leaving the other to inevitably respond, “I’m not, either.”

We had watched friends come unglued and tussle over their goods, often having to dispossess themselves of their lovingly decorated abodes, places where they had been happy and where we had all spent ebullient evenings. Gone. We were both heavy nesters by disposition. For us, the thought of uprooting and moving out and losing—or halving—what we had both worked for was sobering. It was not going to happen. We were (mostly) happily stuck with each other in our “starter house” in West Los Angeles. Not a day has passed when I haven’t experienced a childlike delight at pulling up in front, walking through the rose arbor, and opening the door. Looking back, I am grateful we didn’t want more.