Home Landmarks A Tour of L.A.’s Gay Landmarks, From Studio One to the Woman’s... 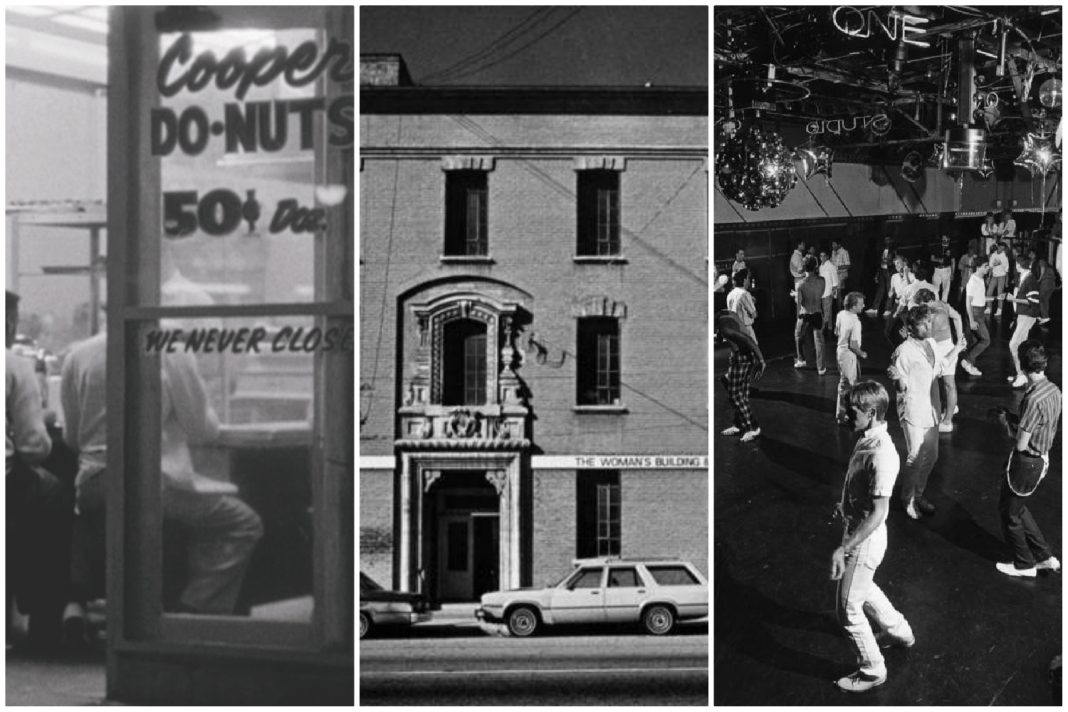 New York and Berlin get all the love from historians, but L.A. is where much of the modern LGBTQ movement began, including the first gay uprising, AIDS walk, and synagogue. “More lesbian and gay institutions started in Los Angeles than anywhere else on the planet,” write Lillian Faderman and Stuart Timmons in their book, Gay L.A.: A History of Sexual Outlaws, Power Politics, and Lipstick Lesbians.

Read enough about L.A.’s LGBTQ history and you’ll see the city in a new light. Griffith Park isn’t just for hikers; it’s also a place where gay men stood up against police violence. The fire station at Van Ness Avenue and Hollywood Boulevard was once a gas station where Hollywood icons met for clandestine affairs. And as far back as the 1920s, the mansions in the hills were home to some legendary queer bacchanals.

Here are a few of the notable landmarks of L.A.’s LGBTQ history.

In the 1970s and ’80s, this pioneering gay disco was widely recognized as the top dance club in L.A. It had a door policy that required black gay men to produce three pieces of ID—women were asked for five. Gay activists disparaged their Studio One brethren as “disco bunnies—blond, built, and brainless.” Not surprisingly the WeHo joint was always jam-packed.

Scotty Bowers, a former marine, arranged secret trysts between Hollywood stars and their same-sex admirers in a trailer at the back of this former gas station turned firehouse. In 2012 Bowers wrote Full Service, a best-selling memoir in which he recounts assignations with closeted stars like Spencer Tracy and Clark Gable.

Since Rev. Troy Perry founded the Metropolitan Community Church on Prospect Avenue in 1968, it has become the oldest continuously operated LGBTQ ministry in the world. Over the years the church survived an alleged arson attack and regularly received stacks of hate mail that the staff called “letters from Christians.”

Silver Lake was the birthplace of the Mattachine Society, one of the earliest LGBTQ organizations in the U.S. Founded in 1950 by Harry Hay, the group focused on building supportive social networks for its members while providing them with medical and legal services.

Projectile doughnuts probably weren’t what cops were expecting when they came to harass the queens, butch hustlers, and customers who patronized this downtown after-hours shop. The resulting riot helped launch the gay civil rights movement   in L.A. and forced Main Street to close for a full day.

Stars like Madonna, Janet Jackson, and the “Queen of Disco” Sylvester were among the
thousands who flocked to this pink stucco nightclub on Pico Boulevard—one of the first black discos in the country and a refuge for L.A.’s black LGBTQ community. Jesse Jackson’s 1988 speech here marked the first time a major presidential candidate addressed a black gay audience.

In 1998 George Michael was arrested for performing a “lewd act” in a toilet at this Beverly Hills park and roundly pilloried by the press. Refusing to be shamed, Michael wrote a song featuring tongue-in-cheek references to the incident and used it to come out to the world.

After a Stop at the Abbey, Kamala Harris Promises an LGBTQ Advocate in the White House