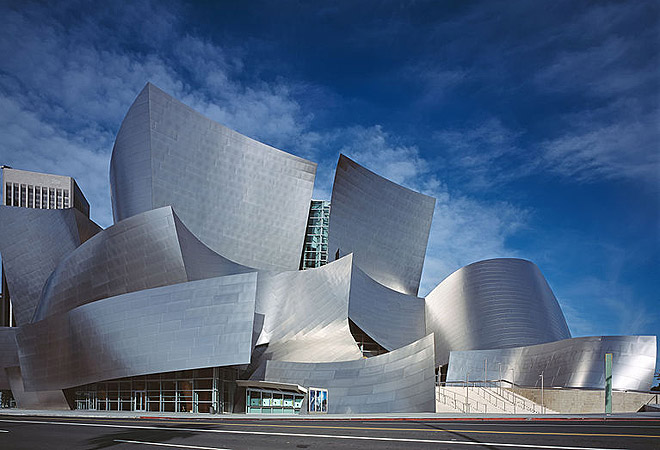 On Wednesday night, KCRW held a special live taping of Which Way, L.A.? in the Walt Disney Concert Hall to commemorate the iconic building’s tenth anniversary. A sizeable crowd gathered to hear Warren Olney and Frances Anderton banter with LA Phil president and CEO Deborah Borda, architect Frank Gehry, philanthropist Eli Broad, and Christopher Hawthorne of the Times—but not before the mayor himself could say a few words (and then surreptitiously sneak out).

“Disney Hall is nothing short of the greatest concert hall in the world,” Garcetti said in his welcome speech, drawing a wave of applause from the audience. “It has defined what ‘the good life’ means for this city.” In the decade since its completion, the structure has, in effect, become the face of Los Angeles. Here are five things we learned about it from this week’s KCRW panel:

It may not fit in, but it was meant to stand out:
When it was first completed, critics called Disney Hall “galactic,” among other things. But it was never meant to blend into the buildings surrounding it. “I knew this would be the most important building in the history of this city,” Broad said. “I’ve always said that Grand Avenue is the Champs-Elysees of L.A., and that Disney Hall would be what the Eiffel Tower is to Paris.”

Frank Gehry is a man of his word:
Olney tried getting Gehry to renege a statement he made in our August issue, one in which Gehry claimed that Wilshire Boulevard was the true heart of Los Angeles. But he stood by his own words, both about Wilshire and the concert hall: “I still think Disney Hall should’ve been built where the Geffen Playhouse is,” he told Olney.

Disney Hall plans to play nice with the Broad Museum:
According to Borda, the museum and the concert hall will likely become a power couple of the L.A. culture world. “Nothing can stand alone,” she said, referring to Disney Hall. “It needs synergy. When the Broad Museum is complete, we’ll have a museum and a musical institution collaborating on events, which has never been done before.”

The Grand Avenue Project is still on the table…
Disney Hall and The Broad Museum will be the crown jewels of the Grand Avenue Project—if it ever gets the green light. For now, though, Broad is planning on blowing out “Parcel Q” with shops, restaurants, and apartment complexes in an effort to continue the growth of the arts district. “It’ll be a huge tourist attraction,” he said.

…and Frank Gehry might be designing it!
While we can’t be sure who will be in charge of designing the Grand Avenue Project, there was quite a bit of chatter surrounding Gehry’s involvement. If that turns out to be the case, the project will likely have a flavor unique to the city. As Gehry put it: “We don’t need to be inspired by anybody. Let’s do our own thing.”