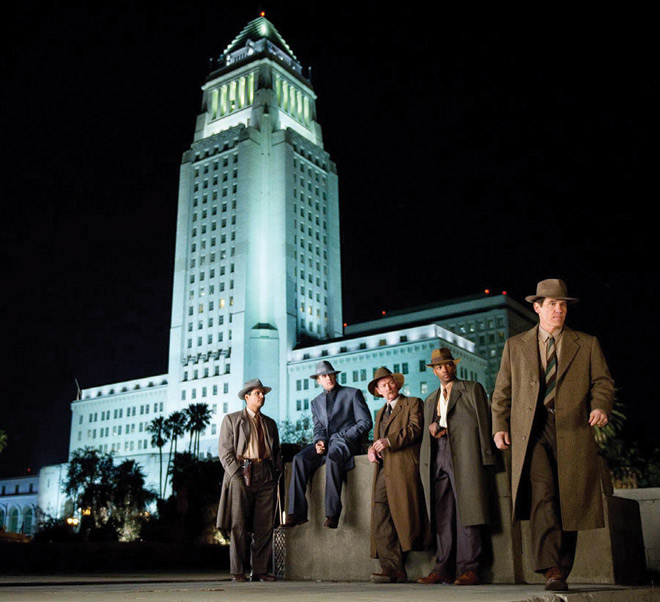 Lights, camera, and a change of action: The noir crime drama Gangster Squad was originally set for release last September, but after the horrific events in Aurora, Colorado, during the screening of The Dark Knight Rises in July, a grisly shoot-out sequence filmed inside Grauman’s Chinese Theatre (which was featured in Squad’s pre-Dark Knight trailer) seemed in bad taste. Warner Bros. decided to move the release date to January 11 and remove the scene altogether. In the revised version Grauman’s is out and Chinatown is in.

Crafting a whole new scene after a film wraps is no mere flip of a fedora. For a five-day shoot director Ruben Fleischer had to corral his all-star cast (which includes Ryan Gosling, Sean Penn, and Emma Stone), bring back all of the movie’s props, costumes, and cars, then transform the new locale—Gin Ling Way—to reflect 1940s-era Chinatown.

By day the bustling neighborhood was business as usual, but by night the production team went to work. Set designers restored the curled gables of the 1938 East Gin Ling gate (the real ones were damaged in an electrical fire in 2011) and masked contemporary storefronts with deco chinoiserie. They also resuscitated long-gone restaurants, such as Man Jen Low (opening as a club later this year) and Forbidden Palace (now the Via Café), recalling their original glory.

The painstaking do-over is but one backdrop of more than 50 local spots used in the film, from Clifton’s Cafeteria to the 6th Street Bridge. Lead production designer Maher Ahmad pored over 40,000 archival images to guarantee onscreen authenticity. Now it’s up to Gosling & Co. to nail the bad guys—and do L.A. justice.