Home Outdoors Biking How to Spend a Dozen Hours in Frogtown 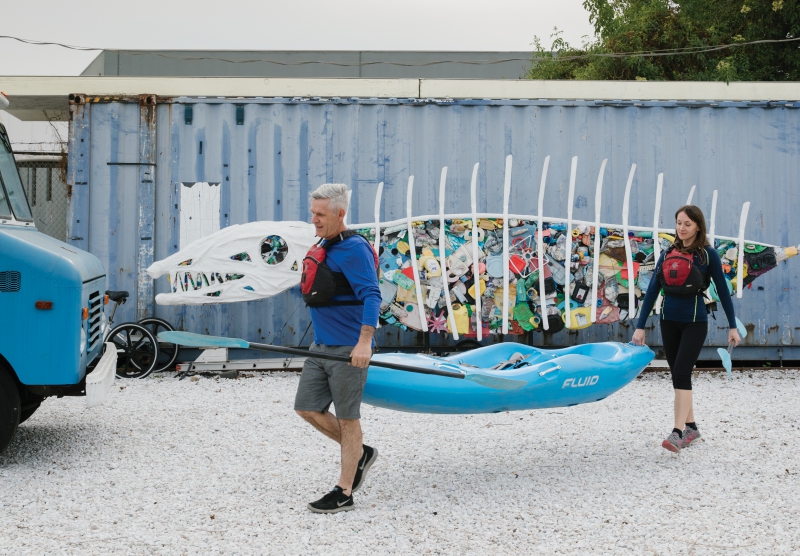 As manager of the Frog Spot, Friends of the L.A. River’s multipurpose community center, Johanna Hackett has seen Elysian Valley—nicknamed Frogtown after the amphibians that once thrived there—undergo big changes in recent years: New parks and businesses have cropped up all over the historically working-class area since it became the unofficial poster child for the city’s L.A. River Revitalization effort. Hackett tells us how to make the most of a trip to this riverside neighborhood. Start by bringing your bike

“There’s a statue of Lewis MacAdams, founder of FOLAR, and they’ve renamed the park after him—it used to be Marsh Park. The gates are beautiful; there’s lots of art. There’s parking, room for picnicking, and an exercise track with little machines.”

“Every sandwich is named after a public radio host: Terry Gross, Ira Glass. It’s built out of a recycled shipping container, and they have a different special every day that you can look up on Instagram.”

“They do a guided tour of the river. You don’t just kayak; you also get to bike the river path and learn about river wilderness, ecology, where the water comes from.”

“Laurie Winston and her staff are a really nice team of people who advocate for the river. They recently added a full menu and chef, and they have a bike-repair shop on site. Eat a cookie, and play some records or a board game.”

“Go shopping for punk rock memorabilia over at Nomad. They have a warehouse facility where you can screen-print T-shirts and buy used books. Bands play. They have had tarot readings. Like everything in Frogtown, it’s unique and eclectic.”

“You see people riding in on their bikes after work. You can buy a beer for someone, and they write it on a board. So for example, if I want to buy a beer for ‘Wonder Woman,’ the next person who walks in who either looks like Wonder Woman or has a Wonder Woman T-shirt gets a free beer. It’s super-fun.”

“They have tacos, burritos, carne asa- da fries, and the best guacamole. Every single time I’ve gone I’ve seen a recognizable star: Kim Gordon from Sonic Youth, Brad Pitt—who has a ceramics warehouse on the river— Jason Segel. The list goes on.”

“They always have weird, cool bands. They’ve got a patio, a great sound system, benches, and intimate tables.”

RELATED: The L.A. River Is So Lush, If You Know Where to Look