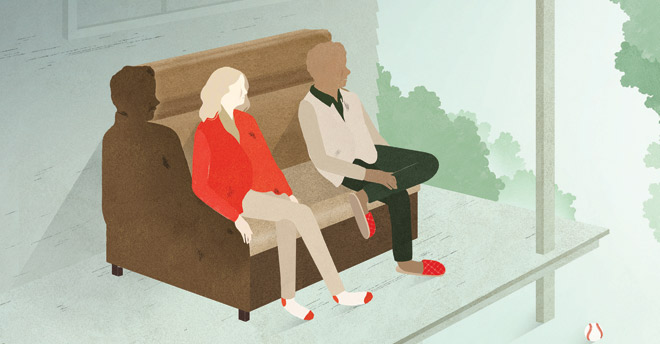 A year ago I wrote about a man who had come to live with us to look after my unwell husband. I talked of my trepidation at his arrival, my fear that the decades-long marital intimacies Karl and I shared—our chatter, our twosomeness—would get lost with a witness around. I also knew something else: By hiring a caregiver I was tacitly admitting that things had taken a turn and that my husband and I would never again be alone in our house without an extra voice or pair of hands. I had a twinge of failure, a sense that I should have been able to do this alone, the medications and doctors’ visits and midnight panics. I remonstrated with myself, but I had been on the case for close to four years and I was spent. Then Joey came, and the guilt and reservations lifted. A 36-year-old Belizean with a huge smile and an easy laugh, he slipped into our days with no edges, no attitude. Within 48 hours he had mastered all the prescriptions and the breathing equipment necessary to help treat Karl’s pulmonary disease and moved the furniture so it posed less of an obstacle.

He spent Monday through Friday with us and on the weekends went back to his apartment in South L.A. He returned with tales of his sisters and brothers-in-law, nieces and nephews, who resided nearby. I realized he lived as I did: in a close familial tribe in a section of this big city. We were both village people, having carved out our corners in this urban sprawl. In short, we placed the highest value on the same things: family and loyalty and kindness. When interviewing a prospective caregiver, you tend to ask matter-of-fact questions about hours and money and references and skills. Having just a perfectly competent, nice person in our midst—I suppose that would have been fine. But in retrospect I see that I was looking for more, someone truly simpatico to stay beside me as I did the toughest, saddest job I would ever do on this earth.

The passing days brought revelations. I would come home and the house would be spotless, the curtains pulled back, the windows shining. We had been living in a bit of a cave. Vases I hadn’t used in ages were filled with flowers from the garden—artful arrangements of leaves from the lemon tree and stalks of lavender. Karl felt safe. That was the best part. There was also the food. Joey turned out to be a first-rate cook; he said he thought it was part of a good caretaker’s arsenal. At dusk, after a walk to the beach, I would enter a warm, well-lighted place where pinto beans were boiling and a chicken was stewing. There were bananas to slice and caramelize for an ice cream topping. The dogs were walked and fed. I didn’t ask Joey to do these “extra” tasks. He let me know he enjoyed it, even though it wasn’t his house. I know he longed for one of his own, something elegant and lovely. At night, after Karl was asleep, we would page through the decor magazines or watch an HGTV show, and Joey would point out what he liked. Would he achieve his dream? We didn’t go there, just as we didn’t go beyond that night. You couldn’t, or you would crumble. If I succumbed to sorrow, he would leave me be—or occasionally, with his arm around me, tell me to “man up.”

Then it was over. Karl died in August, in the middle of a beautiful sunny day, all of us around him, his sons and their families, my sister and I. Joey stayed on to help me strike the set. The hospital bed was picked up, along with the oxygen tank. We threw out the pills, the asthma inhalers, the little tubes of albuterol—the life sustainers. Everything else we left for later: socks, shoes, clothes. I knew that combing through Karl’s personal effects would be in the future—maybe a month away, maybe a year or longer. There was no way to know when one could sort and touch and smell. I told Joey I would pay him for a month. It wasn’t right, I said, that he be instantly out of a job; we would take the time to find someone who deserved him. I put out the word among my friends. Most of them had already seen him in action and were in awe of his talents and disposition. Finally there was a serious employment possibility, a woman with an older husband. She wanted to interview Joey at the house. I set a time. Then I panicked. My stomach went mad. I realized I couldn’t do it. I couldn’t let him go. I wasn’t ready to be without him. I wasn’t ready to be alone.

I read about Americans who live by themselves, more and more of them, those who have never married or who are divorced or widowed. In 1950, 4 million people in this country lived alone. Now there are eight times as many—32 million. In Los Angeles more than 820,000 are by themselves. A number of my friends are solo, some happily, others grudgingly, mounting up for another run at online dating before settling into reasonable contentment. I have no practice at being alone. I went from my mother’s house to the one my husband and I bought when I was a young bride. I am a creature of domestic pleasures—and suburban Los Angeles rhythms. I live in my hood; I entertain at home. That had always been our way, my husband’s and mine. True, I spend the days writing in my small office, but then come the evenings and the talk and the meals and the news, the human noise. Joey had moved in and provided the ceremonial end-of-day rites when Karl was no longer able.

What I understood is that I couldn’t have everything end at once. That became clear as the postmortem month came to a close. I asked Joey to stay for the foreseeable future. I am not exactly sure what that means, except that we will be together for a stretch. Our days are odd, empty, pleasing. I write; Joey cleans and watches TV. We sometimes go out for lunch—Indian food or Thai—and stop at the market to buy something for dinner. I don’t need someone to cook for me as much as I need someone to cook for. Karl loved my food; Joey does, too. In my agony I brown and braise; I feed.

My husband adored the holidays, the big dinners, the presents. We were profligate gift givers, ebullient eaters. Obviously the merriment was muted in the last few years. I didn’t get a tree. I didn’t put a wreath on the door. But last December Joey kicked it up again. He wrapped a pine garland with a string of lights to decorate the mantel. He pushed me out into the malls. He made me try on shirts for my step-granddaughters and my niece and laughed when things were too tight or too large. He tried on shoes for “Mr. Karl,” lightweight loafers that were easy to slip on. We normalized. We pretended. It worked.

Now the season has come around again, and though everything has changed, Joey is still with me. We have been in the stores, mostly looking, sometimes buying. For the baby girls among his relatives we spot taffeta dresses with sparkles and bows and tiny velvet jackets that are soft and ridiculously cute. I am distracted for a bit, which is what he intends. We like the late afternoons, when the weather is crisp and the sun is setting. We set forth, paw through the racks, and have an early dinner of pizza or pad thai. There are moments when I shake my head: This is not my life. But then I remember: Yes, it is, and I sit hard on the memories that would make it impossible to move down the sidewalk.

Am I being cowardly? Sure. I assume I shall, down the road, be stronger—but not the same, never that. Joey will make his way. In the meantime I am indulging in what I see as a luxury that’s also a kind act. I am able to keep him on for a while, and I have encouraged him to use this strange interlude to go to school and earn a certified nursing degree or something that will help him move ahead. For now I don’t have to enter an empty house or eat alone. We sit some nights on the outdoor sofa, in our pajamas and jackets, throwing the ball for the dogs. We chat about family, his and mine, the various players known to both of us, and chuckle at their idiosyncrasies and our own, and I feel, despite the ragged sorrow, lucky.