Home L.A. History After Decades on York, This Printer of Religious Tracts Is Shutting Down... 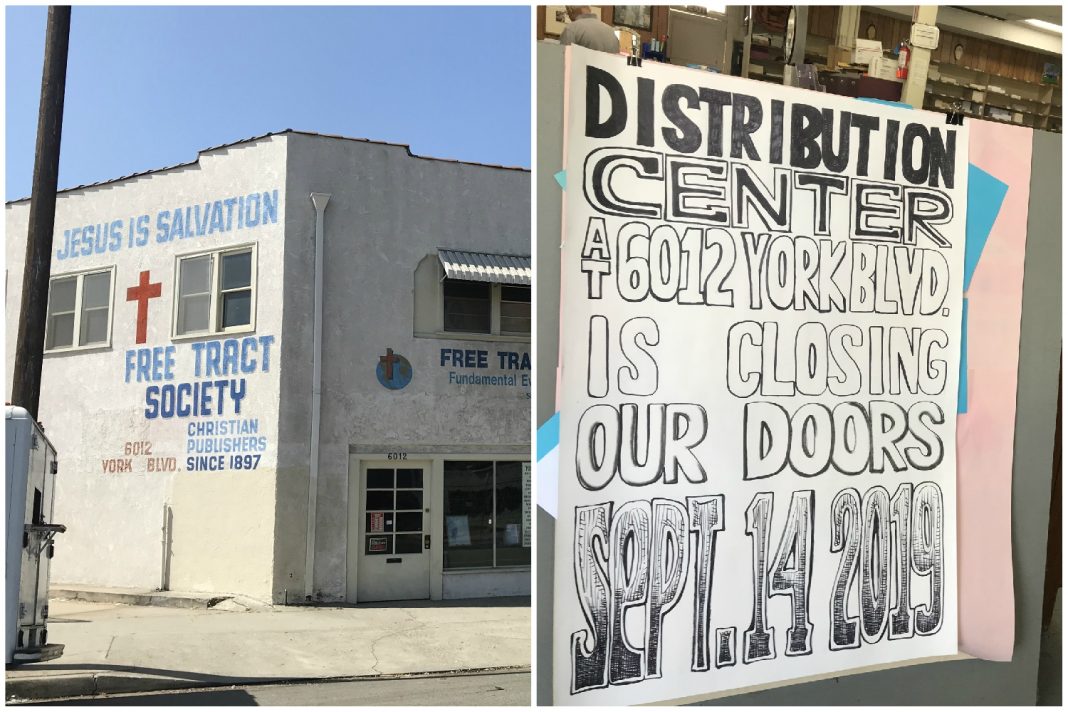 Stephen Smalley, all glasses and white walrus mustache, is shuffling around the Free Tract Society on a quiet morning instructing a volunteer how to prepare a shipment of religious literature that was churned out on a smelly, loud machine. The process has been repeated for more than 120 years, but that machine will go quiet when the operation closes for good on September 14.

William M. Bowen, who started printing tracts for soldiers and sailors during the Spanish American War, founded the organization in 1897 in Salt Lake City. He moved to Los Angeles three years later and built a shop on San Pedro Street downtown. In 1917, he moved to 746 Crocker Street where he died in 1936. His son Roy moved the operation to Eagle Rock, where it lasted until 1962. Brother Ernest Soady took over and moved to MacArthur Park, where he stayed for a little over two decades before relocating to a spacious former upholstery shop on York Boulevard in Highland Park. That’s where Smalley stepped in.

“I didn’t even know what a tract was when I came here,” he says. “I had no clue because I was a commercial printer.” Smalley specialized in small runs of operations manuals for the aerospace industry. “Air Research, Hughes Aircraft…” he rattles off some of the long-gone titans of industry. “That was a big deal in California.” Smalley met Soady through mutual friends and found his new calling. “My dad wasn’t religious. He was in the army. In 1960 he moved us straight to Hollywood and I started at Hollywood High School. We stayed in a motel with bedbugs near Hollywood and Western. When you’re 14 you don’t care.”

In addition to becoming a printer like his mother, Smalley credits the welding and electrical skills he learned in his secular life with keeping the creaky building—and creaky offset press—going this long. It’s not just that print media is a harder sell these days (please subscribe to Los Angeles magazine) but it’s likely that Smalley is a better printer than salesman. “We’re practically broke,” he says. “I wasn’t paying attention. I just pulled money out of savings and we used it all up.”

His predecessor was a little more savvy in his marketing, showing off images of needy children to potential donors. “Brother Soady had an orphanage in Honduras,” he says. “So he could talk about orphans and show the screaming kids, then he would throw in a free tract.” He inks up another plate and runs off some sheets in Spanish, keeping his one-man operation afloat another day. “The ministry owns this building,” he says. “We’re going to try to sell it.” Located just a few doors from the new yoga parlors and vegan sausage joints along York Boulevard, I’m sure he won’t have a difficult time. With the new funds, he hopes to spring up again someplace new and continue preaching by proxy.

RELATED: Highland Park-Born Forever 21 May Be on the Verge of Bankruptcy