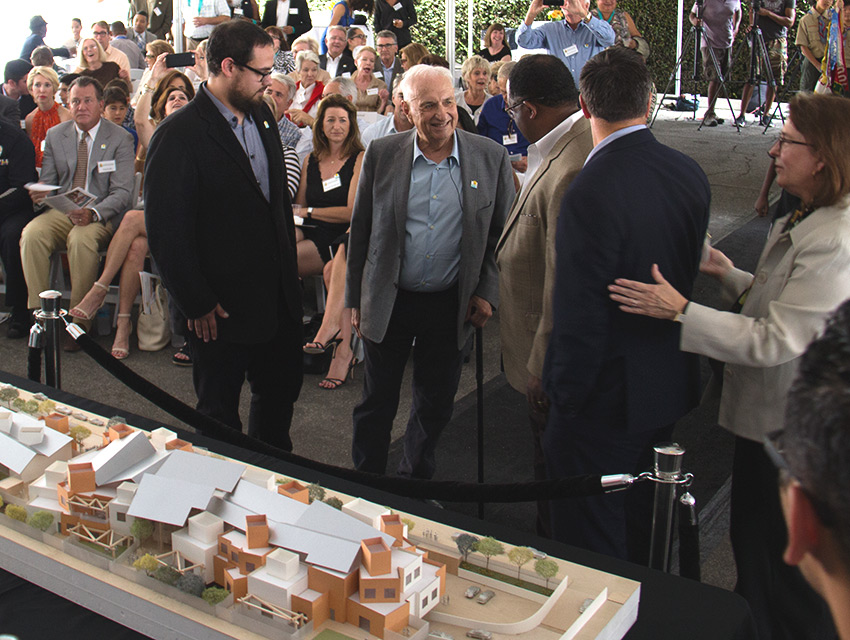 On a muggy Saturday afternoon in Watts last week, Frank Gehry unveiled his firm’s pro bono design for a new campus for Children’s Institute Inc., an organization that serves more than 24,000 kids and families who have experienced the threat of violence in challenged Los Angeles neighborhoods.

Nina Revoyr, CII’s Chief Operating Officer, oversees the institute’s visioning when it comes to facilities development. Just how did she swing a free Gehry design for a project for the middle of Watts? “Gehry is personally friends with one of our board members, Gelila Assefa Puck—Wolfgang Puck’s wife,” Revoyr says, “and she was the one who talked him into doing it.”

At the unveiling, though, Gehry—fresh from a hangout with some of the neighborhood kids and aglow with enthusiasm—defended his own interest in the project. “Gelila, you didn’t have to work that hard to get me to do this,” he chirped.

The building, a modest cluster of off-kilter cubes topped delicately with angular metallic roofs, was designed under Gehry’s guidance by architects Sam Gehry, his son, and Precious Aiyeloja. It will cost around $35 million to build—about half of which has already been raised—and will feature art rooms, a computer lab, kid-friendly therapy rooms, and community meeting spaces. The parking lot will be hidden away under the building to make the campus more approachable from the sidewalk.

“Our intent was to make a building that fits into the community, that’s not pompous, that’s not above itself,” Gehry said. “The scale of the building and the body language is kind of residential, so it fits in. It won’t stand out. I mean, I know it’s going to stand out—I can’t help it! I’m trying to make it fit.”

In an area where many of the surrounding buildings are poorly built, the Gehry-designed campus, Revoyr hopes, will serve as a source of community pride.

“There are so many things in the environment in Watts that give children the message that they’re not valued,” she says. “To have a building like this lets the community know that it’s important, valued, and respected. What we’re doing is really part of a much larger change in Watts.”

See the model for the new Children’s Institute campus and many other Gehry projects in the spectacular new Frank Gehry retrospective at LACMA.