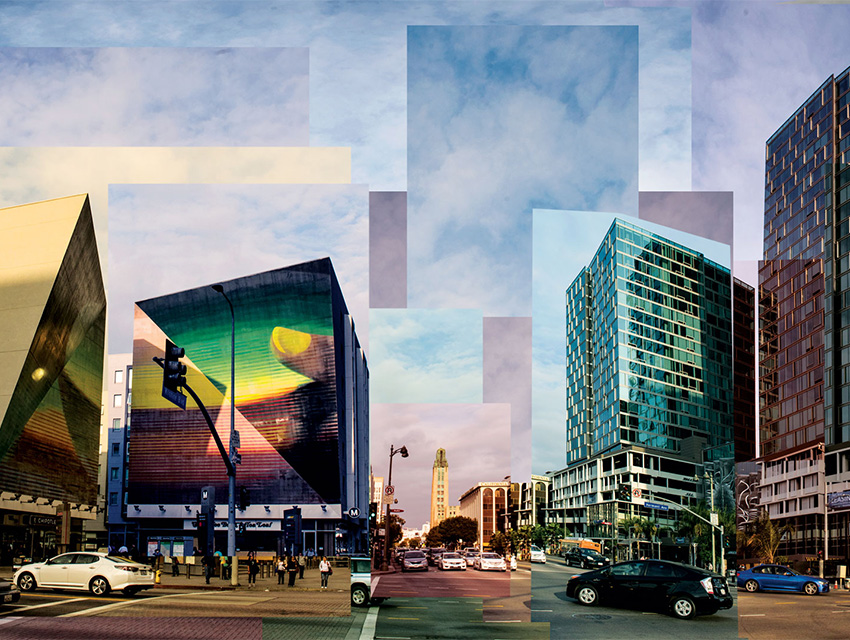 No one said change is easy, and Los Angeles is experiencing growing pains as it enters a new era. To ease the issues that crop up with more development and people, civic leaders are thinking creatively about public space, water use, building design, and real estate. Here, four problems and proposed solutions to address them.

The challenge: How to create more public space
When the Olmsted brothers, sons of Central Park architect Frederick Law Olmsted, designed the Mayberry-esque Leimert Park in the 1920s, polka dots probably weren’t much on their minds. But nearly a century later they cover the pavement of a new pedestrian plaza between the art deco Vision Theatre and the compact park that serves as Crenshaw’s unofficial village green. Eventually there’ll be seating and an urban garden—all of it on a street that was closed to drivers for this very purpose.

The plaza is part of the L.A. Department of Transportation’s People St initiative, which is also helping to install parklets, bicycle corrals, and exercise equipment in former parking spaces from South Park to Pacoima. “The idea is not so much taking something away from one group and giving it to another,” LADOT general manager Seleta Reynolds says. “It’s creating a balanced, organized street that actually looks like the way people want to use it.” The most visible example to date is the three-year-old polka-dot plaza that occupies a snippet of Griffith Park Boulevard in Silver Lake, but more are in the offing. The city provides between $50,000 and $100,000 for surface treatment, planters, and signage; businesses buy the furniture, and locals have to do the upkeep. “For people to take care of something,” says Reynolds, “they need to love it, and for them to love it, it needs to be beautiful.” – Neal Broverman

The challenge: How to make a more beautiful city
With so much construction in play, many L.A. architects and designers think city hall needs a design czar to provide developers with an overarching vision. The closest we have to that is chief deputy city engineer Deborah Weintraub. She’s the highest-ranking architect in the Bureau of Engineering, which collaborates with various departments to create public structures. “Our history is about being very practical,” she admits. “Now we’re moving beyond practical.” Case in point: In addition to commissioning surprisingly fetching new libraries, police stations, and parks, her department is overseeing the futuristic replacement for the 6th Street Viaduct, one of the L.A. River’s most beloved crossings. For buildings that aren’t funded by the city, Simon Pastucha is working to offer what cohesion he can. As director of the Department of City Planning’s Urban Design Studio, he led the creation of citywide design principles—sort of an aesthetic cheat sheet for developers and architects hoping to win planning approval. Not that you’ll hear Pastucha say what constitutes beauty amid so much varied territory. “I prefer to think about how you make a better city,” he says. “If everyone starts thinking about how you get a better city, then you’ll see a drastically better and more beautiful place.” – Sam Lubell

The challenge: How to keep L.A.’s limited water resources from evaporating
The city is adding faucets while facing a smaller water supply, but Mark Gold is optimistic. The acting director at UCLA’s Institute of Environment and Sustainability, he points to the region’s dramatic reductions of indoor water use through more efficient plumbing and appliances. Since half of L.A.’s water budget goes to outdoor irrigation, switching to more climate-appropriate gardens and low-flow irrigators will be key, too. And although Gold has no qualms about recycling toilet water, he notes other less squirm-inducing steps that can be taken first. “I think we could be putting in so much more storm water and high-quality recycled water into our groundwater basins, using them as giant storage reservoirs, if you will,” he says. Of course many underground aquifers are contaminated, and cleanup costs money. So along with changes to building codes, expect more talk of funding measures, elevated water rates, and bigger fines. One approach Gold likes is “net zero water,” which would require new construction to use 25 percent less water than what was on the site before. If that cap can’t be met, the developer would need to provide the means to save twice as much water at an off-site location. – Matthew Segal

The challenge: How to keep real estate affordable
Plans to revitalize 11 miles of the L.A. River have roiled Elysian Valley, a modest neighborhood made up mostly of Asians and Latinos, with a contingent of artists. Wedged between the 5 freeway and the river, the warehouse-filled area, aka Frogtown, has seen one-third of its 80 riverfront properties change hands over the past 24 months as developers and investors buy in. Home costs have increased almost 50 percent, with rents spiking, too. “A lot of artists feel that all we’ve done is tee up the area…for all the speculation,” says Kevin Mulcahy, an architect who’s worked there for ten years. With tensions over gentrification high, police have become a fixture at neighborhood council meetings. “The subject became more about people’s perceptions of class and race than identifying shared objectives,” says former council president Steven Appleton. He’s hopeful about changes sought by city councilman Mitch O’Farrell to promote affordable housing and adaptive reuse while limiting building heights and the bundling of lots. “We can’t control the market,” says O’Farrell, “but we can enact policies that will encourage the kind of development that will preserve our neighborhoods.” – Sam Lubell