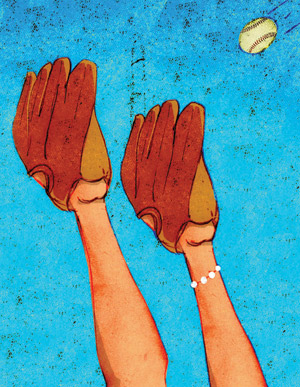 Even my non-baseball-watching friends were at least momentarily amused and riveted by the hoopla surrounding the separation of Dodger owners Frank and Jamie McCourt. We are used to splashy divorces in this hub of celebrities, to the media nibbling for months on the demise of star marriages like that of Brad Pitt and Jennifer Aniston. Who did what? Who said what? Who was sneaking around with whom? But the McCourt battle is in a wholly different league. Yes, there are—and will be more—titillating details; we already know she is in a romance with her chauffeur or bodyguard or security man or whatever he is. But this is bigger. The division of spoils includes not just their stuff but our stuff: our team. This marital rift has other dimensions, civic reverberations, unlike any other split I can remember. This divorce is not just fodder for gossip shows and blogs; it is page one news. Beyond feasting on the gossip, the town is wondering what will happen to the boys in blue, whom the two are gearing up to spend millions fighting over. Fueling that concern—or underneath it—is a long-simmering resentment the city has had toward the McCourts since they arrived five years ago.

There is something predictable and not altogether sympathetic about this dapper, acquisitive power couple from Boston coming unglued in paradise. They have had difficulty striking the right tone from the start. There was a defensive swagger about them when they appeared on the scene in 2004, a misread of a diffuse, multi-ethnic metropolis that loves its Dodgers. The McCourts hit L.A. straight on, beaming from local magazine covers that first year: We’re here, we’re rich, and we aim to fix your team (this after a failed attempt to buy the Boston Red Sox). Veteran Dodger personnel were let go or quit; favorite players left.

In short, there wasn’t much finesse about the McCourts. Another high-profile Easterner, William Bratton, also got off to a rocky start, but within months he’d charmed the rich and famous and the street cops alike, ultimately transforming one of the country’s most troubled police forces. A natural communicator, Bratton worked the media with a bluntness that earned their respect instead of their rancor, something the McCourts weren’t able to do. He seduced the city by becoming part of it; they managed to grate on it. Bratton also didn’t have a fraction of the reported $1.2 billion net worth of the McCourts, who bought four multimillion-dollar properties, two in Holmby Hills and two in Malibu, even as they raised ticket, parking, and concession prices for the games—historically patronized by blue-collar families who could ill afford the increases.

Not much embarrasses me about my hometown. Years ago I learned to live with—and not apologize for—its excesses. Something in the sunshine and beauty and bounty of Los Angeles has always encouraged people to indulge, especially those who move here from other states. They go native or what they imagine to be native. I remember in the 1960s and ’70s watching the newcomers bravely shed their clothes, hop into backyard hot tubs, and ogle one another’s spouses while everyone smoked dope. Those were the years of Hef and his bunnies and his infamous grotto, when the appetites were primarily libidinal (two of the McCourt houses are across the street from the Playboy Mansion). In recent times the hunger was more about goodies. Who had the largest home or art collection or fleet of cars? I own, therefore I am, became the new mantra. Everything got big and bigger: TVs, floral arrangements, kitchen islands. The capper was to acquire a team. It was the apotheosis of ownership, the ultimate accoutrement—beyond the real estate and the Picassos—that had something to do with being the puppet master of real live athletes.

Obviously both McCourts think so. He says she signed away her ownership rights in 2004 in exchange for their real estate holdings. She admits signing such an agreement because it reduced her financial risk (the Dodgers have been bleeding red), but with the understanding the two would be co-owners. This will be the nub of the fight—whether he emerges as king of the hill or whether community property comes into play and they share the throne. The lawyers’ bills will be staggering. Equally staggering is the list of demands in Jamie’s divorce filing. She’s asked for her job back as Dodger CEO while seeking $320,967 a month in spousal support if she’s reinstated, and $487,634—close to $17,000 a day—if she isn’t. She’s totting up business dinners five nights a week and business lunches five days a week; fresh flowers daily in the office; unlimited hair, makeup, and travel expenses for Dodger events; and five-star hotel accommodations. In a city rife with ostentation, this list cannot help but make one cringe.

In fairness to Jamie, she had to itemize her expenses for the divorce proceedings, no matter how egregious they appeared on paper. She was required to lay bare the opulent lifestyle to which she and her husband are accustomed. I don’t in any way want to single out the woman in this drama, which happens all too often. Women are in the unenviable position of petitioning to get their fair share in a divorce settlement, and seeming like fortune hunters in the bargain. We don’t know what fineries Frank McCourt is used to, what transgressions he is guilty of, though, if the nastiness of the divorce continues, no doubt we will find out. Jamie’s lawyer, the notoriously tough Bert Fields, has signaled a willingness to unmask Frank should he not accede to his about-to-be-ex-wife’s requests.

The truth is, it’s hard to root for either. One wants them both to go away so that we don’t have to witness their public display of bitterness. How any of this is affecting the team is unclear. The McCourts’ stewardship of the Dodgers did bring them back into World Series contention, and you have to give credit for that—and for the hiring of Joe Torre. But even in this capacity they are a mixed bag, refusing, serious baseball watchers say, to shell out the bucks to get the great pitchers (whom the team sorely missed during the play-offs). Meanwhile they’re paying Manny Ramirez $45 million for two years, and they showed scant moral distress when he drew a 50-game drug-use suspension. That was embarrassing, too. Other players have used steroids and lived to swing another bat. But in Ramirez’s flippancy and initial refusal to apologize, there were echoes of the voices at the top.

All of this said, I think Frank and Jamie McCourt are taking the rap for us, for a city that tolerates its own wildly divergent economic classes—not just now but in previous years—and I include myself in this willful tolerance that has sometimes turned a blind eye to the inequities and arrogance extant here. The McCourts, in effect, have held up a mirror to Los Angeles in which we see a face we don’t necessarily like. It is the face of the conqueror, the acquirer, the “dreamers,” as we euphemistically call them, who come to buy and dominate their piece of the landscape. The McCourts have done it with a little less grace and a little more overtly than others.

The unraveling of a multidecade marriage, however sad or sordid or expensive its end, is inevitably painful, bringing with it stabs of memories, hurtful but also lovely. These two people have been married 30 years; they made it big together, a long climb. Only they know what went on, what they meant to each other. In the heat of the moment perhaps they cannot remember, looking at their relationship through the angriest of lenses. Alas, the ugly pictures the McCourts are busy drawing are the only ones the public will be treated to unless, by some miracle, they find a way to divvy up the goods. It’s not easy to imagine that happening. There is a Solomonic decision to be made in this case, because you can’t very well cut a team in half. So we’ll have box seats for what is shaping up to be a vicious game.