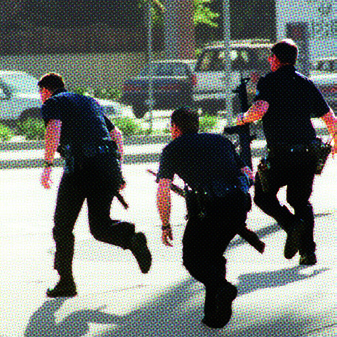 It is perhaps the city’s most haunting armed confrontation—a botched robbery at a bank on Laurel Canyon Boulevard on February 28, 1997. The number of fatalities (two perpetrators), injuries (11 officers, seven civilians), types of weapons (the robbers carried illegally modified automatic rifles and ammunition capable of penetrating metal), and rounds fired (nearly 2,000) make it one of the longest and bloodiest events in U.S. police history. Here’s how it went down:

9:17 a.m.
Nicknamed the “High Incident Bandits” because of earlier heists they’d pulled, Larry Phillips Jr. and Emil Matasareanu, dressed in full body armor, enter the bank. They are spotted by two officers, who report a possible 211 in progress. The duo open fire at the ceiling, then force their way into the vault.

9:25 a.m.
A watch that one of the robbers had sewn onto the back of his glove goes off (it was set on an eight-minute timer—the estimated average police response time). Arriving outside are patrol and detective units, along with a SWAT team that had been on an exercise run. The SWAT officers are wearing running shoes and shorts under their body armor.

9:32 a.m.
Phillips exits through the bank’s north doorway; Matasareanu, through the south. Officers demand they drop their weapons. The pair begin discharging their AKMs and HK-91 rifles, and a prolonged firefight follows, wounding 18. Matasareanu climbs into the getaway car in the bank’s parking lot. Phillips flees on foot.

9:52 a.m.
Phillips heads east, still firing. After one of his weapons jams, he is wounded in the hand and then shoots himself in the head in an apparent suicide attempt. Police hit him several more times; it’s unclear which of the bullets kills him.

10:01 a.m.
Matasareanu, who has abandoned his car after its tires are shot out, tries and fails to carjack a pickup truck. Police shoot him in the legs as he takes cover. He dies from excessive blood loss.