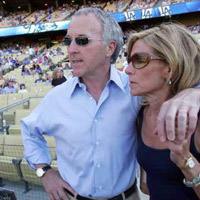 Even baseball novices know that the sport involves stealing home, not stealing money. For two people who owned a baseball team, you’d think Frank and Jamie McCourt would have been clear on that concept.

The former owners of the Los Angeles Dodgers have been in the limelight ever since their high profile divorce proceedings, which illuminated the egregious ways in which the team’s income was squandered under their stewardship (their spending habits—$74 million on four homes, $10,000 a month on a personal hairstylist—have been highly publicized). Now the feds are investigating possible tax evasion as well as potential financial misconduct, fueled primarily by the information that the couple didn’t pay federal or state taxes between 2004 and 2009. The Daily News broke the story of the investigation earlier today.  Click here to read a full report from the Los Angeles Times.