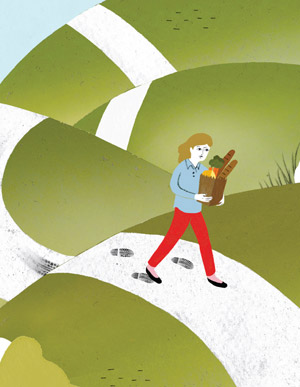 I wrote a column more than a year ago about trying to take the car away from my eightysomething mother. An actress turned real estate agent, she had spent many hours on the road—either commuting to some distant movie set or scouting the open houses in our Westside neighborhood. Sometimes I would pass my mother’s sedan parked on a nearby street and find her pounding a FOR SALE sign into a patch of grass, looking chic in lean trousers and a straw hat. I would honk and wave, and she would smile back. Often at midday I would hear her car stop outside, and I would leave my home office and whip up a nice little lunch: Brie omelettes or corn quesadillas with spring onions and fontina (I know, not the usual cheese, but our favorite; I always had the makings handy). I loved her unexpected drive-bys. A lot of daughters would have bristled at such interruptions. For me, for us, they were a kind of quotidian magic.

Then we started fighting for the first time in our lives—over the car. “If you take it away,” she said, standing beside her Subaru wagon, stroking the hood, “I will kill myself.” This was the kind of melodramatic remark that would have previously made us crack up. But she was serious. So was I. Her eyesight was getting worse, her reactions slower. When my niece came to visit, we borrowed my mom’s car, and I simply kept it. My mother was incensed. One day I came home to find it gone. She had found a spare key and persuaded her housekeeper to drive her to my house, where she stole the car back. I was livid with laughter. I had my husband drive me to her house, and thence ensued a screaming match. Finally she threw the keys at me and told me to go away. I felt sick to my stomach. There were ripples of discontent in the following months. I was aware that being without an automobile was hard on her (I was extra solicitous about picking her up and ferrying her places), but I had blocked how hard it was going to be on me: no more unexpected sightings or pop-in meals, no more accidental end-of-day encounters in the market parking lot. The amusing, anchoring serendipity of our shared lives was gone.

Then she fell and broke her hip. The car became old news, the symbol of an earlier battle. We were in a new one. She had surgery at Saint John’s Health Center in Santa Monica, where almost six decades before she had given birth to me, and in the wake of the pain medications and the anesthesia she took a long stroll in never-never land. She didn’t know who I was. There was that beautiful face, high cheekbones and big blue eyes—but no light of recognition in them. Admittedly she was a bit spacey going in, but coming out she was gone. Nobody could tell us whether she was coming back. This is no easy moment for an adult child. If you have lived practically every day within your mother’s eyesight, the blankness is a wipeout. I felt invisible, unhinged. She talked to people on the TV who seemed to be more real to her than I; she even seemed slightly coherent in her comments to them.

I did what I often do when confused or stricken: I took to the streets on foot. My long habit is to walk off heartache. I pound around, muttering to myself and the sky until the rhythms of the stride and the beginnings of fatigue start their calming work. My grumbles ease into prayers, importunings. My jaw untenses. After a bit I start hearing the ambient noise—birds and dogs and squealing children—rather than the cacophony in my head. I look up and realize I am a handful of miles from home. Look at these wonderful old bungalows. Look at this new deli. I take note of the season, the strength of the sunlight. I catch someone’s eye or elicit a smile, an easy nonintimate intimacy. No words needed, no words wanted, just a flicker of a hello.

After my mother fell, I started walking the 40 minutes from my house to the hospital and back. Later, when she was moved to a convalescent facility, I walked there. The travel time, the exercise, gave me a chance to prepare for what I would—or would not—find. Mama, is that you?  Are you in there? It’s me, Anne. The way home cleared my nostrils of the odors of old age and fear and industrial cleaners. Often I would detour to the bank or the market—I never set forth without an empty canvas bag over my shoulder. I found little snack joints I didn’t know, for a late breakfast or an afternoon treat. I became what I had never been in Los Angeles: a real pedestrian. I have been a walker and a hiker, but not someone who uses her legs for transportation. I started to live my life without my car. It became natural to put on my walking shoes when I got up so that I was prepared for the day.

It took me a while to realize that I was, by avoiding my automobile, showing a kind of solidarity with my mother, even offering penance for what I had done. I had taken away a major means of mobility; then, in short order, she had lost the more crucial use of another. She would certainly not drive again. Now it became clear she would not walk on her own, either. She struggled up and down the mock-cheery halls of her convalescent facility on a walker, the physical therapist holding tight to a belt around her middle, but it was too tough. My mother is small boned. The long days in bed had robbed her tiny legs of the muscles to support her in any substantial way. They had also robbed her of the willpower. But she knew me. The fog cleared after a few weeks—though not altogether (not then, not now). It continued to blow in and out, just like the mists coming off the ocean a half mile away. Even on her most confused days, when the sentences were gibberish with the occasional touchdown into lucidity, she didn’t let go of me again. I registered. I was back in her eyeballs. I was home.

We got her home in a wheelchair. She had a moment of vanity as we rolled her in; she didn’t want anyone to see her. She had her hair done and put on some lipstick for the arrival, but she hated not going in on her own steam. I could see the fiery pride as she looked to see if anyone was watching. Within days she had settled in as people came and went from her house, bringing laughter and food. My mother is lucky; she has something in this huge city that a lot of us don’t: a strong network of neighbors. I have always been envious of that. Like her, I have lived on the same street for almost 40 years, and while I have friendly people close by, they are not die-hard pals. My mom’s are, though, particularly the younger couple next door. They found her when she broke her hip outside her front door and called me and the ambulance. They raised a son there, a Berkeley sophomore now, a fabulous kid who, home from college this summer, has routinely appeared through the adjoining hedge with his bright face and male energy. He loves France, a place where my mom spent some of her early childhood, and they speak French together, a language that comes spilling out of her even as some basic English words prove elusive.

Song lyrics, too, are still readily accessible, as apparently they can be for people with memory loss who otherwise can’t remember the simplest things, though she sometimes has no accurate sense of where she is, in whose house or what city. I find it fascinating to watch her sit in her living room singing the show tunes she loves, often with the next-door family (they are all musical—another cause for envy, as I can’t hit a note). Sometimes she gets stuck on a line or two. For weeks she would sing “Why did I buy those blue pajamas before that big affair began?” She couldn’t remember the rest, nor could anyone else. I almost didn’t Google it because I loved that part by itself. We did find the whole song (“I Guess I’ll Have to Change My Plans,” for those who care; Sinatra, among others, sang it), and it is now part of the repertoire.

I see her almost every day. I have continued my practice of walking to visit. I can go directly or take a more circuitous route, a big loop, stopping at the market to pick up some groceries for dinner, which I prepare at her house. The neighbors often come over, bringing  other friends. We roll my mother, on sunny days, to our favorite breakfast café at the end of her street. I am amazed at the closeness of places I once drove to. What I have, fairly late in life, is a new and different connection to my city, along with, of course, a new and different relationship with my mother—even though there are many reminders of our old days and ways. She lights up when I come in or she calls (the caregiver dials and puts her on the phone) to tell me she is in Beverly Hills or New York and shouldn’t I meet up with her. “Be right there,” I say.