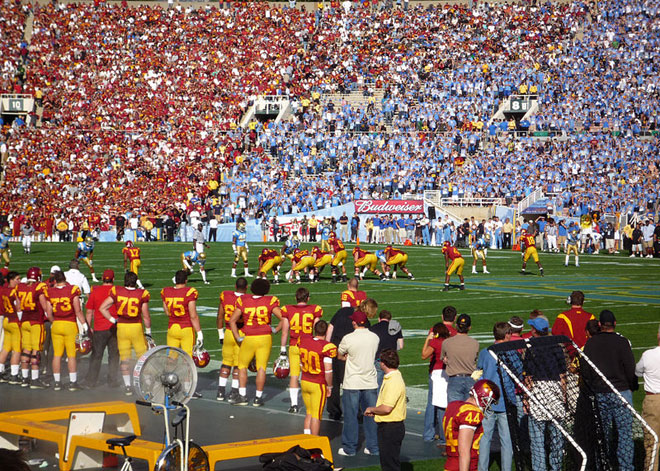 For the first time in recent memory, UCLA heads into a college football season with greater outside expectations than USC.

Just two years removed from the Trojans’ 50-0 drubbing of the white-clad Bruins at the L.A. Coliseum, a poll of media members who cover the conference predicted UCLA to finish first in the Pac-12 South division, two spots ahead USC, a team that experienced disappointment in the highest degree last season.

But, as we witnessed this past season on a rainy November afternoon in Pasadena, the Los Angeles football tides can turn in a hurry. The Trojans now cringe at being 2012-2013’s Sun Bowl runner-up, but with 2014 Heisman Trophy contender Marqise Lee still on their roster, a turnaround year could be in the making. UCLA enters fall 2013 with a better record at its back, but looking deeper, the Bruins have several vulnerabilities of their own.

With fall camp beginning in roughly a week for both schools, it appears the Bruins and the Trojans have some questions to answer

Can freshmen save a depleted defensive backfield?
After safety Tevin McDonald was booted from the team before spring practice and Dietrich Riley, another safety, was forced into medical retirement following continued neck and shoulder injuries, UCLA now returns with zero of four starters in the secondary from last season. Aside from a quality defensive back in the making in Randall Goforth, coach Jim Mora has been left with very few options and may need to start as many as three freshmen in the secondary.

Will the Bruins find an every-down back?
Don’t be surprised if UCLA’s coaching staff shows up in Green Bay with trench coats and boom boxes to try to woo back all-time leading rusher Johnathan Franklin. Replacing a legend is near impossible, especially when there’s no clear backup in place to fill his shoes. Incoming freshman Craig Lee, recently cleared by the NCAA for fall camp, may have the most talent of his fellow backs, but will be forced to earn every rep he gets in San Bernardino.

How will UCLA adapt on the road?
Last season, the Bruins only played one ranked team on the road. This year, they have the pleasure of facing Nebraska, Stanford and Oregon, all in their respective hostile environments. Throw in a Nov. 30 bout with USC at the Coliseum, and the Bruins may have bitten off more than they can chew, schedule-wise.

Who will line up behind center?
For four years, USC had the luxury of Matt Barkley running its offense. Today, a three-way quarterback battle is being waged between last year’s spot starter Max Wittek, fellow redshirt sophomore Cody Kessler and incoming freshman Max Browne. At Pac-12 football media day on Friday, coach Lane Kiffin said, “All three guys will have a shot.”

Is Nelson Agholor ready to be a steady No. 2?
USC has long had a proud lineage of wide receivers, and that legacy will certainly continue with junior Marqise Lee. Unfortunately for Lee, every Pac-12 defensive coordinator that values his team’s dignity will double-team the All-American, creating the need for a talented No. 2 at Lee’s side. Enter sophomore Nelson Agholor, who will need to improve on his 340 receiving yards from last year to keep USC’s pass game alive. No pressure, though.

Can McDonald and co. be replaced?
The Trojans lost a McDonald of their own, this one—T.J.—to the NFL Draft. Fellow safety Jawanza Starling and cornerback Nickell Robey also will no longer be wearing crimson and gold, meaning USC will have to rely heavily on a 2013 recruit class headlined by four-star safeties Su’a Cravens and Leon McQuay III in order to restock.