Home Uncategorized Foam Finger: Which Clippers Will We Get Today? 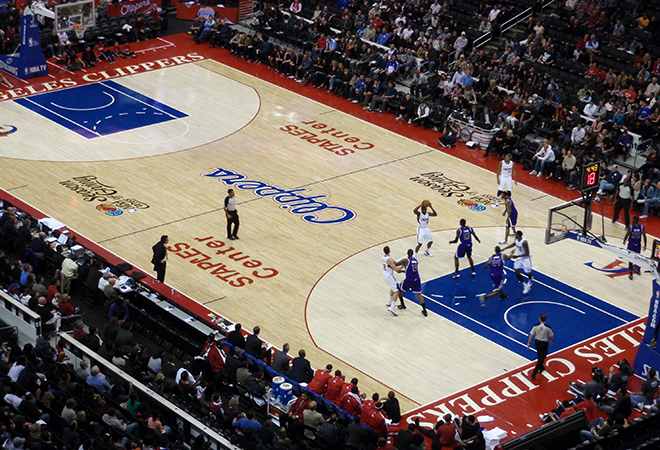 Give the Clippers team that took the court last Saturday some credit: They made a splash. It just wasn’t the right kind.

The Los Angeles Clippers were all tied up with the Golden State Warriors with 24 ticks left on the clock in game one of the Western Conference quarterfinals when a couple of untimely fouls left the Clippers with a loss in a game they should have won. But they were outshot and outrebounded by a scrappy Warriors crew, and for fans of the red and blue, it meant a collective sigh: Here we go again.

The biggest disappointment was Blake Griffin, the high-flying, rim-rattling superstar who had trouble moving his feet all game. With 48 seconds remaining, Griffin fouled the Warriors’ David Lee and was forced to watch the rest of the game from the sideline. He stood with his eyes locked on the Jumbotron and raised his arms in protest of a ticky-tacky foul, releasing the contents of his water cup all over an enthusiastic Warriors fan sitting in the first row.  Intentional or not, it was a sloppy end to a feeble, un-Griffin-like 16-point night.

If he and the Clippers were embarrassed after losing to what is widely considered a less talented team, it certainly showed two nights later, as the Clippers beat—no, shamed—the Warriors, riding a 26-point halftime lead to a 40-point victory. The Clippers made 91 percent of their free throws and nearly half their field goals, and mainly supported Griffin, who went off for 35 points.

When the Clippers head to Oakland to take on the Warriors tonight, they do so having carved two divergent paths. They can continue to assert their dominance and finally start to conquer some of their past playoff demons, or they can regress to their game one averageness and send Doc Rivers and Co. back to the drawing board after falling short in the first round yet again.

To continue their quest for the NBA title, they’ll need Griffin to be an active participant, not a spectator. If his minutes are limited by anything but rest (during a blowout), the team is in trouble. When he’s on the court, Griffin can’t be defended. When he’s on the bench, the Clippers’ lack of confidence is palpable.

On Saturday, Chris Paul had to shoulder a much larger burden in terms of offense, and he looked tired doing it, scoring 28 points but missing 13 of his 23 field goal attempts. On Monday, Paul was able to kick his legs up from the bench for longer stretches, playing just 27 minutes.

Resting Paul is a must for playoff longevity, but resting on Warriors star Stephen Curry is a nightmarish prospect. The guard is deadly from long range, and on Monday, the Clippers team that didn’t let up defensively was rewarded, allowing just one Curry three-pointer in seven attempts.

All of this, in addition to being able to adapt to a tough road environment in which they haven’t succeeded this season, will determine the Clippers’ fate today. In the first two games, it’s looked as though Griffin’s confidence was the inverse of Curry’s: When one thrives, the other is stymied. The Clippers just need to do Blake Griffin a favor, and keep all liquids at a distance.