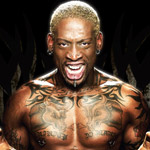 In case you missed it, one of the NBA’s biggest bad boys just had a meet-cute with one of the world’s biggest bad boys, Supreme Leader Kim Jong-un of North Korea. Punny headlines abound (Basketball Ace and Basketcase!) and media speculation about this historic relationship is running rampant. Why? The baller involved is none other than hall-of-famer Dennis Rodman. Rodman reportedly came into contact with the dictator during an exhibition ball game and post-game sushi party (complete with Imperial Palace lounging and background music set to the tune of Dallas—not really kidding). The odd trip is part of newsmag Vice Media’s basketball diplomacy efforts and will be featured as part of a new HBO series, Vice. (To be fair, ping-pong diplomacy warmed relations between the U.S. and China in the 1970s.)

Kim and Rodman are, apparently, off to a solid start. The game they co-presided over featured Stateside talent, including Bull Bullard and a handful of Harlem Globetrotters taking on some of North Korea’s finest—and tying. Yes, the teams tied. After the game Rodman told the North Korean leader “you have a friend for life,” and “extended an olive branch” to North Korea in what was described as a stirring speech. Now back in the states, Rodman told George Stephanopoulos this morning that Kim just wants Obama to, you know, call him sometime.

So what’s next for the new and eccentric friends? We looked at Rodman’s past to see what might be in store for the Hermit Kingdom’s fearless leader.

1. Co-authoring children’s books. Kids tend to tear up and get pretty emotional around their Supreme Leader, so we thought this might be a nice way to break the ice and strike up a more informal relationship. Perhaps Dennis can suggest a suitable cartoon animal persona for Kim—Wild Bull has already been taken.

2. A team appearance on “Celebrity Apprentice.” Nothing says, “I mean business” like being on TV with Donald Trump. Dennis and Kim would make an unstoppable team, a truly dynamic duo. (And we’re not just saying that because Kim is the leader of a mafia state, although that might give them somewhat of an advantage.)

3. A reality show inspired by the 1988 film Twins, or, similarly, something along the same vein as MTV’s hit Rob & Big. Kim needn’t worry about falling off skateboards or anything—with Dennis’ rebounding skills he’ll be in the best of hands. Also, what better security guard than Dennis Rodman? He was one of the NBA’s toughest (or most volatile) enforcers, and headbutt savvy as he is, he’d make Arnie and Big Black look like pansies.

4. Backyard wrestling. Forget basketball diplomacy; Dennis is quite the wrestler, and he’s got some formidable connections in the biz. Wrestling is also a great platform for making fashion statements, so Kim can say goodbye to that red scarf and say hello to some skin-tight glitterati red leggings.

5. After leggings, it’s straight to drag. How else to keep the world watching (without waging war)? Hit the mall and don’t worry about getting stuck there or wasting time, Kim. Dennis was renowned for his defensive hustle. He’s an efficient shopper, too.

Wherever this blossoming relationship is headed, we have one sincere warning for Kim: Don’t let Dennis break your heart! We hear he’s particularly difficult to get over.

Rodman is scheduled to give a press conference about his voyage in New York City on Monday, and highlights from the new emissary’s trip will be shown on Vice’s eponymous HBO show, slated to premiere April 5.