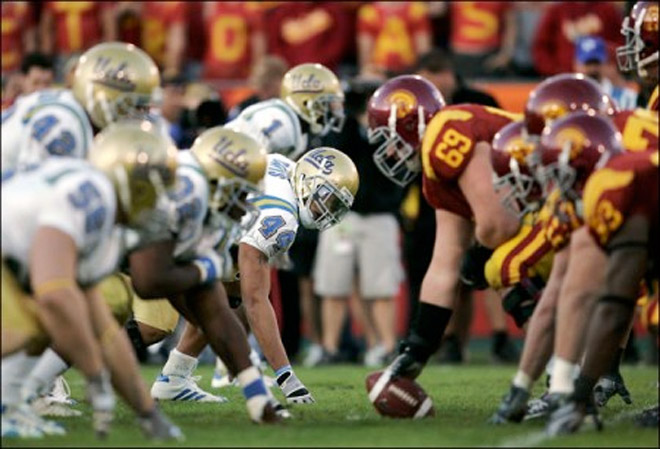 Have fun watching the BCS game last night? As the Golden Domers were getting embarrassed by Alabama, I couldn’t stop thinking about what the BCS game could’ve been. The Crimson Tide bullied their way to a 42-14 win, one that made you feel slightly remorseful for Notre Dame and the end of its magical, undefeated run. It also might’ve made you kick yourself because it marked the seventh consecutive time an SEC team took home the title. I had another feeling, too: regret. What happened to our local football programs this year? Weren’t the Trojans slated to be No. 1? And where did the Bruins go after their high-octane fall performances?

Some have said that Notre Dame didn’t deserve to be in the BCS game in the first place. But nobody can take anything away from the school’s undefeated regular season; maybe it wasn’t what people were expecting late August and early September, but the Irish earned their stay. USC receiver Marqise Lee put it—the frustration, mystery, and intrigue—best: “It’s been tough in the sense that we went from No. 1 to nothing and they went from nothing to No. 1. When you think about it, there were a lot of games we should have won.”

You can Google “USC football” and see all of the unfortunate headlines, so no, I won’t appease USC haters and natter on about how crappy the Trojans’ season was. By now everybody knows that. What is perhaps more interesting is what’s going to happen next with the Trojans and also with the Bruins, who had an underwhelming finish in December as well.

The State of Troy

Last time we checked, USC was going through some changes. Among the notable ones: no more Monte Kiffin (so no more “Tampa 2,” the Trojans’ so-called now-outdated, hole-filled defensive scheme), an NFL Draft-declared Robert Woods, and cries for a real offensive coordinator. After stumbling from its brief ascension to No. 1 and finishing the season 7-6, the Trojans went to the Sun Bowl where they played a miserable game against Georgia Tech, losing 21-7. Many this season have pointed to Lane Kiffin’s lack of emotion and ability on the coaching front, saying it doesn’t make any sense for him to be the offensive coordinator and the head coach simultaneously. Kiffin should be spending less time staring at his playsheet and paying more attention to his game management skills—this is not to mention his sometimes ludicrous playcalling, clearly exhibited in the Notre Dame game’s goal line stand. Looking ahead, young quarterback Max Wittek will need to become the trigger mechanism for whichever skill players remain on the team—most notably Lee, who, obviously, needs the ball in order to make plays down the stretch. Nobody is doubting Kiffin’s recruiting prowess; he has helped USC nab hopeful prospects through the sanctions, but it is still strongly suggested that a move be made to hire an offensive coordinator. It might also behoove the coach to give Cody Kessler some looks under center during spring practice, as everybody was yelling at their TV screens to give the player a chance in the Sun Bowl where Wittek was errant, missing wide-open players and practically giving the Yellow Jackets interceptions.

There’s been some talk and speculation in Westwood about coach Jim Mora going to the San Diego Chargers—even though his audition at Qualcomm Stadium didn’t go so well. Many are skeptical, however, that Mora would leave after one season, staking claims that he would want to build up an even better UCLA team. The Bruins finished 9-5 on a season that started out strong and then slowly collapsed. Though this year was a giant leap from last year (the Bruins were shut out by the Trojans 50-0). UCLA will need to focus mainly on its offensive line in 2013. If the bowl game was any indication, quarterback Brett Hundley needs to scramble less and stay off the ground. It goes without saying, but Hundley is best when he has the time to make surefire passes and calculated runs. It seemed like he was dared to run in UCLA’s Holiday Bowl game against Baylor, and if the result—a 49-26 whooping—taught the Bruins anything, it’s that UCLA needs to add more depth to its offense. The Bruins relied mainly on running back Johnathan Franklin to open up other team’s defenses, but when the Bears bottled up the Bruins’ running game, UCLA looked like a frustrated, futile bunch. Even Mora admitted in his Holiday Bowl post-game press conference that if Franklin can’t do anything, the offense is pretty much ineffective. So it was at the end of December.