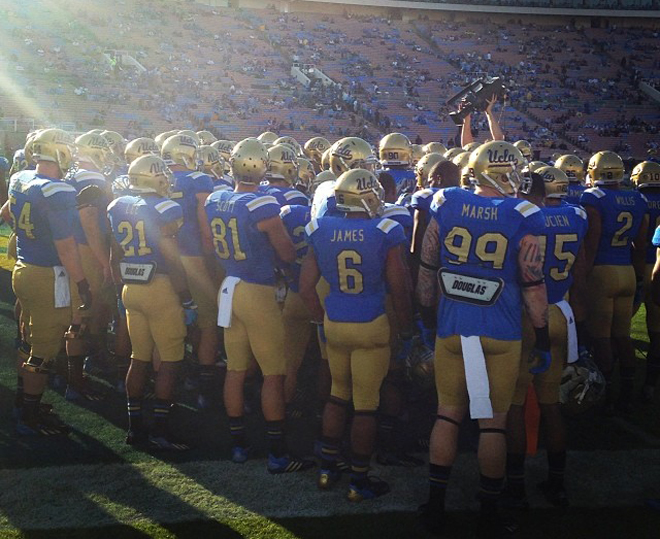 Nine games into the 2013 college football season, UCLA is just about exactly where we thought they’d be: Seven wins against inferior opponents, and two losses to the big boys of the Pac-12, Stanford and Oregon.

This past Saturday, the Bruins held on to a 31-26 victory late, fending off Arizona and its talented running back, Ka’Deem Carey. The win brings UCLA into a two-team tie with USC for second place in the Pac-12 South, while Arizona State rides high atop the division with just one in-conference loss.

The Bruins’ final three games of the season will bring the team into uncharted territory, a crossroads flanked on either side by the Fight Hunger Bowl and the Rose Bowl. Here’s our prediction for how it will all go down, beginning with Friday’s showdown at the Rose Bowl against Washington.

Fri, Nov. 15, Washington
To counter B.J. Denker, Washington quarterback Keith Price has the third-highest completion percentage in the Pac-12 at 64.3 percent. At this time, his team will be fresh off an easy win against Colorado, and that might be a problem. As we saw in the Oregon-Stanford game last night, weekday games tend to sneak up on teams, leaving them underprepared and overexposed against hungrier rivals. In a way, this game represents the meeting of two incredibly similar teams, each very talented and competitive against schools like Oregon and Stanford, just not quite good enough. We’re giving UCLA, with home field advantage, the edge.
Our prediction: 28-24, UCLA

Sat, Nov. 23, Arizona State
Arizona State benefits tremendously from not having played Oregon this year. The Sun Devils’ two losses this season came at Stanford, in a blowout-turned-sorta-nail-biter, and a non-conference against Notre Dame in AT&T Stadium in Arlington. This means that the Sun Devils, who also have a win against Colorado on their resume, could be facing UCLA with the opportunity to clinch the Pac-12 South and their first ever appearance in the Pac-12 title game. Arizona State traditionally chokes down the stretch, but this team is more talented and more balanced than in years past, with running back Marion Grice establishing himself as one of the Pac-12’s most consistent playmakers. The Bruins will put up a fight, but come up short.
Our prediction: 35-30, ASU

Sat, Nov. 30, @USC:
USC has to be about the toughest team to read in all of college football. Interim head coach Ed Orgeron seems to have his roster playing harder and hungrier. The new coach’s only real weak spot so far has been against Notre Dame, a winnable road game in which the Trojans failed to post a single point in the second half. While this end-of-season cross-town matchup was predicted by many to be a UCLA blowout ( the reverse of the 50-0 hammer dropped on the Bruins at the Coliseum two years ago), I think USC has started to find a rhythm. They also have a new offensive weapon in running back Javorious Allen, who came out of nowhere to score three touchdowns in a surprise win over Oregon State. Nevertheless, the talent of UCLA’s offense will prove too great, and the Bruins will earn their second straight W against the Trojans.
Our prediction: 31-28, UCLA (OT)