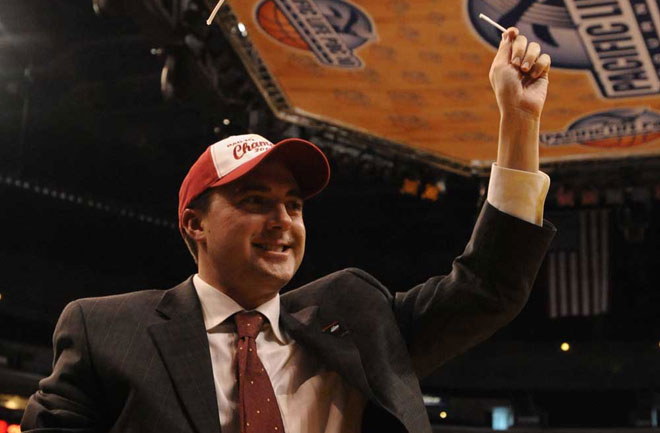 A little more than a week ago, USC men’s basketball coach Kevin O’Neill was relieved of his duties. For many Trojans and SoCal basketball fans, it didn’t feel like news; it didn’t come as a surprise. Last year, fans and haters alike saw USC hit an all-time low: 6-26 (a record-setting season of losses in Troy), and the man behind that team, the one that everybody pointed fingers at, was O’Neill. The fact is Trojans hate losing—no matter the context, no matter what’s at stake, no matter who’s in charge.

Many of O’Neill’s successes paled when compared to his shortcomings: a 48-65 overall record, last year’s less-than-galvanizing display, and a sluggish 7-10 start this season. The talk on campus was that nothing was changing, even with an improved roster, and athletic director Pat Haden heard the clamor. “Despite a nice road win in our last game, I felt it was best to make a change now, with most of the Pac-12 season still ahead of us, in order to re-energize our team,” he said in a statement on the firing. O’Neill left his post with dignity: “We just didn’t win enough last year and this year. That’s what this business is,” he told The Associated Press. “We tried to do as well as we could, tried to get the program to the highest level. My goal every day going in there was to try to win a national title.” A national title is galaxies away, but here to pick up the slack while a search is conducted for O’Neill’s successor is interim coach (former assistant coach) Bob Cantu.

The Big Whoop
When you look at Bob Cantu on paper you might ask yourself: What’s this guy doing as an assistant? He’s been coaching at the collegiate level for 17 years and has been with USC for 12 of them, making him the longest tenured assistant coach in the Pac-12. Through four coaching regimes with the Trojans, he’s seen the good, the bad, and the ugly—but the good has included some pretty superior highlights, including a ringer stint as a one-game head coach in the 2010-11 season, when he subbed in for O’Neill in the Pac-10 semifinal game. The Trojans took on the defending regular season champs Arizona and pounded out a 67-62 win. Cantu has also established himself as one of the NCAA’s premiere recruiters—11 players from Cantu-era ’SC have played or are currently playing in the NBA—and was rated the No. 2 assistant in the Pac-10 in 2010.

So how’s it going so far? With two games under his belt, it’s tough to say where a Cantu-led squad could end up. But if we’re simply judging the Trojans’ performances in these first two games, things are definitely looking up. What should’ve been a debut blowout in fact was not: the Trojans lost to No. 21 Oregon by a single field goal. The Ducks, who are 15-2 and undefeated in the Pac-12 (4-0), came to L.A. ready to sweep the competition. But the Trojans, in Cantu’s premiere, gave Oregon a fight, highlighted by J.T. Terrell’s 22 points and Eric Wise’s 17. Overcoming poor shooting and Terrell’s hot hand, you could say Oregon was lucky to come away with the W. Many would say a loss is a loss—and I agree—but a two-point loss to Oregon right after your head coach leaves isn’t a bad way to start anew. Especially when you follow that up with a 69-68 win over Oregon State thanks to some late-game heroics courtesy Aaron Fuller, who flipped in a layup with 4.8 seconds left to seal the victory. Though the game was close at the end, Cantu orchestrated a 15-point second-half lead—something we could stand to see more of. Both games were close, well played, and well directed.

They Cantu, But…
Consistency is the tried and true key for the Trojans basketball team. USC teams have the bad habit of stretching leads in the beginning of a game and then crumbling at the end. We saw it on the football field and now on the hardwood. The head coach’s chair is a volatile place to sit on any USC team, one that comes with astronomical expectations, a rabid fan base, and alumni that can’t stand to see less-than-.500 records. I don’t know the specifics of O’Neill’s successor search, but for right now, I like where Cantu is sitting.