Home Uncategorized Foam Finger: USC Won Something After All 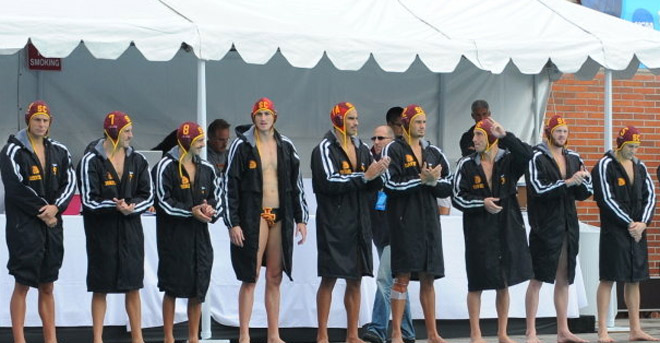 Sports pages have been filled lately with words about D’Antoni’s new offense, UCLA’s fresh, standout quarterback and who the Dodgers can and cannot sign. In that mix, USC football and its forever-unfinished business have received relatively small play. But, despite the school’s depressing run on the gridiron, the Trojans did have some unprecedented success.

The USC men’s water polo team captured its fifth-straight NCAA title, defeating UCLA at McDonald’s Swim Stadium 11-10 over the weekend and making history. The Trojans, who finished the season with a perfect 29-0 record, established themselves in the record books when they bested UCLA, 7-4, last year for a first-ever NCAA water polo four-peat. Number five gives the Trojans’ record some breathing room.

USC gave the home crowd a roller coaster ride of a finale, though, as UCLA led for most of the game. The championship bout abounded with dramatic moments—from a first period three-goal deficit to a midgame UCLA 3-0 run to a last-minute rifle shot from USC’s second leading scorer, Kostas Genidounias. The sophomore’s goal put the Trojans up 11-10 with just under a minute left to play, and that’s how it would end. The Bruins botched their last possession and USC ran the clock till it hit 0:00, when USC and Co. all jumped in the pool—including coach Jovan Vavic.

Vavic is something of an unheard legend at USC. This championship marks number eleven for him—he has won eight with the Trojans and three with the Women of Troy. And the men’s team is now somewhat of a dynasty, one that USC News is having a field day talking about it—but they’re kind of the only ones. The New York Times featured a Daily Trojan writer’s recap of title number four last year, but I don’t recall many local media outlets talking about this one. Maybe I don’t watch enough TV. This year, it seems, five is superfluous.

Why? Maybe because water polo isn’t huge in the U.S.—especially above the high school and college levels. Whatever the factors, the whole scenario speaks to the trend of smaller sports getting overshadowed by big-money ones. From a business perspective it makes sense. It’s safe to say USC water polo will never be able to rake in 90,000-plus attendees like USC football can. But from a fan perspective, USC’s big revenue-generating sports have been somewhat disappointing, and I bet you could make the same argument at other schools, too. Football is looking for redemption against Georgia Tech, a scenario USC never thought it would be in, while the school’s men’s basketball squad, though the season is just beginning, is already looking like a less-than .500 team. (I’m going to give coach Kevin O’Neill a chance but if this coming year is anything like 2012—with its record-setting low of six wins and twenty-six losses—USC Athletics will finish the year looking more like Charlie Brown than Tommy Trojan.)

Does it matter that so few people know we have an NCAA water polo powerhouse in our backyard? I think it does. I think great athletics deserve great recognition and great admiration. But I think the reality is that, for the coming years, dynasties like the Trojans will remain underwater and underexposed. Revenue sports, unfortunately, reign supreme.