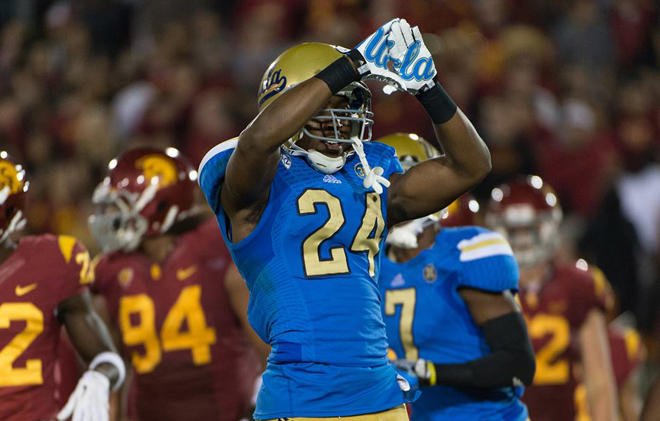 The last time UCLA beat USC at the Coliseum, I was in preschool. It was an important time in my own development and, oddly, it’s a pertinent fact with respect to Saturday’s game at the Coliseum because of comments USC interim head coach Ed Orgeron’s made before kickoff.

“Come Saturday night, we’re gonna let those little boys from across town into our stadium and we’re gonna lock the gates,” he said at the annual Conquest rally.

Meant as a cheer-worthy statement—the kind expected at a pep rally—the Bruins took offense, then used it to fuel the fire in what was already an inferno of a crosstown rivalry. In the end, the Bruins proved that, like me, they’ve grown up. Way up. UCLA beat USC, 35-14.

So what does the UCLA win mean for the two schools, both of which could be facing coaching changes? Here are some thoughts we had post game:

1. UCLA is officially the team to beat
Last year’s 38-28 victory could have been considered a fluke, but there’s no denying two-straight rivalry game wins. Plus, after halftime, it wasn’t even close. With 3:18 left to play in the third quarter, UCLA quarterback Brett Hundley escaped the clutches of USC linebacker Devon Kennard and raced to the end zone for a five-yard touchdown, his second of the game. Running back Paul Perkins crossed the goal line a quarter later to secure the blowout.

While only a sophomore, USC quarterback Cody Kessler showed once again that he isn’t Matt Barkley, passing for just 174 yards and surrendering a crucial fumble to UCLA linebacker Anthony Barr in the fourth quarter. Kessler should be especially worried because in his two years in cardinal and gold, he has yet to see a victory over the Bruins. Sure, Matt Barkley lost to UCLA in what became a highly disappointing senior season in 2012, but at least he had three rivalry game wins, too. As of Saturday, UCLA officially has momentum. Two in a row is a conversation starter, but three in a row next year could signal a new dynasty.

2. Coach O just missed
Ed Orgeron was beloved by players during his time as a defensive line coach and even as the interim head coach of USC. Picking up where Lane Kiffin dropped everything, he guided the Trojans to five straight wins. Before kickoff Saturday, dozens of USC players gathered in one giant “O” around Orgeron at midfield before raising their helmets and closing in on their coach. In the end, though, Orgeron’s Cinderella story fell one giant powder blue slipper shy of stealing away the USC job. When USC Athletic Director Pat Haden didn’t not offer Orgeron a permanent position Monday morning (Steve Sarkisian, a former Pete Carroll disciple and once-head coach of the Washington Huskies, has been named to the post), the former interim coach was “outraged” and resigned from the program.

3. Some Bruins have decisions to make
Sarkisian’s hire leaves an interesting vacancy, one that Jim Mora, a Washington alum, jokingly pined over as head coach of the Atlanta Falcons in 2006. It brings up what I believe to be the final possible fork in the road in Mora’s UCLA tenure. Last year, the Chargers reportedly came calling, but Mora stayed put in Westwood. If he turns down his alma mater, then it’s likely he’ll remain there for quite a while. For now, Mora maintains he’s on the recruiting trail as a UCLA coach. Add that to the fact that he was through-the-roof excited following Saturday night’s game, and I think the chances of Mora bolting for the Huskies are pretty slim.

As for his quarterback, Brett Hundley, getting a grip on the situation has been a bit more difficult. In two seasons as UCLA’s quarterback, the redshirt sophomore has had his lows—like brutal losses to Stanford and Oregon this season—and highs like Saturday night. His strong arm and ability to elusively run the ball on third downs make him a potential NFL talent, but the question has always been, “When?” After the game, Hundley deferred his announcement of whether he’ll declare for this year’s draft or not until after UCLA’s bowl game, leaving UCLA fans to wait at least another agonizing month before knowing if their quarterback will stick around.

The Bruins were victorious over the Trojans this year, but with both teams having nine wins during the regular season, each will be suiting up for a bowl game in less than a month. Like with Mora and Hundley, the bowl selections for their teams are a wait-and-see.