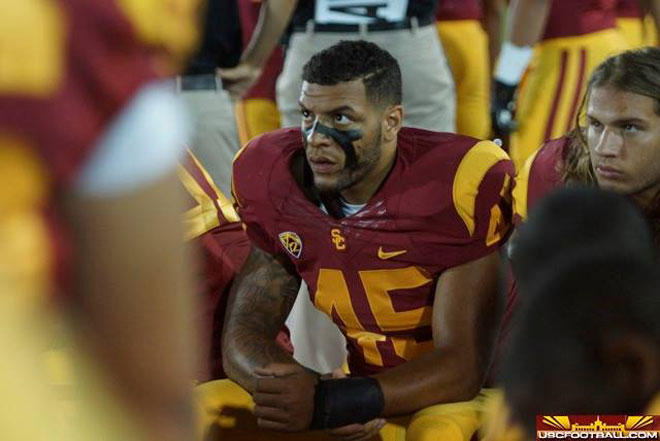 Well, this is awkward.

After a lackluster win over Hawai’i two weekends ago, USC’s offense managed to ruin the Trojans’ home opener, only scoring a single touchdown in the team’s 10-7 stinker at the Coliseum on Saturday night.

A once great offense that featured the likes of Carson Palmer, Matt Leinart, and Mark Sanchez pre-butt fumble passed for just 54 yards against the Washington State Cougars, a team that is consistently uncompetitive in the Pac-12. The Trojans attempted just 21 passes and converted just three of 13 third downs.

It’s no secret that USC has two of the best wide receivers in the nation in junior Marqise Lee and sophomore Nelson Agholor. On Saturday night, Lee left the turf with just 27 yards receiving and Agholor came away with nothing. Yes, nothing. What once looked like a Heisman-caliber season for Lee won’t likely be after all. His playmaking ability, speed, and soft hands are present as ever, but with a quarterback controversy the likes of which USC is experiencing now, his entrance to the NFL can’t come too soon.

Of all the losable games on the Trojans’ schedule, I didn’t think this was the one we’d bungle so badly. Don’t get me wrong, USC showed off a few strengths on the field, including a knockout defense that allowed just three points and a tough, gritty rushing performance by running back Tre Madden.

But, alas, football isn’t scored like golf and it takes an offense to light up the scoreboard and consistently win football games. Right now, the Trojans don’t have that, and their 2013 season is on the verge of panic mode if it hasn’t reached it already.

What concerns me most as a fan is the lack of answers to the question, “What happened?” Rather than holding a Monday press conference, coach Lane Kiffin copped-out posted a YouTube video explaining his decision to start Cody Kessler over Max Wittek in the team’s next game against Boston College, a fact he almost refused to confirm in what looked like a pre-planned Q and A with a USC athletics staffer.

When underhanded the softball question of how he plans on fixing the team’s anemic passing game, Kiffin said, “We’ve just got to make sure we’re doing what we do really well.” Huh?

If USC wants to get back to its title-contending self or at least be competitive in a talented Pac-12 this year, it needs to get back to its pass-happy, risk-taking roots, allowing the team’s best athletes to spread the field and get some space. It’s become obvious that bubble screens and a slew of short passes have made the Trojans about as predictable as the ending to a romantic comedy.

For USC, however, this season could quickly turn into a horror flick. And judging by the “Fire Kiffin” chants ringing loud and clear in the Coliseum on Saturday night, I think we know who might be next to disappear.