Home Uncategorized Foam Finger: The World Series is Within Reach 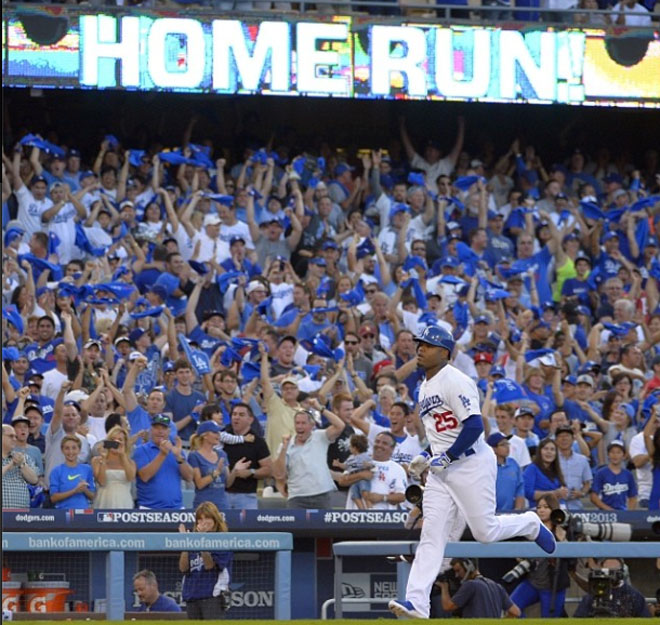 Just one more win. That’s all the Dodgers need to finish off the Atlanta Braves—a perennial National League powerhouse that holds home field advantage in the Division Series—and move within four games of earning their first World Series game since 1988.

Clayton Kershaw, brilliant as usual, struck out 12 Braves—left only to Tomahawk Chop at No. 22’s devastating curveball—in seven innings on the bump, his first-ever postseason victory.

In game two Zack Greinke’s pitching should have earned the Dodgers a 2-0 lead heading out of Atlanta (he allowed just two runs in six innings of work), except the Braves showcased their clutch hitting in the seventh inning in the form of a two-run Jason Heyward single that brought the score to 4-1. Hanley Ramirez clobbered a two-run homer in the eighth, but it was too little, too late and the Dodgers dropped game two by just a run.

On Sunday night, the Boys in Blue returned home to a raucous crowd of 54,646 and showed they didn’t really need a pitching staff, scoring four runs in the second and fourth innings and adding three more in the eighth to put the Braves on the rope with a 13-6 victory. Hyun-Jin Ryu pitched exactly how I would’ve expected a rookie to pitch in his fist postseason start, surrendering four earned runs in three innings before being yanked. Apparently fellow rookie Julio Teheran of the Braves ate even fewer Wheaties on Sunday morning; he allowed eight hits and six earned runs while recording just eight outs.

Ricky Nolasco, an eight-year veteran who has never pitched in the postseason before, will likely get the nod for the Dodgers tonight since our boys aren’t facing elimination. In his lone start against the Braves this season on July 3, Nolasco allowed just two runs in seven strong innings. The Dodgers won that game 6-3. (UPDATE: The Dodgers announced that Clayton Kershaw, the strongest safety valve in baseball, will in fact be starting in tonight’s game).

While two-game comebacks are rare, the thought of this series going to a Game 5 in Atlanta puts me on edge, big-time. Please, Dodgers, pop champagne at Dodger Stadium tonight and save the whole cross-country flight thing for a NLCS showdown with either St. Louis or Pittsburgh.

That being said, with the way Puig and Ramirez are hitting—.462 and .538 in the series, respectively—my money is on the Dodgers to come out relaxed and confident, and to punch their ticket to the NLCS tonight.

Be sure to tune in and wear blue tonight. These Dodgers have a series to clinch.