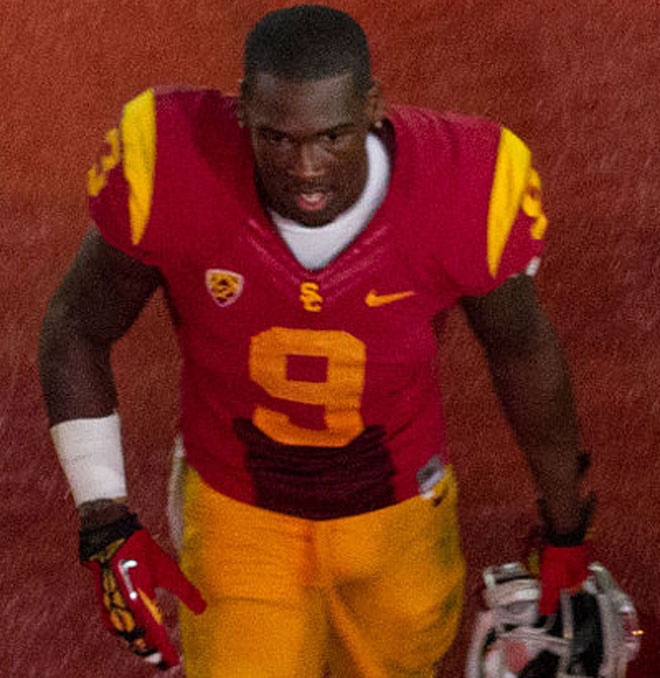 On Friday, with just twenty days to go until USC football’s season opener at Hawai’i, the Trojans were about ready to sound the alarms and officially declare panic mode. To add to the uncertainty of a drawn-out quarterback competition between Cody Kessler, Max Wittek, and Max Browne (granted, all were five-start recruits), All-Pac-12, All-America—heck, All-Everything—wide receiver Marqise Lee had ended the Trojans’ end of week practice with his right shoulder in a sling, leaving everyone to fear the worst.

Thankfully, the sling and the cart that helped Lee off the field proved to be mostly a formality; X-rays on the junior didn’t show serious shoulder damage and Lee was announced as day-to-day. USC fans have likewise been day-to-day suffering from a brief anxiety attack.

Lee, who should contend for a Heisman Trophy this season, is by no means USC’s only weapon heading into the 2012 season. The Trojans return five 100-yard plus receivers from last season, not including Lee or Woods, and will continue to recruit well, as they always have, to bring in new talent in the coming years. But statistically and emotionally speaking, Lee’s presence is by far the most important, and is perhaps season-changing. His 1,720 receiving yards from a season ago account for nearly half of USC’s 3,670-yard total. Should he be out, the next highest grossing receiver from last season, Robert Woods, won’t be any help; He and his 846 receiving yards, along with 12 touchdowns, are headed to Buffalo after he was selected in the second round of the NFL Draft.

Even during some of USC’s most head-scratching games last season, Lee managed to carry his entire team upon his shoulder pads. In a loss to Arizona in Tucson, a game that would begin to take the Trojans off the rails in the 2012 season, Lee compiled video game statistics, sprinting and cutting his way to a frightening 16 receptions, 345 yards receiving, and two touchdowns. When USC lost to UCLA for the first time since 2006 in October, Lee produced once again, catching nine passes for 158 yards and a touchdown.

Simply put, he has driven fear into the mind, and influenced coaching decisions, of many Pac-12 coaches, including UCLA’s Jim Mora. When asked whether a defensive back, one of UCLA’s deficiencies heading into this season, was one of the easier positions for a freshman to transition to from the high school game, Mora chuckled and pointed in Lee’s direction as an example of someone who has the talent to make a freshman safety’s life miserable. “Do you see that guy up on that stage up there?” Mora asked in return. “Marqise Lee? Yeah.”

From what USC coach Lane Kiffin has said, Lee should be back “very soon.” In the meantime, his workload has been reduced until it’s certain his shoulder is back to 100 percent. Lee’s presence on the field alone this week is reassuring to those who sport cardinal and gold. We know that as he heads into what will likely be his final season in a USC uniform, Marqise Lee will be forced to carry the burden of the Trojans’ Pac-12 title hopes. Here’s hoping he does it with a fully healthy shoulder.