Home Uncategorized Foam Finger: The Casual L.A. Fan’s Guide to the Rest of the... 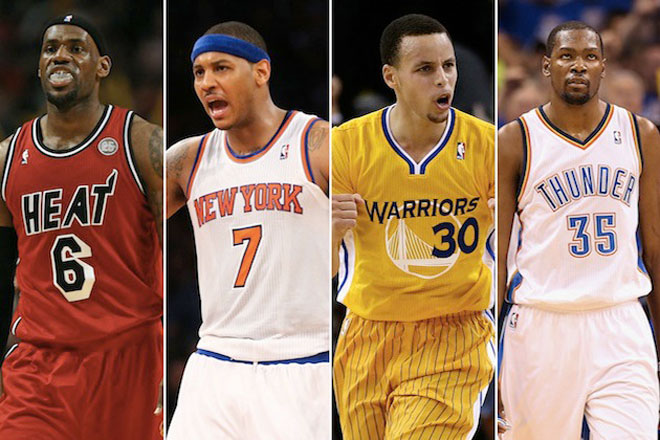 With the Lakers and the Clippers wallowing in their off-seasons, L.A. basketball fans find themselves in the awkward position of figuring out who to root for instead—or whether or not they should even care about the rest of the postseason. My guess is a handful have checked out entirely—and I don’t blame them. Not after what happened with Kobe Bryant. Not after what happened with an embarrassing, history-making-in-the-worst-way performance by the Clippers. So what’s the point? Well, LeBron James and the Heat are on their way to securing another championship—that is, unless the Bulls have something to say about it. All the teams left are currently tied 1-1 in their series, and the match-ups—whether you like the teams or not—have offered exciting, close games. O.K., with the exception of last night’s Bulls drubbing.

Here’s a rundown of who’s left, who to root for, and why:

1. Memphis Grizzlies vs. Oklahoma City Thunder (series tied 1-1)
Russell Westbrook is out? Doesn’t matter. The Thunder, thanks to the superstar efforts of Kevin Durant, took Game One in this series. If it weren’t for some unlucky bounces in Game Two, they’d be up 2-0. Of course that’s the go-to excuse for any close Playoffs game, but I have faith that Durant and Co. will avenge Lob City just fine. Durant looks more than hungry after what happened last season, Rumble the Bison is just getting warmed up, and there’s the Ewing Theory to consider. (I’m not 100% sure it applies, seeing as Durant is still on the floor, but I like the Thunder’s chances nonetheless.)

2. Golden State Warriors vs. San Antonio Spurs (Series tied 1-1)
NorCal has never really been our best friend in sports, but anything is better than watching the San Antonio Spurs’ fundamentally fun-free basketball make its way to the Finals. Game One was close, but Manu Ginobili played the hero card, notching a win at home for San Antonio. Then Steph Curry and Klay Thompson exploded last night, nailing three after three and acrobatic lay-up after lay-up. Whenever the Spurs had something to say, the Warriors had an answer. The Warriors head back home now with one more win than most were expecting and the chance to torment an already-troubled Spurs team.

3. Miami Heat vs. Chicago Bulls (Series tied 1-1)
Does this pick really need an explanation? Watching Nate Robinson’s triple-overtime exploits against Brooklyn was something else. He was also the key to the Bulls’ first win in the series. The Heat stormed back with a near-40-point response yesterday, but that doesn’t guarantee they’ll take the next handful of games at Chicago’s United Center. Robinson and Co. have shown that they can roll past teams even without key players (Kirk Hinrich, Luol Deng, Derrick Rose), but this series could definitely use their help. The Robinson-Thibodeau “Next Man Up” strategy is fun to watch but it might not be the most effective. Fingers crossed, though.

4. Indiana Pacers vs. New York Knicks (series tied 1-1)
Does anybody care about this match-up? I would assume no if you’re on the West Coast, though the Knicks have proven to be one of the more fun teams to watch this season, with their own star/firepower: Carmelo Anthony, Tyson Chandler, J.R. Smith, Raymond Felton, among others. The Knicks have rediscovered an old rival in the Pacers, and though they lost Game One, the Knicks (much like the Heat) re-established dominance in Game Two. The Heat will most likely storm past the Bulls, so keep your fingers crossed for the Knicks. If there’s anybody that can take on LeBron James in a bout of head-to-head superstar helming, it’s Carmelo Anthony. Remember the Oak Hill Academy days?

Overall: Oklahoma City
If you’re not rooting for Durant and Co., you should ask yourself why. Just kidding. But really. Last year’s Finals letdown was heartbreaking to watch, and even harder to stomach was James and Co. celebrating vigorously. If you’re not rooting for BronBron, the team to support is without a doubt the Thunder. Not our brothers to the North. Not anybody else. I don’t want to see Durant cry again. I do want to see more game-winners and against-the-odds performances. Can I get an Amen?