Home Uncategorized Foam Finger: The Battle of L.A.—Not So Much 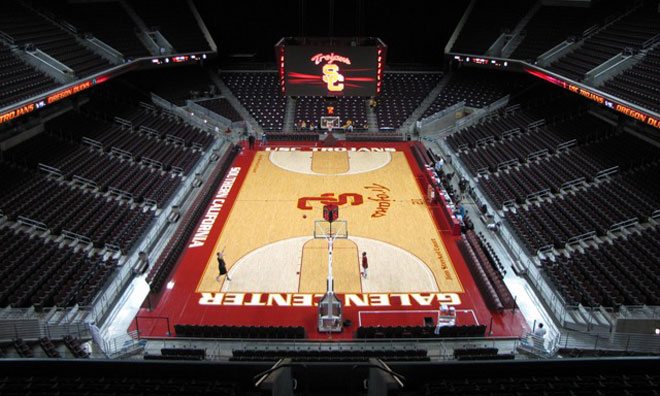 The Galen Center on Sunday became a nightmarish version of what Trojans fans aren’t ready to face: reality. Crosstown rivals from Westwood stormed into the arena, stomached a superfluous string of Trojans-beat-Bruins images from earlier in the season, and then swiftly handed USC a 75-59 drubbing. What happened to that Cantu spirit?

The beginning of the season seemed like it was filled with a kind of promise. Former USC coach Kevin O’Neill ankled his post, and then everything seemed right in the world. I had hoped the squad would get an extreme makeover: roster and strategy edition.

But USC sits at 12-15, 7-7 on the season—yes, a huge step up from last year, but still not what we’re looking for. I’m going to go ahead and call the UCLA victory earlier in the season a fluke. In fact, I’m calling a lot of the USC wins this season flukes. Look what happened Sunday: UCLA, now 20-7, 10-4, wasted no time grabbing buckets early, notching a 7-0 lead, holding it to 21-8, and skating to an easy victory the rest of the way—all with the help of a mere seven scholarship players. USC floundered. Point guard Jio Fontan capped the night with just four points and the team feted the Bruins with 17 generous gifts in the form of turnovers.

Cantu and his Trojans were touting a four-game winning streak a couple weeks ago; then they played Cal and UCLA. The game against Cal on February 17 saw USC give up a 15-point second-half lead. It was disappointing to say the least. And USC’s failure to ignite against the Bruins engenders similar sentiments—those that have the potential to make the Galen Center one of USC’s most costly and empty financial endeavors.

Basketball is technically a revenue sport for USC. But right now USC’s money is, well, it’s likely you know what I’m going to say. We all know where USC stands in terms of finding a partner for the Big Dance, and right now students either don’t go to games at all, or they leave early. The Galen Center opened in 2006 to great fanfare, but since then, it’s sagged and hasn’t become the sports powerhouse the Trojan Family was expecting. Financial goals are important, but I’d like to see the collegiate Battle for L.A. get some of its grit back. Here’s what team followers are saying on Twitter:

Up next: The Trojans square off against Arizona tonight at 6:30 p.m., and the Bruins take on Arizona State tonight at 8:30 p.m.