Home Uncategorized Foam Finger: The Bases Are Loaded for a Dodgers Postseason 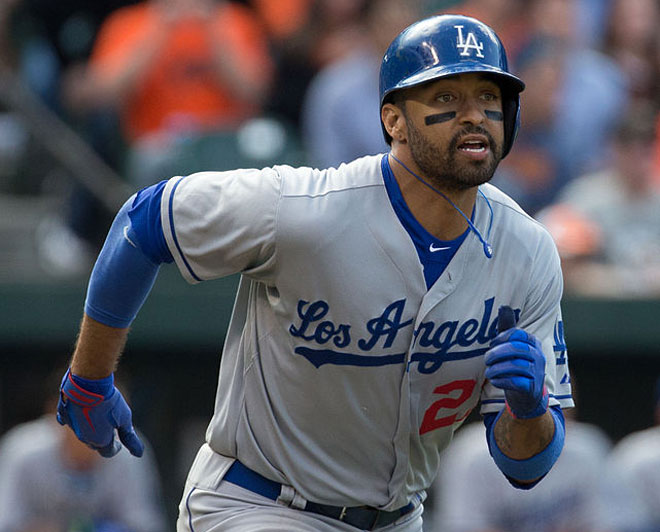 It’s been a rough week for Matt Kemp.

Not only did the Dodgers center fielder get confirmation that he was robbed of the 2011 National League MVP trophy when Ryan Braun of the Brewers was suspended Monday without pay for the remainder of this season for his involvement with the Biogenesis lab, but he was also relegated to the disabled list for the third time this year on Sunday.

The play that will keep Kemp off the field until at least August 6 ended in what appeared to be a freak accident. In the ninth inning of a game in which the Dodgers were leading the Nationals 9-2, Kemp broke to the plate late on a slow roller to the right side that he thought would result in the inning’s third out at first base.

Instead, a speedy Carl Crawford reached first base safely, making Kemp a sitting duck for a force out at home. One awkward slide into catcher Kurt Suzuki’s shin guard later, and Kemp’s grand return from the disabled list was reversed.

The heartbreaking part about Kemp’s one-game showcase is the way it left us salivating. Rather than easing his way back from injury with a quiet night at the plate, the center fielder erupted, getting three hits in four innings, including a no-doubt blast to left field in his first at bat since July 5. But in the blink of an eye and the twist of a left ankle, his durability is being called back into question.

Perhaps ironically, durability was once considered one of Kemp’s strengths. From 2008 to 2011, No. 27 only missed 11 games total and played in 399 consecutively. Lately, however, the former “Iron Man” has been drawing “Mr. Glass” comparisons; he missed 56 contests last season and 39 so far this year.

In May, it was a hamstring issue that kept Kemp out, just like last season. Earlier this month, he felt irritation in the same left shoulder that was surgically repaired in October. Though the Dodger should be able to tough it out for the season’s last two months when he returns, he’ll likely need it cleaned out again this offseason.

While we’ve grown frustrated with Kemp’s inability to stay healthy while collecting $20 million a season, it’s commonly known in baseball that champagne heals all. If these worst-to-first Dodgers can build upon a July in which they have gone a white-hot 15-5 and play October baseball for the first time since 2009, we’ll be quick to forgive Kemp the 40-something games in which he didn’t play and celebrate the possibility of his NL West title-clinching September return.

Including last night’s 5-2 loss, the Dodgers have gone a respectable 22-17 without Kemp, leaving us to ponder the impact of keeping him on the DL this time for as long as he needs. In his absence, Hanley Ramirez, Adrian Gonzalez, and even former DL frequenter Carl Crawford have picked it up at the plate, and the entire team has been carried by a starting rotation with the MLB’s fourth-lowest ERA.

We’d love to see Matt Kemp as a lineup regular again and soon, but for now—and for October’s sake—he needs to take his time.