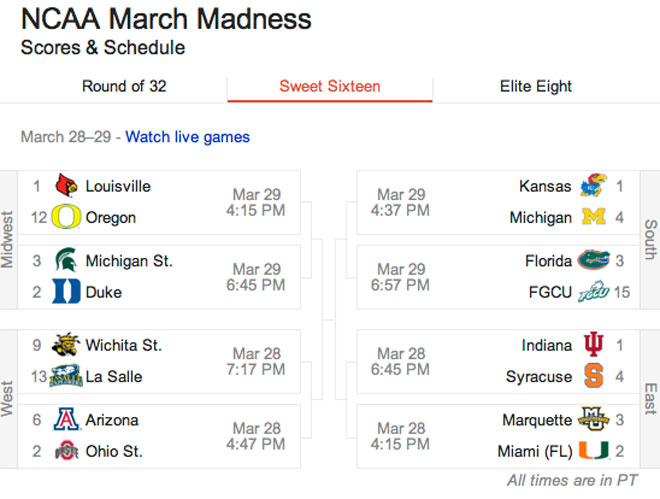 March Madness (or Sadness) is in high gear, and if you didn’t get creative in the early rounds of the tournament, chances are your bracket’s probably hurting right now. Who would’ve guessed Wichita St., Oregon, Florida Gulf Coast, and La Salle would make it as far they did? Who (besides my uncle) would’ve guessed that Georgetown and Gonzaga would’ve left the Big Dance so early?

Very few betting fans will rake in the dough and have the last laugh when all is said and done in Atlanta. What’s it like to be an NCAA champ without lobbing a single shot? We interviewed “Jake”—a 2012 bracket winner who bagged a substantial purse and wished to remain anonymous—to hear what winning feels like and to see if we could pick up some tournament-tested bracketology tips. With some unforeseen Sweet Sixteen bouts (March 28-29) fast approaching, he points out that this year’s tourney is a far-cry from the last.

You won a big-bucket bracket last year. Tell us what happened.
The bracket I won was a fairly anonymous and random Internet bracket with about 800 strangers that I entered only because none of my friends joined the Facebook bracket I’d been running for the last two or three years. A friend who felt bad about my low turnout directed me to it. At about $30 per entry, the total purse was more than $20,000, and l’ll just say a good chunk of that went to first place. I entered twice, and after the first weekend I realized I was in good shape, but didn’t believe I would actually win. A friend who is a finance guy even sent me spread sheets illustrating why I should hedge my bets and thought I was insane when I let it all ride going into the final. I chose Kentucky to win it all because they were overwhelming favorites, and I chose a lot of upsets in the early rounds mainly because the pool I was in rewarded them. I also did a light scan of expert picks and buzz, though I’ve never believed in super over-analysis. It’s too much work for something that is based so much on luck.

How’s your bracket looking this year?
Like an idiot I entered the same pool again with ridiculous expectations. It’s safe to say there is no repeat in my future. I went with more or less the same non-intensive pick strategy, but this year has been insane. I’m very curious to see who wins.

Who do you have winning?
I have three brackets this year and took Louisville in one and Indiana in two.

What do you consider the biggest upset thus far?
Well that Georgetown loss upset me pretty badly, personally. And by the numbers it was a huge upset.

Which team has been the most underwhelming?
Gonzaga. That’s not original of me to say since they just lost, but they don’t deserve a No. 1 seed coming out of their conference, and they’re perennial under-performers in the tourney.

Which under-seeded team will ruin your bracket (and perhaps others), if it hasn’t already?
Florida Gulf Coast. They beat Georgetown and ruined my best bracket. I’ve never even heard of the school. I hate them.

Which team is your dark horse favorite?
Syracuse is playing like a team possessed. The Big East has been sort of maligned after being a powerhouse conference for years, but Cuse looks awesome in the tourney up to this point. They are a No. 4 seed, so calling them a dark horse might be an overstatement, but they look good.

Who is (or was) your favorite player to watch in the tournament?
Marshall Henderson on Ole Miss. He reminded me of my friends growing up and willed his No. 12 seeded team over a No. 5 in the first round. Some people think he’s a jackass, but it was entertainment to me.