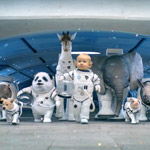 The Buffalo wings were procured. Beyoncé killed it. The power at the Superdome went out, came back on, and then the Ravens beat the 49ers, 34-31. All the while, the words Taco Bell, Audi, Doritos, and Toyota subliminally (okay, pretty overtly) took our minds Inception-style. Angelenos today joined the nation by tuning in to watch John Harbaugh’s Ravens and Jim Harbaugh’s 49ers battle for gridiron supremacy. If you missed the big game, SportsCenter should have you covered with those highlights. As for what everyone will be talking about tomorrow at work (aside from the spontaneous third-quarter, half hour-long stretch break)? This Super (Bowl) Commercial roundup should come in handy. For the sake of a touchdown, and in no particular order, here’s our pick-six:

1. “Viva Young”
A Spanish rendition of one of last year’s most popular songs, old timers, old pranks, and … old nipples? Yeah, this one’s a weird amalgamation of things that, quite frankly, don’t speak to anything Taco Bell. Remember your most epic college night out, then replace you and your friends with your grandparents. Uncomfortable-funny, right?

2. “Grandpa Goes Wild”
In this Super Bowl Taco Bell ad teaser, gramps has got himself a souped-up four-wheel mobility scooter and he’s drag racing against—himself. He goes wild, wreaking havoc on the gridiron, and, probably, his frail bones. We hate the idea of anyone—especially sweet old grandpa—getting hurt. But throwing caution, responsibility, and civility into the wind for one wild ride on the Super Bowl field? That looks like fun.

3. “Prom”
Ever been on the receiving end of a really gnarly black eye? Not pretty. Than again, neither is crashing your high school prom. But this car commercial makes both look sweet. By the end, this highschooler’s got balls, a shiner, and a sick Audi (if only for a night). Life is good.

4. “Team”
In the spirit of the big game, Hyundai’s whipped up a pretty quirky 30-second spot that features a little bit of bullying and a lot a bit of attitude. From its red-headed weight-lifting twins to wrestling bears to badass moms this commercial might not  necessarily make you want to buy a Hyundai. But it will definitely take you back to your grade-school football glory days.

5. “Wish Granted
This Toyota ad is short, sweet, and impactful. Plus, who is against watching Kaley Cuoco (swoon) transform the lyrics from Skee-Lo’s hit “I Wish” from musings into reality?

6. “Fetch”
Doritos always delivers one of the Super Bowl’s heavy hitters, and this year’s ad lives up to the brand’s hype. My favorite features an uber-efficient, trigger-happy dog. This is probably why my parents never got me one for Christmas. Makes sense now.

AND NOW FOR THE PAT

7. “Space Babies”
Where do babies come from? I want to believe the dad in this Hyundai/Kia Sorento spot. Suited up, those baby pandas are super cool.

8. “The Next Big Thing”/“El Plato Supreme”
Shenanigans courtesy Seth Rogan, Paul Rudd, and Bob Odenkirk for Samsung. That is all.

L.A.’s Estimated $477 Million Super Bowl: Here Are the Big Winners Off the Field