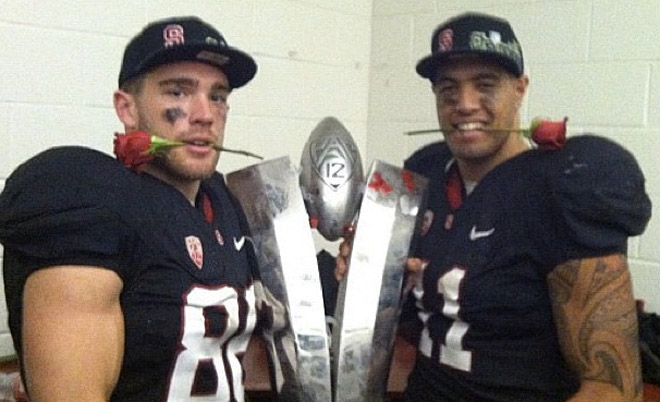 Before November—before the rain and the bowl projections came—many thought Oregon and USC would be facing off in the Pac-12 championship. Fans in Los Angeles probably didn’t expect to see the North and South divisions panning out the way they did. They probably didn’t expect to see any buzz about “unfinished business” in South L.A. dissipate into irrelevant business. But that’s how it happened, and Friday night’s title game featured a brand-new SoCal-NorCal rivalry.

No. 17 UCLA faced off against No. 8 Stanford in Palo Alto’s Stanford Stadium, where the Bruins fell to the Cardinal, 24-27. Pac-12 Commissioner Larry Scott presented the conference trophy to a Stanford team that was, so to speak, smelling roses. Led by Coach David Shaw—who said, “You got to finish what you started”—the Cardinal prepare for a trip to the Rose Bowl after finishing the regular season 11-2.

Stanford’s Rose Bowl berth came at the hands of freshman quarterback Kevin Hogan, who took home the Pac-12 MVP trophy and finished 15-of-22 on the night for 155 yards passing and one touchdown and 47 yards rushing for another score. He dueled UCLA freshman quarterback Brett Hundley in a tight, neck-and-neck finale in front of an announced crowd of 31,622.

The young arm slingers held their own and led their squads with poise, both scoring on their first possessions: UCLA scored first on a 51-yard run by running back Johnathan Franklin. Hogan answered back with a one-yard bootleg play that faked everybody out. Records were broken on both sides of the field; Franklin surpassed Maurice Jones-Drew for most all-purpose yards in a Bruin’s career and broke Karim Abdul-Jabbar’s single-season rushing record of 1,571 yards while Stepfan Taylor became Stanford’s all-time leading rusher.

The night was Hogan’s, though. He capped the game with an under-pressure 26-yard touchdown toss to Drew Terrell that tied the score early in the fourth quarter. Jordan Williamson kicked field goal number two to clinch the lead, and though the Bruins almost came back, Ka’imi Fairbairn kicked a 52-yard field goal wide left, giving Stanford the win and its first conference title since 1999.

For L.A. fans, both SoCal teams will be heading to bowl games—just not the “granddaddy of them all.” Some project USC will head to El Paso for the Sun Bowl, and UCLA will suit up for the Alamo Bowl. Though Angelenos probably would have liked to see one of the two competing in Pasadena, the Cardinal will take on the champion of the Big Ten final—either Nebraska or Wisconsin—on January 1.

No. 14 Nebraska plays Wisconsin in the Big Ten championship game, which will begin at 8:17 p.m. ET on Saturday. The game will be televised nationally on Fox.