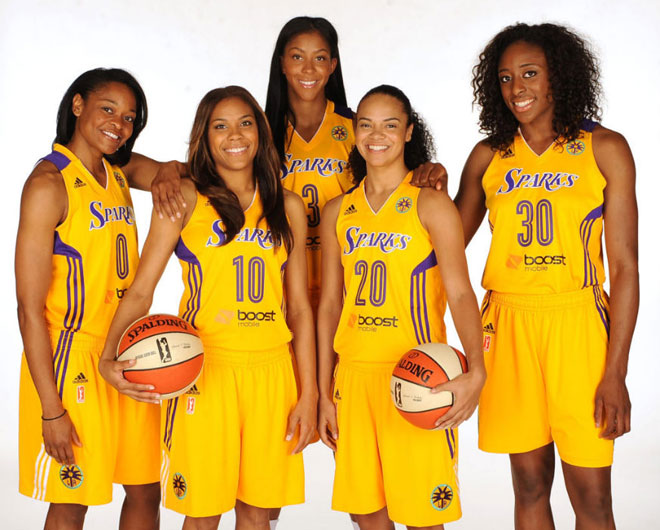 We have some sports wishes for 2014: May Kobe’s knee heal well, and soon. May Yasiel Puig drive the speed limit and wear shoes not made of lead. And may Steve Sarkisian pick up the USC football team and move it far, far downfield from where Lane Kiffin left it.

Unfortunately, one L.A.’s sports teams is off to a less hopeful start. Yesterday the WNBA league office told the Associated Press that Sparks Chairman Paula Madison had informed them in late December that she and her family would relinquish control of the team.

The prospect of new ownership doesn’t alone mean anything drastic for the Sparks, but it is sad to see WNBA franchise owners relinquish the role. I don’t think ownership malpractice is the issue here, so we don’t have another McCourt on our hands. The Sparks are a flagship franchise in the WNBA, as were the Dodgers in Major League Baseball, but the WNBA is frankly a much tougher league in which to sell tickets. The Madisons say they have lost $12 million since they took over in 2007.

In places like Connecticut, a women’s basketball Mecca of sorts, as well as Tulsa— markets without competing NBA basketball franchises and smaller arenas—getting fans into seats proves far less difficult.

Despite having NBA franchises to compete with, the Phoenix Mercury and Chicago Sky, who welcomed rookie sensations Brittney Griner and Elena Delle Donne, respectively, averaged individual attendance increases of 17 and 9 percent from 2012 to 2013—but they did so while Chicago star Derrick Rose was out battling an injury, and the Suns struggled with a less-than-memorable starting lineup.

Without a first-year superstar like Griner or Delle Donne, drawing a loyal fan base here in Los Angeles where Kobe Bryant, Blake Griffin, and CP3 dominate is a challenge. What’s more, the Sparks share a venue with the Lakers and the Clippers. The problem with sharing the Staples Center is never scheduling—it ‘s the limited number of basketball fan bank accounts to go around. Non-season ticket holders only have so much money to make Staples Center basketball visits each year, and the sad truth is brands like Lob City and the Lake Show (or maybe just the Kobe System) win out easily over a hardly identifiable Sparks team.

All of which means the Sparks are facing quite the predicament. They have won the WNBA title twice, made the playoffs 11 times and pretty consistently produced a competitive team. They also have had two of most popular and successful players in WNBA history in Lisa Leslie and Candace Parker, and signed Tina Thompson as a free agent in 2008 during Parker’s pregnancy. Do they have hometown appeal? Both Leslie and Thompson were USC standouts. Go to the Galen Center—Leslie’s jersey hangs from the rafters.

To the next owners of the Sparks—and I sincerely hope there will be next owners of the Sparks—I hope you find a financially productive way to market this team and its star players. The team faces an uphill battle in the local market, but it’s a battle worth fighting. The Sparks have been a part of the Los Angeles sports culture since 1997. It’d be a shame to see that fade.