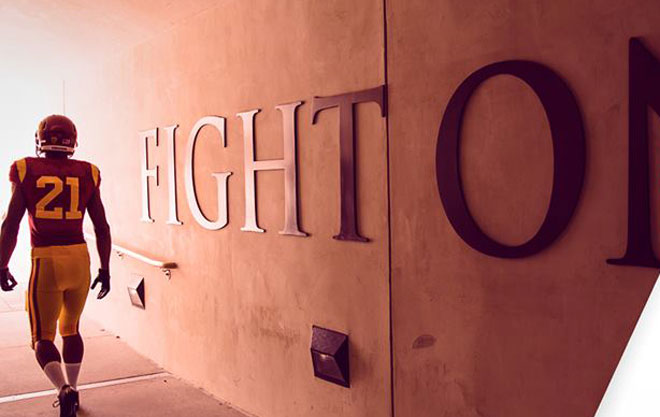 After a rather traumatic appearance at the VMAs over the weekend, the Foam Finger is back—and promises to keep it classy.

Starting this Saturday, we’ll ditch the blurred lines across the nation for chalk ones on grass, a much-needed change after months of absence. For the Trojans of USC, that kickoff comes even sooner with a Thursday opener in Honolulu against the University of Hawai’i.

With running back Silas Redd recovering from knee surgery and coach Lane Kiffin suffering a quarterback decision-induced brain bruise, we take a crack at the Trojans’ 2013 schedule week by week, predicting what kind of success the post-Barkley era will bring.

Aug. 29, @Hawai’i
We predict: W, 42-17
When the Warriors visited the Coliseum last season, they fell 49-10, kicking off a nightmare season that resulted in a 3-9 record, two of their three wins came against two of the worst schools in the country, one against Lamar, an FCS school, and the other against South Alabama, the Sun Belt’s worst team in 2012.  Wittek? Kessler? No matter, put this down as a win—in ink.

Sept. 7, Washington State
We predict: W, 48-14
Washington State coach Mike Leach began his run at Washington State last year with a 3-9 season and his most talented wide receiver, Marquess Wilson, leaving the team after citing abuse at the hands of the coaching staff. The Cougars avoided the Trojans in the first two seasons of the Pac-12, but aren’t as lucky this season.

Sept. 14, Boston College
We predict: W, 27-3
Quarterback Chase Rettig will return for Boston College’s 2013 season, but even that continuity won’t help the Golden Eagles, the ACC’s last-place finisher from a season ago (I’m sensing a trend here). Expect USC linebackers Morgan Breslin and Dion Bailey to be all over one of college football’s worst offenses. Fun fact (unless you root for BC): Boston College is winless in all three of its previous meetings with USC.

Sept. 21, Utah State
We predict: W, 16-15
In its first meeting with Utah State since 1989—which resulted in a 66-10 Trojan victory, by the way—USC faces its first real test of the season. The aggies finished 11-2 and ranked No. 16 in the AP college football poll last season, just five points away from an undefeated record. The Trojans should name a single quarterback by this point because Utah State has a very, very talented one in Chuckie Keeton. At home, though, USC earns the slight edge.

Sept. 28, @Arizona State
We predict: L, 35-34
Can you say, “trap game?” When the Trojans head to Arizona State, they face a rising star in junior quarterback Taylor Kelly, who mans a team that has dark horse Pac-12 South potential. Even during the Barkley years, the Trojans struggled in Tempe, losing 43-22 in 2011 and squeaking out a 14-9 win in Barkley’s freshman season.

Oct. 10, Arizona
We predict: W, 56-10
A “perfect storm” of a bye week, a recent loss to ASU (as we’re calling it) and the painful memory of effectively losing a BCS bowl berth in Tucson last year results in an absolute smack down at the Coliseum. Even in last year’s loss, receiver Marqise Lee came away with 16 grabs for 345 yards. Press rewind, then press play.

Oct. 19, @Notre Dame
We predict: W, 20-13
As we all know, Manti Te’o’s girlfriend looked nothing like she did on the Internet. This year, the Fighting Irish will look nothing like they did on the field last year, with their talented yet gullible linebacker now suiting up for the San Diego Chargers. Quarterback Everett Golson will likewise be out for the season after being suspended for “poor academic judgment.” Even in one of college football’s toughest environments, the Trojans pull out the gutsy win.

Oct. 26, Utah
We predict: W, 35-20
This October, the Trojans trade with the Utes, avoiding a late-fall weather question mark at Rice-Eccles Stadium by getting to play this matchup in Los Angeles. The Utes, 5-7 a season ago, pose no real threat to the Trojans, especially after losing aptly-named Star Lotulelei, an all-conference defensive tackle, to the Carolina Panthers.

Nov. 1, @Oregon State
We predict: W, 24-21
The last time the Trojans visited Corvallis, the result wasn’t pretty, with Barkley and Co. losing 36-7, marking USC’s second worst-defeat in the two schools’ 74-game history. And even though the Beavers will probably still be in contention for a Pac-12 title game berth at this point, the Trojans will take aerial advantage of First-Team All-Pac-12 corner Jordan Poyer’s absence.

Nov. 9, @Cal
We predict: W, 45-16
Oh, Cal’s starting a true freshman at quarterback? Star wide receiver Keenan Allen now plays for the Chargers? Be sure to have something good to watch on the DVR, folks; this one will be over by halftime.

Nov. 16, Stanford
We predict: L, 32-20
There’s a reason Stanford is a consensus top-five team heading into this season, and that’s consistency. A stout Stanford offensive line and hard-hitting group of linebackers and safeties will have eight days after playing Oregon the week before, a game they could also lose and be very angry about. I expect the Cardinal to come out mean and prepared as ever.

Nov. 23, @Colorado
We predict: W, 52-3
I’d be willing to bet there are some high school teams out there that could compete with Colorado. Seriously, the Buffs have only won 3 conference games in their two years in the Pac-12. I don’t anticipate that number growing in this late-season matchup.

Nov. 30, UCLA:
We predict: L, 31-28 (OT)
For the first time in sixteen years, the Bruins will finally beat the Trojans at the Coliseum. Not only is UCLA even better than it was last year, but a tough October stretch at Stanford and Oregon back-to-back could have them out of Pac-12 title contention late, meaning this game will be their championship. A missed field goal by Andre Heidari in overtime leaves Kiffin not quite on the hot seat, but not exactly off it, either.

Think I’ve got it wrong (or right)? Leave your own predictions in the comments section below.