Home Uncategorized Foam Finger: On the Topic of Point God 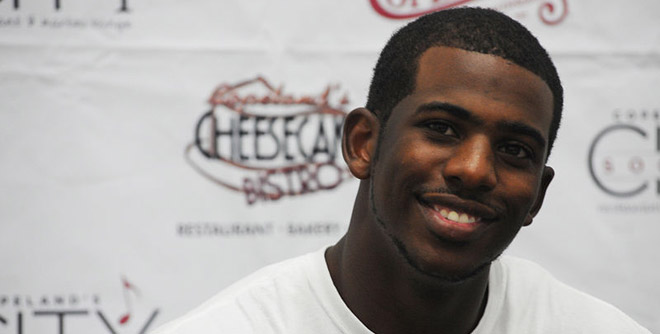 Whether it’s his on-court iso domination, his nonpareil L.A. leadership, or the absurdly cute clips of his son (“Little Chris”) at post-game pressers, Clippers point guard Chris Paul is taking the city by storm. I can’t seem to hear enough about the transplanted North Carolinian; there’s something new to read every day. Some media outlets have taken to calling him Point God. Presumptuous as the name might be (and theistic alignments aside) the moniker maintains some merit. Here’s a look at Paul’s exploits:

Recently
Wednesday night’s game against the Dallas Mavericks was textbook CP3. Paul finished the night with 19 points and a season high 16 assists, taking the Clippers to a 99-93 home victory over the Mavs. It was win number 28 for the season and number 13 for the squad’s home-game winning streak, now a franchise record. Behind Paul and fellow bigs Blake Griffin and DeAndre Jordan, the Clippers are officially tied with the Oklahoma City Thunder for the best record in the NBA, 28-8. (The defending champs in Miami trail at 23-11 in comparison, coming off a two-game losing streak.) Though there’s still time to fall from No. 1—as L.A. teams are wont to do—the Clippers show no signs of slowing down. Especially Paul, who, in Wednesday’s game made sure O.J. Mayo looked like a clown: he whipped out the same pull-back dribble he used to cross Kobe Bryant and knocked down the in-your-eye floater that is quickly becoming a signature look for him and a surefire nightmare for opponents. Needless to say, L.A. hasn’t seen a point guard of Paul’s stature for quite a while—and I can still hear Lakers fans complaining (rightfully so) about how he ended up on the wrong team. Paul’s gunning to be the leader of the NBA; some would argue he’s doing so in a singlehanded fashion.

Looking Back
This season’s endeavors are nothing new for Paul. Behind the assists, steals, and jumpers is a seasoned, seven-year veteran. Though Paul’s C.V. doesn’t include national championships, it’s chock-full of endorsements, All-Star appearances, All-NBA First-Team noms, Olympic gold medals, assists titles, and steals titles, among other accomplishments. Paul was rookie of the year in 2006, when he started his career with the New Orleans Hornets. Since then he’s climbed the point guard ladder. Now he has his sights on the NBA’s most valuable player award. As of late, Paul ranks No. 1 on nba.com’s KIA Race to the MVP Ladder, beating out fellow superstars Kevin Durant, LeBron James, and Carmelo Anthony.

“I don’t know if there’s another player who is as critical to his team’s bottom line as Chris,” said a former Eastern Conference general manager in a release. “Think about it: take LeBron off of his team, Durant off of his team, or Carmelo off of his team and they’re still going to be playoff teams and teams that have to be reckoned with. The Clippers don’t have that luxury with Chris.”

Paul helmed a similar effort during his tenure in New Orleans, where he—the team’s key player—spearheaded Hornets playoff campaigns in ‘08, ’09, and ’11. Much like the Clippers of now might, the Paul-era Hornets floundered in his absence. It wouldn’t be hyperbole to call him the best point guard in the league, but for him, there’s more at stake.

A New Year’s Resolution
As the history books have it, Paul is one of the most dominant point guards to have set foot on hardwood; he is the fifth player in NBA history to lead the league in assists and steals in the same season, the only player to lead in assists and steals in consecutive seasons, and the third-ever player to maintain the highest average of assists per game in his career, trailing only John Stockton and Magic Johnson. Still, Paul is up against the same criticisms maestros like LeBron James have faced. James took the league and Cleveland by storm, transforming a pathetic franchise into a multiple-season playoff contender, but always, he heard: A king without a ring is no king at all. Nine seasons and one doozey of a trade later, King James silenced his critics. Paul has the chance to do what James couldn’t: to get a ring for himself while playing for a franchise that has wallowed as the little brother that nobody cared about.

A lot of pressure comes with being a ringless star—(I’ll never forget Kevin Garnett’s championship reaction, that weird combination of relief, realization, and elation)—but Paul has the opportunity to take the franchise, fans, skeptics, and haters to uncharted territories—a journey that, if successful, would make Point God a casual calling card.

The Los Angeles Clippers square off against the Orlando Magic today at 12:30 p.m.