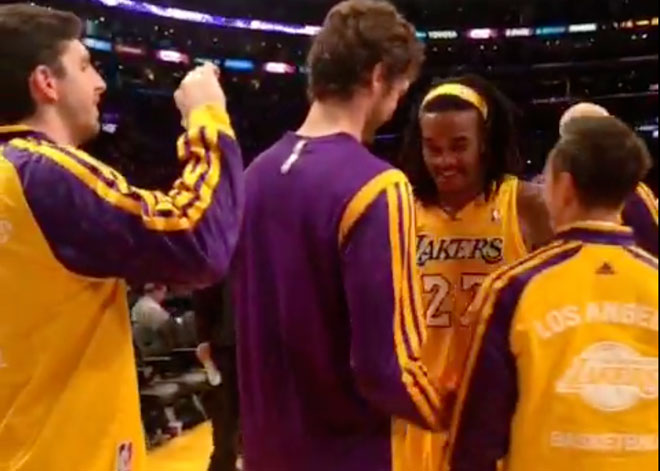 The Lakers celebrate a win against the Clippers

On Tuesday night at the Staples Center, the Lakers looked just fine. Without Dwight Howard, without Kobe Bryant, they looked like a playoff team, and they did it against the Clippers, a team many predict to be in the 2013-2014 NBA title conversation. As the home team, the Lakers also had their banners uncovered for the night, Doc Rivers be damned.

For a team whose depth was seriously called into question before the start of the season, what a turnaround Tuesday was. The Lakers struggled to get production out of anyone not named Kobe Bryant last season, but got it from all ends of the bench this week. The team sank nearly half its shots from long range and short range, and outscored the Clippers by 17 in the fourth quarter to seal the deal.

Just a night later, the Lakers looked to be struggling with a patch of imaginary mud on the floor of the Golden State Warriors’ Oracle Arena. They simply couldn’t find a way to stop guard Klay Thompson, who finished the night 15-of-19 shooting for a game-high 38 points. Their legs looked to be out of oomph and they lost the rebounding contest by nine. The bench failed to produce a second miracle, scoring just 52 points to the starters’ 42.

In a matter of two days, the Lakers went from “they’re back, baby!” to “I’ve seen this team before.” But should we be that let down?

No matter how well-conditioned the Lakers are, they were facing an uphill battle against the Warriors, having won an emotional, high-intensity game the night before and having to gear themselves up for a fresh opponent. Even the best of NBA teams would struggle to win both games in that kind of a back-to-back lineup, and after Wednesday, it’s not certain the Lakers fall within that group. Right now we have hope—and we have questions:

Each question is tough to answer. Two games into the season, we’ll just have to wait and see.