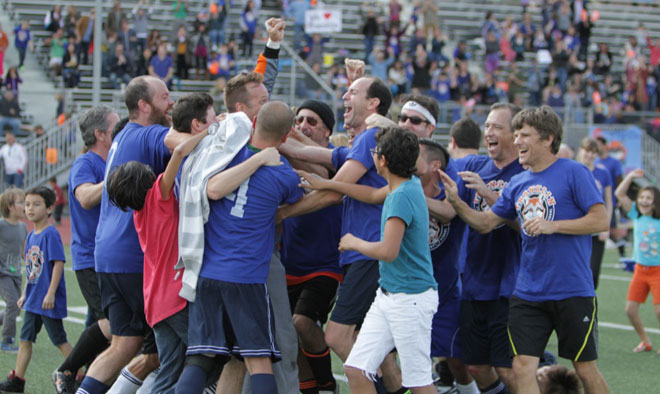 Hands were broken. Hamstrings were pulled. Shoving matches ensued. Palpable drama abounded at this weekend’s… community soccer game. The second annual Los Silverlake Soccer Showdown—a family friendly school fund-raiser for the Franklin and Ivanhoe elementary schools—turned into a fierce display of mid-life competition, with parents and teachers of both schools pitted against each other. At stake: on-field pride and off-field bragging rights.

More than 500 spectators and supporters turned out for the game, which took place Saturday morning at Marshall High School Stadium—a neutral site, where many of the kids from Franklin and Ivanhoe will inevitably converge.

Ivanhoe started the match out strong, scoring off a slightly contested penalty shot and holding the lead held deep into the second half. But an unbelievable Beckham-esque kick, which some argued was really an accidental cross-turned-miracle-goal, from Franklin’s very own Robert Tannen banana-ed into the upper V and served as a last-minute equalizer, pushing the game into two five-minute overtime periods. Neither side scored in OT, sending the Ivanhoe Dragons and the Franklin Foxes into penalty kicks. In the end, the Foxes came out on top.

More important than the on-field theatrics are the off-field benefits: Several thousand dollars were raised for both schools, with ticket sales of $2 per person plus sales from an In-N-Out truck, donated drinks from Whole Foods, and an epic after party at Silver Lake’s Hyperion Public.

After the big game, Woody Thompson, the captain and organizer of the Ivanhoe Dragons, opened up about one of L.A.’s highest anticipated local grudge matches.

What were some of the highlights?
We purposely had this 45-minute-long halftime so that we could have a game, pitting the Ivanhoe kids against the Franklin kids in a game of soccer volleyball, which ended up just being this huge maul—it quickly turned into kids rolling on top of each other for 15 minutes. And then we put on Gangnam Style and invited everyone out on the field and did a one-song dance party that relieved all the tension. The dads desperately needed that 45-minute break.

How much money did you raise?
We’re still counting. We raised $5,000 out of the door, and that also includes [money from] the raffle and In-N-Out. But it doesn’t include Hyperion Pub or swag.

Where will the funds go?
Money goes to both Friends of Ivanhoe and Friends of Franklin, which are fund-raising organizations attached to these two LAUSD schools. They raise money on their own to support these schools, which don’t have gym teachers, art classes, enough librarians—they don’t even have maintenance people full-time. So they support all the activities that LAUSD no longer funds.

How different was this year’s cup from last year’s?
Last year we raised $300, I think, because I overcharged players for their jerseys. We didn’t know what to expect. We thought it was going to be a friendly, fun match that everybody played, and Franklin destroyed us, 4-1. They had a couple ringers that I will never forget: some guy with a mustache and red shoes. We never got his name because nobody had names on their jerseys, but we spent an entire year trying to get that guy. Now I’m getting kudos and some hate mail from parents and players about how competitive it is. Some people are saying it should be less competitive, and other people are saying we need to be training starting tomorrow for next year’s game.

So there will definitely be a rematch next year?
Oh God, yeah. The only question is how we can make it more inclusive and raise even more money.

Aside from the fund-raising, what draws so many families to the competition?
For these dads who don’t participate like their wives do in the schools and don’t know each other that well (we’re all out of shape and we’re all ex-athletes and we’re all in mid-life crises), to meet for 10 weeks on a Saturday afternoon and do something for yourself and see that you’re just as out of shape as your neighbor and the guy at school in the pick-up lane and you’re all struggling to breath and get in shape—it has been huge.

Sounds like you’ve created a new community.
I’ve been here for nine years, and I came here and tried to find a town or a community where I felt like I was a part of something. It’s very hard to find that in L.A. I didn’t know where to live. It’s a confusing place. There’s no town hall in these places, so it’s about community building and a friendly rivalry to recognize that there are, in our case, two very good elementary schools on the East Side, and everybody wants to go to these schools bit we don’t even talk to each other. This gives us a chance to talk about what we have in common.