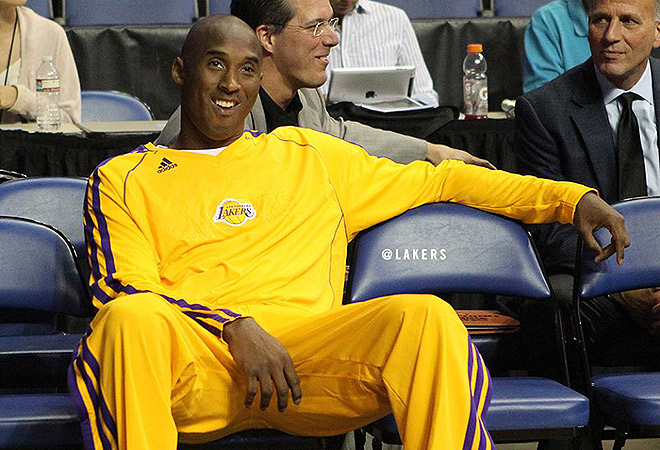 When Kobe Bryant tragically tore his Achilles tendon last season, few were shocked. Injuries are what we have come to expect of players entering the twilight of their careers—especially when forced to play upwards of 40 minutes a night.

In the months that followed, the Black Mamba rehabbed obsessively, eventually putting up jumpers, jogging, and finally driving the lane without hesitation.

Speculation as to when he might return swirled incessantly in recent weeks. For every “Kobe looks great,” there was a pundit doubting whether it would be possible for the five-time champ to make his return before 2014.

Finally, the Lakers announced last Friday via their Facebook page that Kobe would make his season debut on Sunday against the Toronto Raptors. They also released an accompanying video that was intended to symbolize his epic comeback (but fell well short).

In the video, Kobe Bryant’s No. 24 jersey waves in the wind as it is exposed to the “Seasons of Legend”—weathering sleet, snow, hail, rain and even lightning. You name it, Kobe’s jersey, hanging on an invisible hanger, has seen it. For the longest two minutes and eight seconds, this video stretches on. Bryant never appears, nor is there dialogue of any kind. Just 125 seconds of a yellow Lakers jersey flapping back and forth before a few slides that read “THE LEGEND CONTINUES…DECEMBER 8.” A simple tweet would’ve worked, but thanks.

As we saw Sunday night, Kobe’s triumphant comeback unfortunately wasn’t much better. In 28 minutes against the lowly Raptors, he appeared to be more of a garter snake, air-balling his first hook shot attempt and finishing the first half with just five points. Kobe added just four more points in the second half and missed seven of nine shots from the floor.

As it turned out, the Monday in between his first two games of the season offered plenty of time for Kobe to rid himself of iron oxide. As only he could, No. 24 looked, well, sort of like Kobe again on Tuesday against the Phoenix Suns.

In just one more minute than he played on Sunday and against a team with a far better record—actually a winning record, go figure—Mamba’s touch was much improved; he shot a respectable 6-of-11 and made 8-of-8 free throws for a total of 20 points.

Still, the Lakers lost both games. They went 10-9 without Bryant in the lineup and are now 0-2 with him. But I don’t believe for a second that these Lakers can’t make a push in the final three-fourths of this season. After all, in his one-and-a-half games since announcing his return, Kobe does have the team’s best scoring average.

I think their real test will come in the next couple weeks, as Bryant works himself back to full playing shape. Then we can truly gauge how good this team is with all of its pieces working the way management intended. Holding their own against the Thunder in Oklahoma City this Friday would be a terrific start.

For now, though, Kobe’s back, and that’s as great as any win I can of.