Home Uncategorized Foam Finger: Kobe Bryant’s Got A Brand New Nickname. Will It Get... 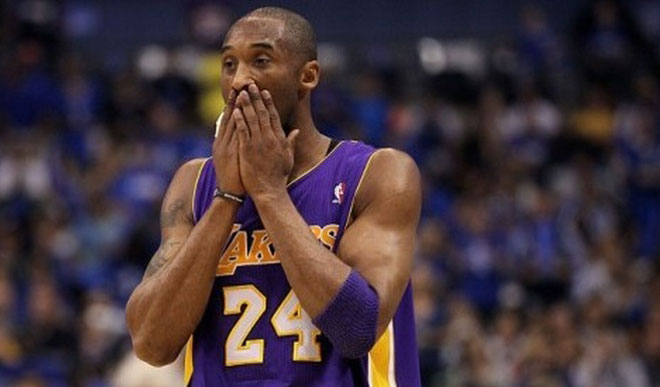 Must See, The Great One, The Prophecy, Eighth Wonder of the World, The Kloser, Kobe Wan Kenobi, Mr. 81, Lord of the Rings, The Dagger, Izzo, Black Mamba, KB24—the list of nicknames for Kobe Bryant is long enough as is. Well, make room for another one. After the Los Angeles Lakers star lifted the Purple and Gold to a one-point win Sunday over the Atlanta Hawks, Bryant coined a new name for himself. If you missed the game, find a way to watch it. Bryant ditched his role as facilitator and defied Father Time, scoring 11 of his 34 points in the fourth quarter and dazzling Staples Center with highlight after highlight, including a buzzer-beater 3-pointer at the end of the third quarter, two clutch free throws at the close of the fourth and a game-winning bucket. Best of all was Bryant’s emphatic “retro” (ß his term) dunk over Hawks big man Josh Smith. “The vino,” he said after that play, “is out of the barrel.”

The Lakers have won thirteen of their last eighteen games, boosting them to, finally, a break-even record of 30-30. That’s right, folks. The Lakers are at last a .500 team. But is it all thanks to Vino? Not necessarily. Kobe played a great game Sunday night, but let’s not blow it—and his new nickname—out of proportion. It’s a well-deserved title, indeed. But that’s all it is: a name. Here are other factors to consider:

1. Atlanta is 33-26, not much better than the Lakers, and not even close to the likes of the Spurs, the Heat, the Thunder, and the other Big Boys of the NBA. Vino might be able to defy expectations against teams like the Hawks, but when it comes to the premier teams of the league, they have the defensive gusto and offensive prowess to shut him down and make Mike D’Antoni’s squad pay.

2. The Lakers are now chasing the Utah Jazz, which recently lost to Milwaukee, 109-108 and are sitting in the—I can’t believe I’m saying this—coveted eighth seed. The Lakers have twenty-two games left to play, as do the Jazz, so it’s not impossible for L.A. to snag the spot. Teams in similar positions such as Golden State and Houston could hiccup, though Stephen Curry and James Harden have put their teams in favorable positions. I’m not saying that we won’t see the Lakers in that eighth seed (or even better) spot, I’m just saying, look where we are now. We’re off the map.

There’s nothing I love more than seeing Bryant pull off crunch-time wins, especially when there’s a hand—and all the odds—in his face. But that type of play isn’t going to cut it in a couple months. Or next year for that matter. So let’s get over the fancy-sounding nickname. It would be much more exciting if instead Dwight Howard or Steve Nash got some new calling cards. They’d have to earn them first, of course.

Up Next: The Lakers play a road game against the Oklahoma City Thunder tonight at 6:30 p.m. PT. OKC leads the regular season series 2-1.